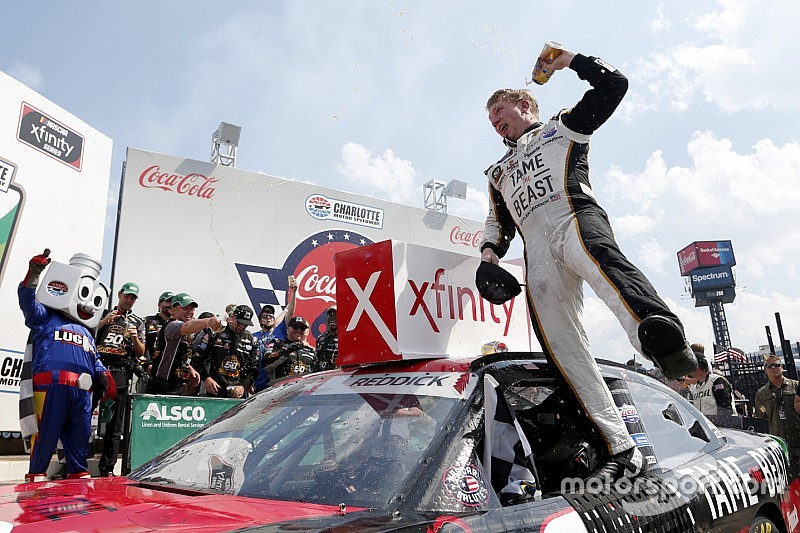 Reddick overcame a wild run of restarts and brutal temperatures to hold off Justin Allgaier to win Saturday’s Alsco 300 at Charlotte Motor Speedway.

The win is the second of the season for the Richard Childress Racing driver and fifth of his NASCAR Xfinity Series career.

Allgaier made a charge on Reddick on the final restart with slightly fresher tires but after a couple laps began to drop back. “Sorry boys, this is all I got,” he told his crew over the radio.

"Hats off to all of Richard Childress Racing," Reddick said in Victory Lane after dousing himself with fluids. "We were pretty good going into the two off-weeks but we weren't really happy with where we were and they worked really hard and worked on a couple things and we were so good when we came back here to Charlotte.

"I'm just so pumped about the work ethic of everyone at the shop and the guys here with me today They just worked their tails off. We held off Justin Allgaier who is really tough to beat.

"I won at Charlotte - what a great day!"

With 70 of 200 laps to go in the race, Reddick enjoyed a more than 3-second lead over Cole Custer. Chase Briscoe was running in third, Gragson fourth and Allgaier in fifth.

On Lap 141, a flat tire sent Earnhardt into the wall in Turn 4 which brought out a caution. Reddick was the first off pit road followed by Briscoe, Custer and Allgaier. The race returned on green on Lap 147.

With 44 laps remaining, Josh Williams and David Starr got together off Turn 4 to bring out a caution. A handful of lead-lap cars pit but Briscoe stayed out and inherited the lead.

During the stops, Daniel Hemric got in the No. 10 Chevrolet to relieve Austin Dillon, who had suffered damage to the crush panel on his car. “Hydration is good, just couldn’t take the heat, it’s hot,” Dillon said. “I didn’t want to kill myself today ahead of tomorrow.”

On the restart on Lap 163, Briscoe was followed by John Hunter Nemechek, Allgaier, Michael Annett and Gragson. Nemechek powered to the lead shortly after the restart.

Reddick ran down Nemechek to reclaim the lead on Lap 167.

Nemechek hit the wall again in Turn 2 on Lap 169 to bring out another caution. Reddick, Custer, Jeb Burton and Brandon Jones elected not to pit while Briscoe was the first off pit road among those who pit. The race returned to green on Lap 178.

In a three-wide move, Custer moved to the lead on the restart as Jones grabbed second.

On Lap 180, Williams spun again off Turn 2 which brought out a caution. Just before the caution Briscoe tagged the wall and was forced to pit under green with a flat tire. On the restart on Lap 186, Custer remained in the lead.

After a wild restart, Reddick returned to the lead as Allgaier, on newer tires, moved into second.

Reddick held on for the Stage 2 victory after a wild finish as two top contenders both tagged the wall.

Briscoe ended up second, Gragson was third, Nemechek fourth and Annett was fifth.

Following the break between Stages 1 and 2, Jones was the first off pit road and led the way when the race returned to green on Lap 55. He was followed by Reddick, Christopher Bell and Gragson.

Custer had run over debris right before the conclusion of the first stage and required repairs on pit road. He lined up 19th on the restart.

Gragson gave Jones a push on the restart and powered into the second position.

On Lap 67, Austin Cindric spun off Turn 2 to bring out a caution. Most of the lead-lap cars elected not to pit and remained in the lead on the restart on Lap 72. Custer made another trip down pit road for addition repairs.

With a push from Gragson, Reddick moved into the lead following the restart as Jones dropped to second.

With 10 laps to go in the second stage, Reddick held a small lead over Jones as Bell moved back up to third.

With two laps remaining, both Bell and Jones tagged the wall, with both suffering severe damage to their respective cars.

Once he reclaimed the lead, Bell had little trouble holding off Custer to take the Stage 1 victory.

Reddick was third, Briscoe was fourth and Jones completed the top-five.

Bell started from the pole but Custer powered to the lead going to the bottom grove on the first lap.

Through 10 laps, Custer held a small lead over Bell with Reddick having moved into third.

On Lap 16, Bell went low off Turn 4 and by Turn 1 and gotten around Custer to take the lead.

Caution was displayed on Lap 17 when Timmy Hill’s engine let go and dropped fluid on the track. Matt Mills spun in the fluid as well.

On the restart on Lap 24, Bell remained out front followed by Custer, Reddick, Jones and Dillon.

With 15 laps remaining in the first stage, Bell maintained a solid lead over Custer while Jones had moved into third.

Bell held about a 1-second lead over Custer with five laps to go while Reddick had moved back up to third.

Four cars – those of Bayley Curley, Brandon Brown, Justin Haley and Ross Chastain – started the race from the rear of the field after making unapproved adjustments following qualifying.