Gaffney – Mike Wallace and the No. 01 SB Ballard Construction Chevrolet team of JD Motorsports w/Gary Keller completed all 250 laps in Friday night’s NASCAR Nationwide Series race at Richmond International Raceway. They even led two of them.

However, they would have liked to have a better showing for their lead lap finish when the checkered flag waved over the 43-car field.

After being 28th in the only practice session at the .75-mile oval, Wallace qualified 31st for the race. Once the initial green flag flew, he methodically moved his way up the scoring pylon taking over positions to run 26th by lap 20. 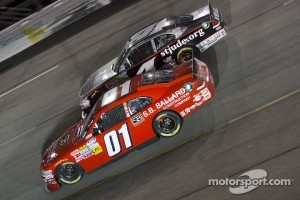 Through the next 50 laps, the St. Louis native would keep to the game plan laid out by crew chief Newt Moore and team. In doing so, they kept moving using a lap 117 caution to make another pit stop for tires, fuel and adjustments.

Restarting 23rd, Wallace kept his trek forward on track with an eye on more positions to gain. As the laps ticked down, the team did go down one to the leaders past the halfway point while running in the top-25 positions.

A multi-car incident in turn 2 on lap 156 brought out the red flag for 4:06 minutes for all the competitors. When the debris was cleaned up, Wallace was rewarded the Lucky Dog to return to lead-lap action.

He capitalized on that and was soon running in the top 20 making his way to 18th on lap 177. After another caution on lap 187, the team elected to stay out and led two circuits around the track.

After pitting, they would restart 17th on lap 193 when the green flag waved. More cautions brought the field together and moved Wallace up the scoring pylon to 15th place.

A late-race caution brought forth one more opportunity to pit. Wallace radioed to his crew he wanted four fresh tires for the end to keep the forward momentum going and gain even more positions.

However, the tires didn’t agree with the car or the track and he ended up losing what he was hoping to gain from the stop. Thus, the team came under the checkered flags in 21st place.

The finish did help them in the points as Wallace remains in 12th, but is now only 15 markers from 11th place. This weekend, the NASCAR Nationwide Series heads to Chicagoland Speedway.

Mike Wallace Quotes: “We started out being pretty average, but we weren’t going backwards, either. We managed to get down a lap, get back on the lead lap, lead a lap and finish on the lead lap.

“The car started to get much better towards the end I just wanted to finish the race on fresh tires to pass as many cars as possible. I wanted the good finish, but the tire deal didn’t work out the way we wanted and it cost us at the end.

“We had a four-star general holding our pit board tonight in Gen. Richard Meyer, former Joint Chief of Staff for the United States; which was pretty cool. I’d like to thank the folks from SB Ballard Construction for coming on board and being with us at the race, as well.

“We had a great car at the end, but not the results we deserved when it was over. We’ll go to Chicago next weekend and look for a good run for our team.”

Annett maintains his position in the points after Richmond

What time and channel is the NASCAR playoffs at Richmond