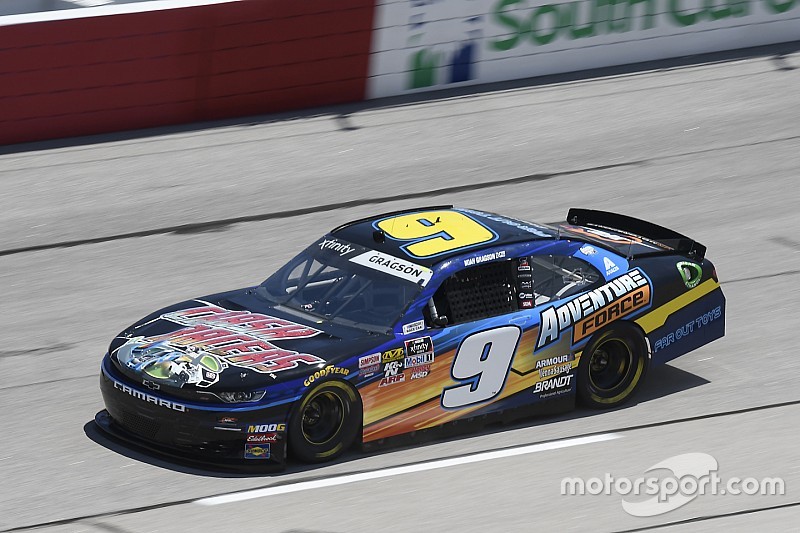 The timing couldn’t be better for Noah Gragson.

The 21-year-old NASCAR Xfinity Series driver for JR Motorsports believes he has one of the best race cars he’s had all season at Darlington (S.C.) Raceway, and what better time to showcase it than alongside his team co-owner, Dale Earnhardt Jr.

Since his retirement from fulltime competition at the end of the 2017 season, Earnhardt has been competing in one Xfinity Series race per season. He picked Darlington this season, which also coincides with his first return to a track since he and his family escaped a fiery plane crash earlier this month in Tennessee.

You tell a 19-year-old Noah that Dale Jr. is going to drive your car one day or you’re going to be driving Dale’s car – I never would have dreamed that.

Gragson tested at Darlington several weeks ago and Earnhardt took a few laps in his No. 9 Chevrolet to acclimate himself to the track.

Upon their return Friday, Gragson ended up fastest in the final practice session and Earnhardt was 10th-quick.

“I loved it. I wanted to see how I stacked up,” Gragson said of sharing time with Earnhardt at the test session. “He gave me a lot more credit than I think I deserve. He hasn’t been in a car in about a year or so. I think he did a really good job.

“I consider him a buddy now. You tell a 19-year-old Noah that Dale Jr. is going to drive your car one day or you’re going to be driving Dale’s car – I never would have dreamed that.”

Gragson said he’s leaned on his JRM teammates Justin Allgaier and Michael Annett extensively this season, but has developed a special relationship with Earnhardt.

“There’s something about the way Dale and I have been communicating – I feel like we’re on the same page with everybody – but it’s just like we’re really in tune with each other,” Gragson said.

“Whether is about life advice away from the race track or discussing the balance of the race car, he’s been a really good teammate. It’s great having his experience. Just being able to lean on him has been really good for me.”

Gragson has yet to win this season but is seventh in the series standings behind six top-five and 14 top-10 finishes, putting him firmly into the series playoff grid.

But Saturday, Gragson said he believes he’s going to be “one of those guys” who should contend for the win.

“I’m really comfortable. We spent two days down here (testing) and that really helped with my confidence,” he said. “I feel like this weekend is the first time this season I’ve had this amount of confidence in how comfortable I am getting to a race track.

“Through practice I was so close to being perfect. You never get a perfect race car, maybe once or twice in your career. Right now, I think we’re one adjustment off from getting there.

“I got little excited with telling the crew chief, ‘You need to do this and that and wedge and track bar’ that I kind of dialed myself out. We’re really close so I’m going to try to stay off the wall, run up front and try to put on the best show possible.”