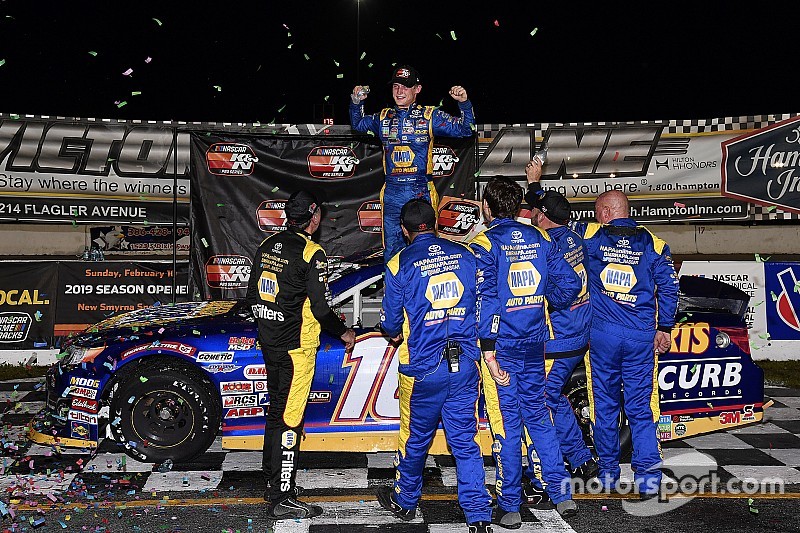 K&N Pro Series West Series driver Derek Kraus made a daring pass for lead and held on after a late caution to pick up his seventh career win.

K&N Pro Series West Series driver Derek Kraus made a daring pass for lead and held on after a late caution to pick up his seventh career win.

Derek Kraus took advantage of Colin Garrett and Ty Gibbs bumping each other while racing for the lead on Lap 134 and took the top spot for himself and held on for the victory.

The sixth and final caution of the race flew when Brittany Zimora spun in Turn 1, setting up the 10-lap dash to the finish.

Gibbs held on for second with Brandon McReynolds placing third. Sam was Mayer fourth and Anthony Segi rounded out the top five.

“It’s a really good car BMR brought me here, but we struggled a lot to be honest during practice and we didn’t get to do our moch runs,” said Kraus. “We had to start the race deep in the field but once the race started I knew we had a pretty good car underneath me.”

Kraus, who won four times last season driving for Bill McAnally Racing, started the race 16th after qualifying was washed out on Sunday and the rain also postponed the race until Monday night.

“It helps to have someone good like (spotter) Freddie (Kraft) in my ear every lap telling me to not burn the right rear of this thing (car). We had a plan to come in on the front break and stayed out the second break. Track position is big here and it’s pretty tough to pass, but if you have a good turning car like I did it’s easier (to pass).”

Hailie Deegan started the race from the pole position after the starting lineup was set per the NASCAR rule book but she quickly fell back, allowing Chase Cabre to take the lead by Lap 7.

Cabre remained out from until Drew Dollar passed for the lead on Lap 13. Cabre retook the lead once more but fell out of contention with rear end problems on his car ending his chance for the win.

Dollar got back to the point where he remained until Garrett took the lead and eventually lost it with his door-bagging battle with Gibbs allowing Kraus to the lead for the remainder of the race.

The K&N Pro Series East will return to the track in early April when they visit Bristol Motor Speedway for the first of two races there this season on April 6th.