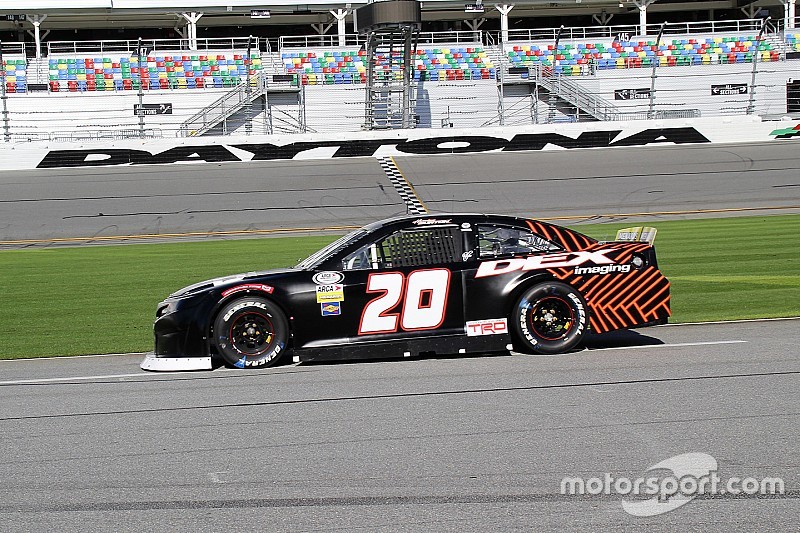 For Harrison Burton, trips to Daytona Beach, Fla., have always been as a visitor, generally to be on hand because his father, Jeff Burton, was competing in NASCAR events.

This year is different.

This is Harrison’s time.

While Harrison is a former K&N Pro Series East champion and has competed in more than a dozen races in the NASCAR Gander Outdoors Truck Series, 2019 will mark his first fulltime season in a national series.

He will run the entire season in the No. 18 Toyota for Kyle Busch Motorsports, competing not only for rookie of the year honors but also for the series championship.

That’s a tall order for an 18-year-old, but it’s what he’s been dreaming of since he was old enough to decide racing was his career of choice.

Burton took his first laps as a competitor on Daytona International Speedway on Friday, the first of a two-day ARCA test.

Burton is running five ARCA events with Venturini Motorsports this season in addition to his Trucks schedule and the Daytona season opener during Speedweeks was mandatory in preparation for his Truck series debut at the track.

“I’ve been here like 10 to 15 times, watching my dad and my uncle (Ward Burton) race and my cousin (Jeb Burton) race. It’s just weird for me to get in a car and be able to do it,” Harrison told Motorsport.com.

“This is a lifelong dream coming true to race at Daytona just because of what it means for our sport, its history and where we come from. This place means a lot to us and our fans. To be a very, very small part of that is really cool for me.

“I’ve been waiting to turn 18 for a long time and I finally made the cut, so I guess I can finally run with the big boys now, right?”

Burton said the track time at the ARCA test this weekend has been invaluable, especially for someone who has never competed in a superspeedway race.

“It’s a whole new ballgame. Single-car runs are pretty straightforward but the draft consists of a lot of little things that you may never think about that mean a ton,” he said. “You watch the guys that really do it well and most fans and many in the sport have no idea of all the things they are doing every second that help them.

“Having people like my dad and Blake Koch – he’s my driving coach now – and my dad’s always been my driver’s coach, having people who know about that stuff is so helpful for me.

“I feel it gives me a leg up on some of the other rookies. I still have to find a way to make up for years of experience, but we’ll find a way.”

Burton has experienced success throughout his racing career.

Burton made his debut in the Truck Series with KBM in 2016 at Martinsville, Va., shortly after turning 16 years old. In 14 career Truck starts, he has won one pole and posted three top-five and seven top-10 finishes.

While Burton clearly has NASCAR experience, his first full season in the Truck series will essentially kick off and help define his legacy in a sport in which his family has played such a large role.

To help fans understand how much this moment means to him, this week he debuted the first of what will be a series of videos chronicling his 2019 season.

“It’s daunting, exciting, nerve-wracking, everything you can think of,” Harrison said. “I’m at the doorstep of being able to do this for my career. This is the path you take, competing in the Truck series.

“It’s so exciting for me to be able to go out and know I’m going race for a championship this year with Kyle Busch Motorsports equipment, it’s awesome. What a great opportunity.

“While we’re talking about all this, my stomach is getting all antsy. I’m ready to go. I’ve tried to take it to another level of preparation. I always try to put a lot of work in but now it’s really become a daily thing.”

There’s certainly a lot on Harrison’s plate this season – launching a fulltime career, winning races or even a championship.

Every team or driver enters a new season with goals, but how do you approach a year with so much on the line?

“I have to stay focused on the now. I can’t get caught up in what is coming in the future,” he said. “You have to do what you can do now, and that’s all you can do.

“I’m super-excited to get to race in the Truck series. We finished the season pretty strong running last four races last season. Last year was hard for me because I was in a different car every weekend.

“It was kind of hard to feel you had a home, but no more.”

The days of watching his uncle and dad race have past for Harrison.

All the preparation, the trips around the country racing in hopes of one day earning the opportunity to compete in NASCAR, the film watching, the workouts – all of that has finally come to a destination point.

Next month, Harrison will take to the track in search of his first Daytona victory.

This is his time.