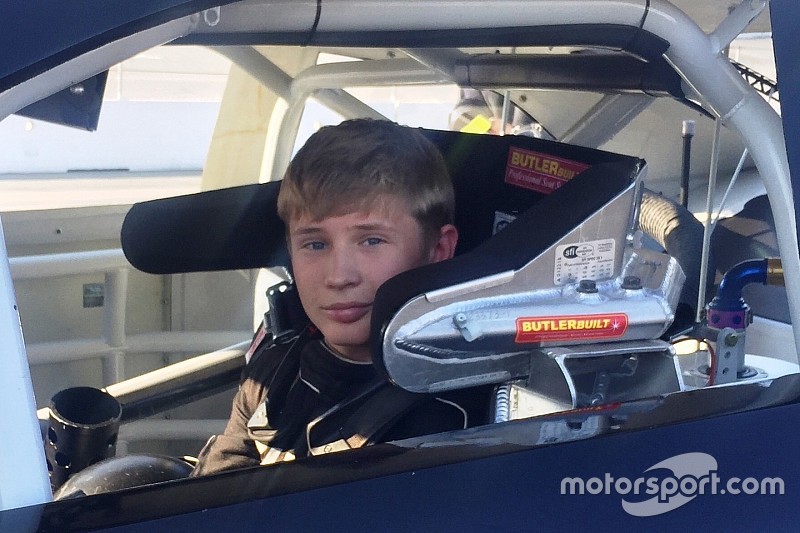 Entering the race at Kern County Raceway Park in his hometown of Bakersfield, Calif., Harvick had won the past four NASCAR events he had entered this season – the Xfinity race at Atlanta and the last three Monster Energy NASCAR Cup Series races.

He was well on his way to a fifth consecutive victory at Kern County, winning the pole and leading the first 132 of 175 laps.

That was until Derek Kraus, last season’s West series rookie of the year, got three-wide on the race’s final restart and shoved Harvick up the track and out of contention.

Kraus went on to win the race, his second consecutive victory at Kern County.

“I was three-wide in the middle,” Kraus said of getting by Harvick. “It’s racing. You have to push through it. We ended up here in Victory Lane and that shows how hard our guys work.”

Kraus, 16, said he appreciated the opportunity to compete at a top Cup series driver.

“It was really good to race against him,” said Kraus, who started sixth in the race. “It’s a big learning curve. I rode behind him and Cole (Rouse). I learned a lot just from riding behind them.

“That’s what I think helped me in the later stages of the race. I kind of held back and saved my stuff better than they did.”

Asked if he was surprised about the final restart, Harvick said he “was surprised I got run over.” He ended up finishing fourth in the event.

“Going into (Turns) 3 and 4 inside of Kevin, I really didn’t mean to get into him. I thought we were three-wide and I entered a little higher than I normally would with a guy inside of me,” Kraus said. “I hate it for him, but that’s short track racing so you’ve got to get through that.”

The race will be broadcast on NBC Sports Network at 11 p.m. ET on March 20.