For the 12th season in a row, NASCAR recognized standouts during the NASCAR Diversity Awards program at the NASCAR Hall of Fame in Charlotte. 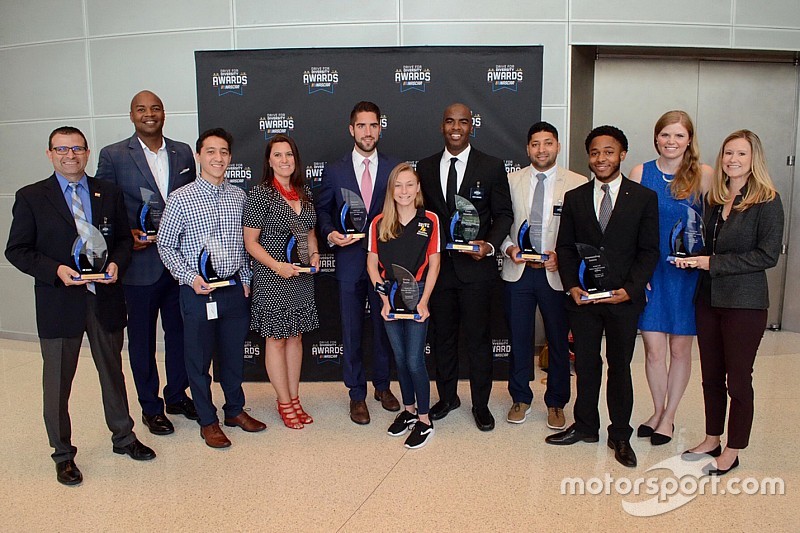 This week, NASCAR recognized those who have contributed to enhance the diversity events within the NASCAR community both on and off the track.

“There is shared commitment across the NASCAR industry to champion diversity and inclusion, and the NASCAR Drive for Diversity Awards celebrate the individuals and organizations whose contributions are making a difference,” said Steve Phelps, NASCAR president.

“We’re pleased to recognize this year’s award recipients whose efforts and accomplishments are helping drive our sport forward.”

The awards highlight exceptional accomplishments by diversity champions from across the industry, including participants of the NASCAR Drive for Diversity Driver and Pit Crew Development Programs and the NASCAR Diversity Internship Program.

Among those recognized was NASCAR Drive for Diversity Pit Crew member Derrell Edwards was the first graduate of the program to be part of the Daytona 500 winning team with Austin Dillon.

The Baltimore, Maryland native feels the importance of being a role model for young people like where he came from in the inner city.

“It’s very important for me,” said Edwards. “It’s emotional for me because I understand what it means to struggle and deal with adversity.

“I want the kids to understand and I tell them if I can do it they can.”

Edwards had other people he looked up to while growing up in Baltimore and never dreamed he would wind up in NASCAR when he was younger.

“I looked at people like Carmelo Anthony and my brother that I look up to (from my hometown),” Edwards. “I come from a place that who ever thought would a young man with NBA dream would wind up being a jackman in NASCAR. I would have never planned it that way.”

Edwards participated in the NASCAR Drive for Diversity Pit Crew Combine and thanked one of the sport’s most popular teams of all time for making his new career a reality.

“Without Richard Childress Racing I wouldn’t be here as I wouldn’t have known anything about Drive for Diversity,” said Edwards. “I did an internship at High Point University to get to NASCAR and it took one person to educate me about NASCAR and now I want that role to switch where I can educate people.”

National Series Driver Award: Martin Truex Jr. – The 2017 Monster Energy NASCAR Cup Series champion established the Martin Truex Jr. Foundation in 2007 with long-time partner, Sherry Pollex, with a mission to support those who have been affected by cancer, specifically ovarian and pediatric cancer. The foundation began its partnership with Levine Children’s Hospital in Charlotte, N.C., in 2015.

Partner Award: Dow – Dow’s commitment to diversity is highlighted through its program support and engagement with Richard Childress Racing.

Institution Award: The NASCAR Foundation’s Speediatrics Children’s Fund – The NASCAR Foundation’s Speediatrics Fun Day Festival began in 2017 as a small effort and grew to a multi-city program reaching hundreds of children. The event takes place in six race markets (Phoenix, Dover, Chicago, Daytona, Michigan and Martinsville) with more than 100 children participating in each.

Roundtable: Is All-Star win a turning point for Kyle Larson?