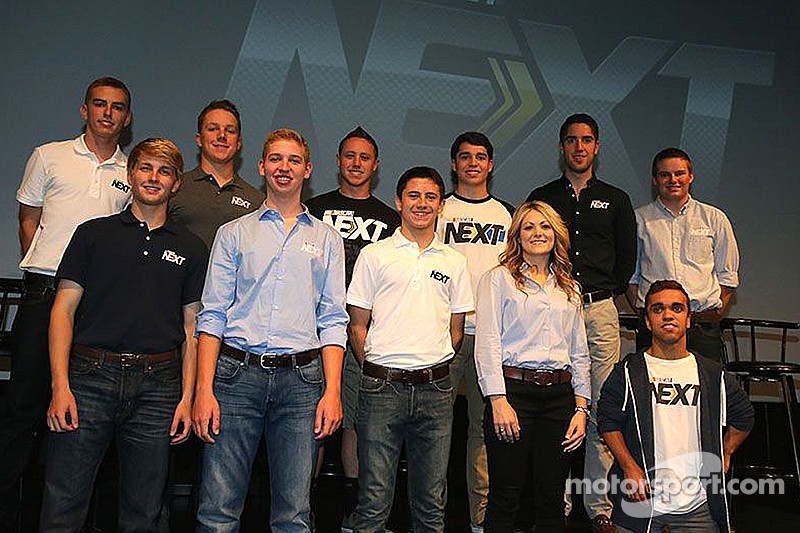 A dozen drivers from California to Florida represented in NASCAR's Next program.

NASCAR’s fifth and newest “Next” Class offers a few fresh and some more familiar faces on its roster.

These dozen drivers range in age from 23 to 17, many who barely have a driver’s license but are already winning races in their respective series.

“The NASCAR Next initiative spotlights the future of NASCAR, a collection of promising young talent who have shown the potential to one day reach the highest level of our sport,” said Jill Gregory, NASCAR senior vice president for Industry Services. “Alumni – and current members – of the NASCAR Next program are achieving success at the national series level, and we are confident that this class will build upon that foundation of excellence for many seasons to come.”

The Next team consists of drivers selected from NASCAR touring, weekly or one of the three national series by veteran racers and industry executives.

The program has graduated 21 drivers that have competed within one of NASCAR’s top three tours - Sprint Cup, XFINITY and Camping World Truck Series. Last year’s Cup rookie-of-the-year Kyle Larson, NXS rookie and champion Chase Elliott, Erik Jones, who has won on both the NXS and truck tours and will make his Cup debut this weekend, are among the celebrated alums.

Cole returns to the Next program this year, had a remarkable season in trucks last year even though at 17, the Ladera Ranch, Calif. native isn't old enough to run the full schedule. Custer earned the pole at Gateway in just his third truck start. In his seventh start, Custer became the youngest victor in National Series history when he won from the pole at New Hampshire. He finished his nine-race season with an average qualifying effort of 8.2 and an average finish of 10th.

Austin, 21, also continues in the Next program after completing his first full season in the K&N Pro Series last year. He finished fifth in the point standings after capping off 2014 with two wins. The Winston, Ga. native continued that streak by winning from the pole and leading every lap in the season opener at New Smyrna Speedway. Hill has dabbled in trucks and ARCA as well.

Jesse is enjoying his third season in NKNPS. The 18-year-old second-generation racer from Sherrill’s Ford, N.C., won at New Hampshire Motor Speedway last year and earned poles at Iowa and Dover. He posted four top-five and 10 top-10 finishes in 2014 to finish fourth in the season standings.

Ruben races south of the border in the NASCAR’s Mexico Series where he finished second in the 2014 standings. The 19-year-old Mexico City-native has one career-win (Aguacalientes, from the pole), nine top fives and three top 10 finishes. This season Garcia, 19, has three top 10 finishes with an average result of 6.3. Garcia has three NXS starts. His best finish was 25th at Phoenix.

Dylan finished second in the K&N West Series last season with one win, nine top fives and 14 top-10 finishes. He improved his average finish over 2013 by four positions. The 21-year-old Wilton, Calif.-native finished 19th in his NXS debut at Phoenix in February.

John Hunter caught the attention of many in the sport with solid runs in a limited truck schedule last season. In 10 starts, the second-generation racer earned one top-five finish at Loudon and six top 10 finishes. Nemechek, who turns 18 next month, will take over the family truck full-time. Nemechek also won the Snowball Derby last December at Five Flags Speedway.

Dalton won from the pole in his KNPSW debut at Kern County Raceway Park in Bakersfield (Calif.) in March. With a combined schedule that includes both East and West tours, the 17-year-old Boca Raton, Fla. native has four top-five finishes and two poles in five starts. Sergeant finished second to Nemechek in the Snowball Derby.

Nicole is the only racer representing the fairer sex - but don’t let that fool you. The 17-year-old from Otis Orchards, Wash., matched the series record for highest finish by a female driver in just her fifth K&N West start after finishing second at Irwindale Event Center. Behar has top-10 finishes in four of six West starts.

Kyle posted his first K&N Series win at Bristol last month. He’s currently third in the East standings with an average finish of sixth. The 17-year-old Roush Fenway Racing development driver from Easley, S.C., became the youngest victor in ARCA history when at 15 he won his first of two ARCA races (Madison International Speedway) with Venturini Motorsports in 2013.

James won rookie honors on the K&N Pro Series West tour last year. Bickford, 17, won at State Line Speedway and finished fifth in the series with eight top fives and 10 top 10 finishes in 14 races. The Napa, Calif. native currently has one top five and two top 10s  with an average finish of ninth.

William was victorious at historic Greenville-Pickens Speedway in just his second career start on the K&N Pro Series East tour. In his first season on the East tour, the 17-year-old Charlotte, N.C. native leads the point standings with one victory, two top fives and three top 10 finishes. His average result in the first three races is 3.3 with an average qualifying effort of third.

Remembering Gary Terry: 'He was one of the best'