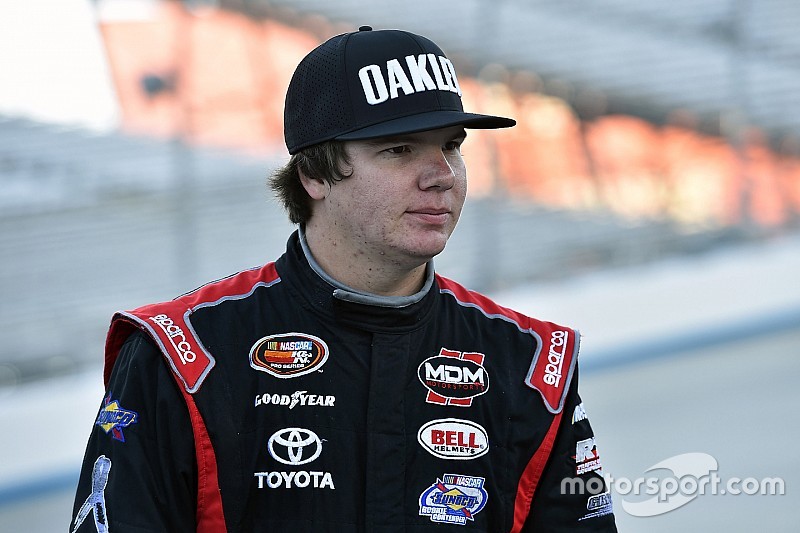 Sheldon Creed cleared the way to victory in the inaugural NASCAR K&N Pro Series West race at The Dirt Track at Las Vegas Motor Speedway after a cloudy start.

Extremely dusty track conditions contributed to an early wreck in Thursday night’s Star Nursery 100 and a red flag during which the track was re-watered.

Creed, the ARCA Racing Series points leader, started sixth and quickly made his way into the top-five, where he remained the remainder of the race.

Xfinity Series title contender Christopher Bell made his way to the lead late in the race after being involved in the early wreck but was black-flagged for a restart violation with five laps remaining.

That left Creed, who has extensive off-road racing experience, to inherit the lead and he held off pole-winner Hailie Deegan in overtime to earn this first victory in his seventh K&N Pro Series start.

“It rubbered up so it drives a little like an asphalt track. You have to drive it super-smooth. I’m pretty pumped. After practice I wasn’t sure how we’d be but I’m super-excited we came and I’m glad we put a deal together last minute.”

Creed will be going for his fourth win of the season as he competes again Saturday in the ARCA race at Salem (Ind.) Speedway.

For Deegan, Thursday night was her second runner-up finish of the season and earlier Thursday she became the first woman to win a pole in K&N Pro Series history.

“I knew it was going to be a struggle from the get-go, but that was difficult,” Deegan, 17, said. “I just kept overdriving it from the initial start. I dropped back, jammed the shifter from third to fourth.

“I think we chipped some teeth off the gears or something because it kept popping out of fourth every other lap or so. We had to battle that all night.”

The K&N West series last raced on a dirt track at Ascot Park in Gardena, Calif., in 1979.

Take a virtual lap around the dirt track at Las Vegas Motor Speedway courtesy of NASCARHeat 3 which is available to order now here:

NASCAR Roundtable: Can Dale Jr. win in his racing return?