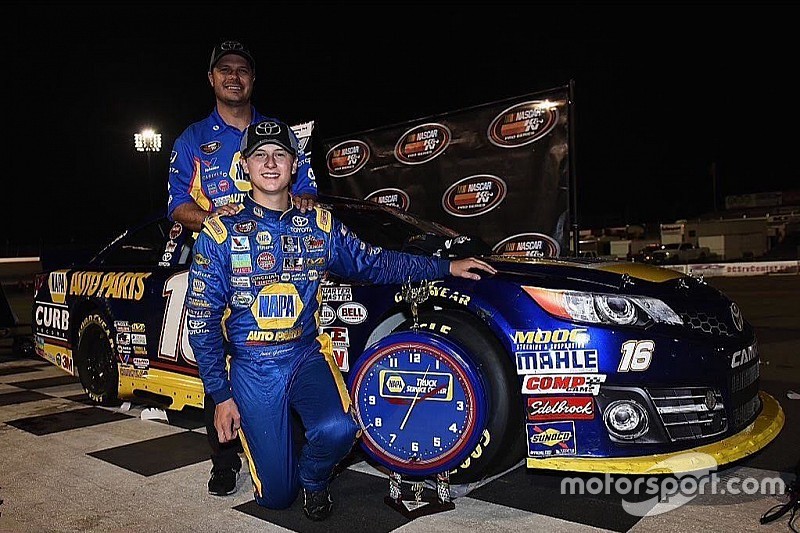 Todd Gilliland’s debut in the CARS Late Model Stock Tour season opener last year was nearly over before it began.

A couple of weeks after transferring to Liberty Prep — the 15-year-old racing phenom’s grades almost sidelined him from competition.

He’s got such God-given talent, he’s so smart, you forget that he’s 15

While his family doesn’t put expectations on Gilliland on the track, his off-track responsibilities are another matter.

“I almost missed the first race of the season — then I ended up winning the race,” Gilliland said. “I was very glad I was able to get my grades up at the last second to be able to race at Southern National in the CARS opener.

“It put a lot more responsibility on me as a student and making sure I got my work done. It was definitely a big adjustment, but I think I’ve got it down now.”

Gilliland can laugh about that now. So can his father David, who was on standby in case mother Michele put her foot down.

But it’s that type of discipline that has propelled the third-generation racer to the level of success he enjoys today.

“He’s making all A’s and B’s now,” David Gilliland said. “As soon as school is over, he’s asked (team owner) Bill McAnally if he can move to California and work at the shop over the summer.”

Gilliland currently drives full-time for Bill McAnally on the West tour. Two races into the NKNPSW season, Gilliland has a nine-point lead over Ryan Partridge in the standings.

On Saturday night, Gilliland will attempt to win his fifth consecutive K&N Pro Series race — in as many starts. In 2015, he won the West season finale at Phoenix last November then collected victories in the first two races of this season at Irwindale (Calif.) Speedway and Kern County (Bakersfield). Gilliland also won the East season opener at New Smyrna. His last three wins were all from the pole.

Although Gilliland grew up coming to Bristol Motor Speedway to watch his dad race, he admits the thought of himself racing at The Last Great Colosseum is “a little bit intimidating.” His father and spotter Jason Hedlesky, who serves the same role for Carl Edwards, has advised the young driver to just have fun.

“That’s pretty much what we’ve done this year and most of my whole racing career so far,” Gilliland said. “I think that’s what we have to focus on and just making the best out of whatever position we’re put in.

“I don’t think it should be that bad once we get out there and get into a rhythm. I’m just more excited than anything.”

Hedlesky has been friends with Gilliland family since Todd was seven or eight-years-old. Although Gilliland took time off from racing to play other sports, once he returned to quarter midget racing, Hedlesky says, “He won everything there was to win all of the time.”

“I watched Todd race quarter midgets and he was great,” Hedlesky said. “He won races and championships and when he turned 13, David said he was going to get him a Late Model just to do some testing. I thought, ‘wow, 13, that’s pretty young,’ but that was probably the right thing to do.

“So when our season was over we went to Myrtle Beach for a late model race. Myrtle Beach is tough. It’s a tough place to race. There was 130-some late models with two different divisions. There was the big race down there with late model stock cars and a 100 lap feature. Todd was the fastest of 123 cars and there were some Cup guys down there, some truck guys, a lot of awesome racers. And Myrtle Beach chews tires like Darlington but I said, ‘this kid is fast’. He finished second. He should have won the race but a caution came out on the last lap. But it was that race that he showed how much car control he had, how much speed he had and how much sense.”

Over the last two years as Gilliland’s spotter for events that don’t conflict with NASCAR’s top tours, Hedlesky has watched him evolve and mature. He guided Gilliland through his ARCA debut — which he won after starting fifth — and three of his four K&N wins (David Gilliland spotted at Bakersfield).

“He’s got such God-given talent, he’s so smart, you forget that he’s 15,” Hedlesky said. “He’s so far beyond his years that it’s — to me — a pleasure to watch him. It’s awesome. Todd’s a great kid, a respectful young man, works hard at what he does, has a passion.

“But it’s just his natural ability that God blessed him with is the only way I can describe it. None of these places he has raced at has been easy.”

Hedlesky acknowledged that Todd’s confidence is boosted by having great equipment and a solid support group. Before David retired from full-time Sprint Cup competition to guide his son’s career, he surrounded Todd with seasoned racers such as Matt Crafton’s dad Danny who oversaw his quarter midget program and the transition to late models. And for the last three years, Chris Lawson has been Gilliland’s crew chief.

Despite a  limited amount of on the job training, Hedlesky has noticed a marked difference in just the last year.

“He goes out there with far less experience than a lot of them, but now he’s getting that experience because David’s testing him and he’s driving for McAnally — a very awesome Toyota team on the West Coast — so he’s getting the seat time and the experience,” Hedlesky said. “But when I spotted for him at New Smyrna — the first race of the year — he went out and practice, did his thing but it was like he had flipped a switch. He went from being this 13, 14, 15-year-old bashful kid not saying much on the radio to giving all kinds of great feedback.

“That’s when I knew these guys were in trouble because if he’s that fast and that good and winning already, and now he’s telling them what he wants in the car. He’s maturing every week and can handle the pressure of making changes in practice, ‘this thing’s too tight, I need you to fix it. Maybe one or two works and David and Chris would figure it out and work on it. He’s still learning but to watch that maturity in one year, Todd’s so smart, so fast and so good at such a young age, it’s going to be fun to watch him grow.”