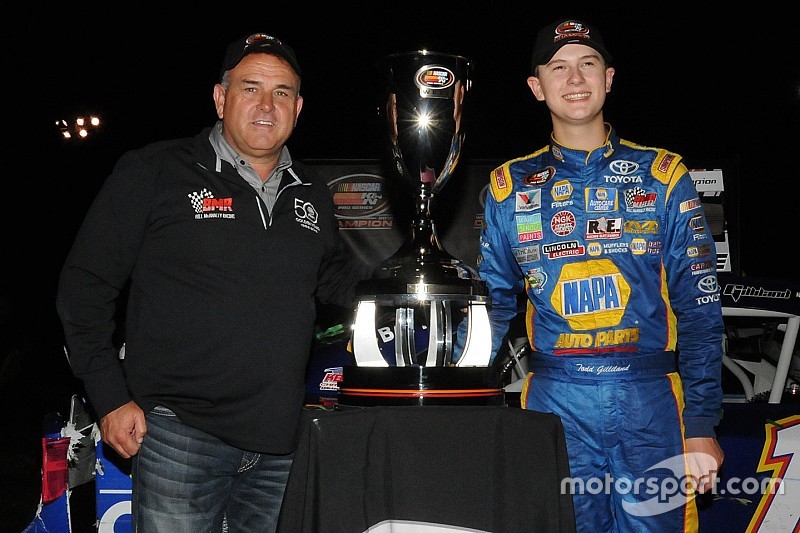 Successful team owner has seven championships and continues to help grow and improve NASCAR racing in the West.

Many former drivers stay in the sport in one form or another. From becoming a car owner, crew chief, driving coach or mentor, many find a way to remain because of their love of the sport and competition.

For NASCAR K&N Pro Series West team owner Bill McAnally, his passion and professionalism has allowed him to not only become a successful car owner, but he’s also helped keep stock car racing thriving on the West Coast.

McAnally grew up in Ukiah, Calif., and enjoyed working on cars. In high school, his shop class was given an opportunity by the local NAPA distributor to buy a tool a week and that was the start of a relationship for McAnally that has paid and continues to pay dividends over 30 years later.

McAnally’s racing career began after he moved to Roseville, near Sacramento, and got his first taste of competition.

“As a high school kid I would visit the local NAPA store and liked working on cars,” McAnally said. “We would also go and watch races and a friend of mine and I got a Bomber car and took turns driving it in races at All American Speedway.”

McAnally moved up to Street Stocks and later to Late Models in 1990 when he decided to visit a NAPA store and try and get some sponsorship for his car.

“I’ll never forget that first meeting and I asked for a NAPA sticker and that led to a meeting with a regional manager who oversaw 100 stores,” McAnally said. “We were lucky enough to win the championship that year and that started it all for me and my relationship with NAPA.”

McAnally moved up to the K&N Pro Series West which was then called the NASCAR Winston West Series and made 56 starts between 1992-1998, all the time while working as a lineman for an utility company.

McAnally had done about he could do while working a full-time job and trying to race and was about ready to put racing on the back burner when a chance meeting took place in 1999.

“I met with a father and son who wanted to go racing and I was about ready to retire and I told Gary Smith at a race at Auto Club Speedway that I was about ready to hang it up just before I met them,” McAnally said. “Sean (Woodside) and I got together in 1999 and we won the first race of the season in Tucson and went on to win my first championship as a car owner.”

This started a journey for McAnally and his longtime sponsor NAPA that continues to this day over 25 years later.

McAnally next opened a seat for Brendan Gaughan who went on to win back-to-back titles for Bill McAnally Racing in 2000 and 2001. McAnally would add a fourth and fifth titles with driver Eric Holmes in 2008 and 2010.

He became just the third car owner in the history of the series to win consecutive titles on two occasions after winning back-to-back crowns with Chris Eggleston and Todd Gilliland in 2015 and 2016.

“I’m been blessed to have a great group of people working on this team with talented young drivers and a passionate partner in NAPA and that’s who made it possible to win these titles,” McAnally said.

While ‘The King’ Richard Petty, Jimmie Johnson and the late Dale Earnhardt Sr. are well-known for winning seven NASCAR championships as drivers in the Cup Series, McAnally is the only owner in NASCAR history to have seven championships at the touring series level of NASCAR.

As if fielding championship caliber teams wasn’t enough, McAnally has taken his relationship with NAPA and NASCAR to a new level and helped promote K&N Pro Series West as the premier racing series on the West Coast.

“Throughout my driving career and as an owner I’ve worked with NAPA on the West Coast to help use my NASCAR team as a solid partner with them to help sell auto parts and increase their brand awareness,” added McAnally. “I saw an opportunity to help promote racing here and also help NAPA reach more customers and race fans.”

McAnally’s hard work has given him a 27-year relationship with NAPA in one of the longest team-sponsor relationships in NASCAR.

“I think Richard Petty and STP is the only partnership that was longer than ours is now and that was 29 years I believe they were on his cars,” McAnally added.

McAnally is off to another good start with his team in 2017 as his drivers – Gilliland and Eggleston - have won all six races held so far this season and sit first and second in the points, respectively.

“I’m so lucky to have the support of great people around me and I want to continue to make a difference in this great sport and continue to win races, championships and help NAPA continue to grow in the auto racing world.”

“When I went to college I worked three summers for the 49ers and my last season I got to chauffeur Joe Montana around on a golf cart during training camp,” McAnally said. “That’s a great memory and Joe even came to my 50th birthday party.”

He still tries to make it to as many games as he can in the Bay area and after his daughter attended the University of Alabama, he became a fan of that team.

Thank you to the fans

McAnally knows his driving days are behind him but also knows fans that follow his drivers and support his teams are vital and he wants to let them know it.

“When we go into a race market we do our best to make sure our drivers are available to meet the fans - that’s critical to our success on and off the track,” McAnally said. “Fans are what make this sport keep moving forward by supporting the drivers and our sponsors. I appreciate every one of them.”

He also wants fans to know what they’ve meant to him in his life.

Member of the following halls of fame: