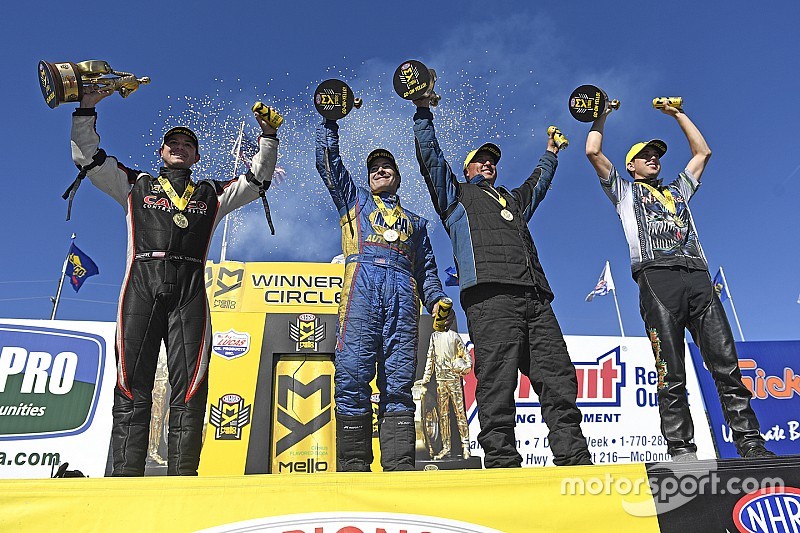 If anyone wasn’t exhausted after last weekend’s culmination of three consecutive NHRA Mello Yello Drag Racing Series contests, it was the three drivers and their respective teams that had the most success during the three-weekend period.

Drivers Steve Torrence, Ron Capps and Bo Butner are a triumvirate on a roll, with the kind of momentum most racers dream of attaining during a punishing 24-race NHRA season.

Torrence, who drives the Capo Contractors Top Fuel dragster for his eponymous team, made three final rounds in the races at Houston, Charlotte and Atlanta in three consecutive weeks. He won the latter two contests and elevated himself from fourth to third in points, the only driver other than Don Schumacher Racing’s Leah Pritchett to earn more than a single race victory this year. Pritchett has three wins; Torrence owns the two he earned on this latest three-race southeast swing, while DSR’s Tony Schumacher lies second and reigning champ Antron Brown is fourth.

Heading to Topeka, Kansas’ Heartland Park this coming week for the 29th annual race at that venue, Torrence has confidence to continue his march to the top of the dragster pile. “We’re going to try to continue to do what we’ve been doing at the same pace - and not slack off,” Torrence admitted. “If you get out of that routine and get into a different regimen, you may lose momentum, so we want to continue with that same intensity.”

After seven races Torrence acknowledged that the rail he’s driving this year, after making changes to the setup that have the car responding to his liking, “is the best race car I’ve ever had in my life.” There’s also been some continuity for the Texan and his team, with Richard Hogan cannily calling that shots on a daily basis and consultant Alan Johnson adding his own special information (Johnson’s Alan Johnson Performance Engineering supplies engines for Torrence’s dragster).

“We want to keep the pressure on everybody we’re racing, so they know they have to consistently run well,” Torrence said. The 10-time NHRA Top Fuel winner added, “When you get to that place where they know you’re going to run well, it forces them into mistakes. I feel like that’s where we’re at, and it’s something we’ve evolved into.”

Capps on the verge of four consecutive Funny Car trophies

For reigning first-time Funny Car champion Ron Capps, a run of three consecutive victories in this southeastern swing has been just what the doctor ordered after a slower-than-usual start to the season. “It’s a pinch-me moment,” Capps said after lifting his third straight Wally. “The car speaks for itself lately.” After navigating the bumps of the Commerce, GA track outside Atlanta, the champ claimed his 53rd NHRA title (one win in Top Fuel during his rookie, 1995 season) and 52nd in Funny Car.

“Rahn Tobler and Eric Lane are the dynamic duo,” Capps says of his two tuners. “It’s so fun to watch the approach that they have in the lounge of the trailer and to think about what’s going to happen next, what the track’s doing… and I’m able to sit in there, put my fire suit on and listen to what they’re doing. I sort of know what the car is going to do because of what they’re saying,” he said.

While Capps’ team has qualified in the top six in each of the seven races held to date, he wasn’t able to put together the kind of magic that helped the Californian earn his first-ever Funny Car title late last year after several second-place results. He was consistent through the initial four contests but never found his way to the Winner’s Circle until the fifth race in Houston. From then on, he’s been a streak of blue and yellow to the finish line. Capps has not stood lower than fourth in the standings since the season began at Pomona in mid-February.

Butner charges up the standings

One of the hottest Pro Stock cars in the paddock over the past season and a half has been the Chevrolet Camaro of Bo Butner, whose chassis and engine have the tuning expertise of KB Racing/Summit Racing, home to multiple champions Greg Anderson and current titleholder Jason Line. The sportsman ace has been close to the winner’s circle - close enough to smell the sprayed Mello Yello on many an occasion - but it wasn’t until the Houston race that Butner fulfilled the destiny of victory. Butner won a second time two weeks later in Atlanta, defeating two-time champ Erica Enders in the finals.

Thanks to those two victories, Butner leapfrogged teammate Line to stand second in the points race; the team has the first three positions in the factory hot rod class, with Anderson, Butner and Line. Butner continued Summit Racing’s streak of having an entry in the finals of each race thus far in the season; the team has won four of seven contests and Butner is the only Pro Stock driver to win more than a single race thus far this year.

“We’ve had the car to win for probably a year and a half and now it’s all coming together,” Butner said. The Indiana born racer has reached seven Pro Stock final rounds since joining the category at Atlanta in 2015. “I told the guys that there was no way in the world I could go another 40-something races and not win one of these things. I’m doing my job, but you have to be in the right place at the right time. I’m happy in this car; I’m happy with our team. You have to have a lot of trust in the car and I definitely do.”

Will the week of no professional racing stop the momentum of these three soaring drivers or can they continue to rampage through their classes? Much will depend on Topeka’s weather which, as happened in Atlanta, calls for wet grounds on Friday that could easily scotch the two qualifying sessions. That didn’t seem to bother Torrence, Capps or Butner in Atlanta. Doubt it would here, either.