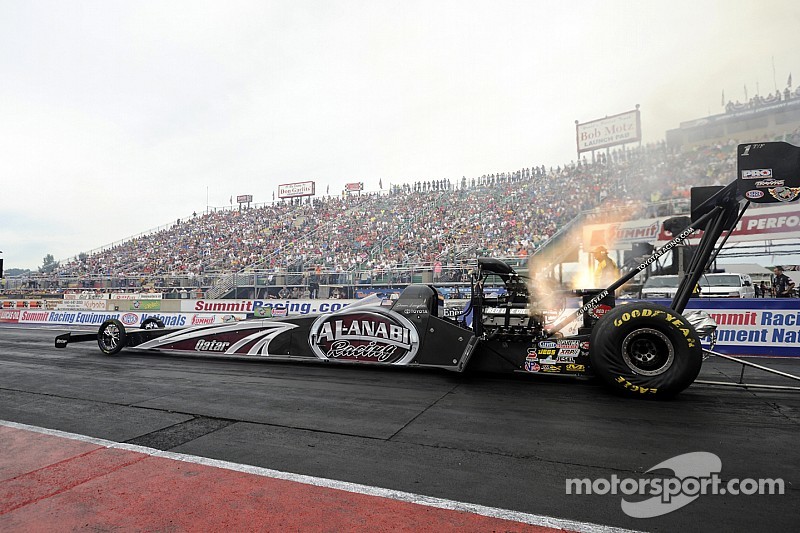 After learning that their six-year relationship with Al-Anabi Racing was done at the end of 2014, it wasn’t known whether Alan Johnson Racing (which ran the team for Sheikh Khalid bin Hamad Al Thani) would make the bell for this year’s 55th annual Circle K Winternationals on the Auto Club Raceway at Pomona drag strip.

That question was answered by Alan Johnson Racing (AJR), which stated that the team, together with 2013 Top Fuel champion Shawn Langdon intend to open their season the weekend of February 6-8. Former teammate Khalid alBalooshi has separated from the team.

With two championship tuners on hand to work magic together, AJR looks to have a potent crew available to work with Langdon. Longtime AJR championship-winning crew chiefs Brian Husen and Jason McCulloch will serve as co-crew chiefs on Langdon’s rail.

“We enjoyed our six years with Al-Anabi Racing and experienced great success,” said Alan Johnson, team owner. “We appreciated the opportunity to compete for Al-Anabi Racing and thank Sheikh Khalid for everything he did for us. We had a great run, but now we must move on and focus on the future.

“We are going to Pomona with every intention of winning the Winternationals; we are in discussions with multiple entities about sponsoring our race team and part of that process is showing the level of excellence at which our team competes,” Johnson stated. “We won the Winternationals last year (with alBalooshi) and our goal is to repeat as Winternationals champions next weekend.”

With this announcement the field of Top Fuel dragsters is looking better than it had at the start of the calendar year.

The loss of alBalooshi, who won four races over his NHRA career with AJR and appeared in NHRA’s Countdown to the Championship the past two seasons with ever-improving results in his four-year stay with the Al-Anabi Racing Top Fuel team, will be felt but it’s conceivable that the team may add another driver should financial backing be secured.

Langdon and alBalooshi joined Al-Anabi Racing in 2012 following the two Top Fuel championships earned by Dixon (his third) and Worsham, who had been a standout Funny Car driver and remains so today. Dixon is now driving for Bob Vandergriff Racing alongside Dave Connolly, who has moved from Pro Stock to the nitro ranks and Worsham is back in Funny Car with Kalitta Motorsports.

When the single-car entry for Pomona was announced, no mention was made of livery for the dragster. We’ll have to wait until it shows up at the track to see how it looks - another good reason to come to Pomona for the 55th annual Circle K NHRA Winternationals the first weekend of February.