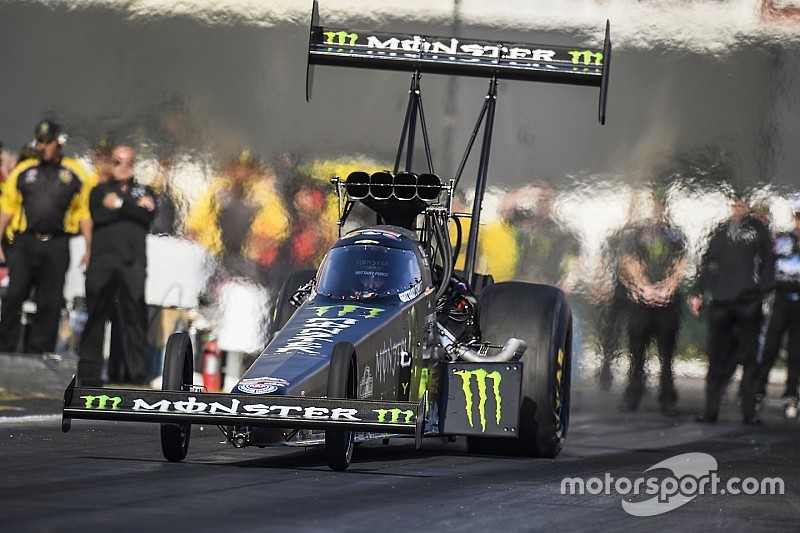 Brittany Force became the first female Top Fuel champion since Shirley Muldowney clinched the honor 35 years ago – and Force did it in style with her fourth victory of the season. Crucially, it was her third win in the six-race Countdown to the Championship, following the points reset.

After qualifying No. 1, Force’s title was earned in the quarterfinals, when her Monster Energy dragster defeated Richie Crampton with a 3.679sec pass at 328.22mph. When (fittingly) outgoing and three-time champion Antron Brown defeated points leader Steve Torrence in his quarterfinal, the crown passed to Force. She went on to (even more fittingly) beat Brown’s Don Schumacher Racing dragster in the semis, and then clinch her fourth win by outrunning Shawn Langdon with a 330.07mph pass as he smoked the tires and trailed in at 89mph.

Force, daughter of 16-time Funny Car world champion John Force, declared: “I can’t believe we are here, it seems like a dream. The reason we are here is because of that Monster team and all the support I have and all the sponsors.

“We struggled, we had our ups and downs, but we pulled it together when it mattered most. I give all of it up to my crew chiefs, Alan Johnson and Brian Husen, they are the ones that made this possible. They always had my back and they kept pushing me, they never gave up on me – pushing and fighting and never gave up.

“I can’t believe we are here. I have to thank my dad, my family, they always had my back no matter what. This is a very proud moment. It is the support system you have around you – that is why we are here.”

Despite eight wins this year, Torrence had to be content with runner-up at season’s end ahead of Doug Kalitta, Brown and Leah Pritchett.

Hight, who won four times this year, went all the way to the final round today but a smoky run handed the event win to Tommy Johnson Jr., who scored his second victory of the season and his first since April, in the Make-A-Wish Dodge Charger R/T.

Said Hight: “Everybody worked their tail off … This is just huge for John Force Racing. For a couple of years, we have struggled but it is such a great group. We signed a long-term deal with Auto Club and they deserved better than what we were giving them. Jimmy Prock, Chris Cunningham (co-crew chiefs) – they got us back in the game.

“It's pretty cool; it's been 10 years since Chevrolet has won a championship in Funny Car and we're back. To qualify No. 15 and race a tough competitor like Tim Wilkerson with a lot of pressure on us in the first round, it's awesome how it shook out. (Crew chief) Jimmy Prock kept telling me, 'We're only an adjustment away from getting this thing down there,’ and, boy, it was fast.”

Hight, who this year set the Funny Car national elapsed-time record (3.793sec) and national speed record (339.87mph) also paid tribute to the outgoing champ and his chief rival, stating: “Ron Capps has been a great champion and has had a great season, and that is a great team. They battled all year.”

Butner, like Brittany Force, claimed his first NHRA Mello Yello Drag Racing Series championship by winning the event. Butner’s first hammer blow to his rivals was defeating teammate Greg Anderson in the semifinals with a 6.551sec pass at 210.05mph. Still Anderson had a chance of the title having arrived in Pomona with a 40-point lead over Butner.

However, the Jim Butner Auto Chevrolet Camaro’s victory over Tanner Gray in the final, a 6.653sec run at 208.62mph, brought title glory to the Butner who only earned his first win at Houston in April this year. His championship run was largely down to his extraordinary consistency, with five wins and six runner-up finishes.

“I have a great crew,” Butner said afterward. “They don’t give up on me. But the KB team, what does that say about them? Honestly, I rent a car and a motor and they put me in a championship [position]. It’s just unbelievable. Thank the Lord for everything; He shined on me.”

There were major celebrations at the Screamin’ Eagle Vance & Hines Harley Davidson team on Sunday as Andrew Hines took the event win over newly-crowned teammate Eddie Krawiec. Hines won with a 6.856sec pass at 196.02mph to make it 14 consecutive years in which he has scored at least one win, and his win elevated him to second in the points.

“It was a long season for my side of the team, but we found a way to get better throughout the season to get back to the level we expect ourselves to perform at,” Hines said. “There were plenty of long hours from the Vance & Hines team this year, and it’s really special to have a team of guys like I do that make sure we’re heading down the right path as we continue to push forward going into next year.”

Krawiec, who scored seven wins this year, stated: ““I have to give this to teamwork,” Krawiec said. “All the guys who stand behind me when I’m on my motorcycle and make it go up and down the dragstrip as fast as it does… I just couldn’t do it without my team.”

NHRA champs reflect on the 2017 season