Beckman looking for rebound in Phoenix 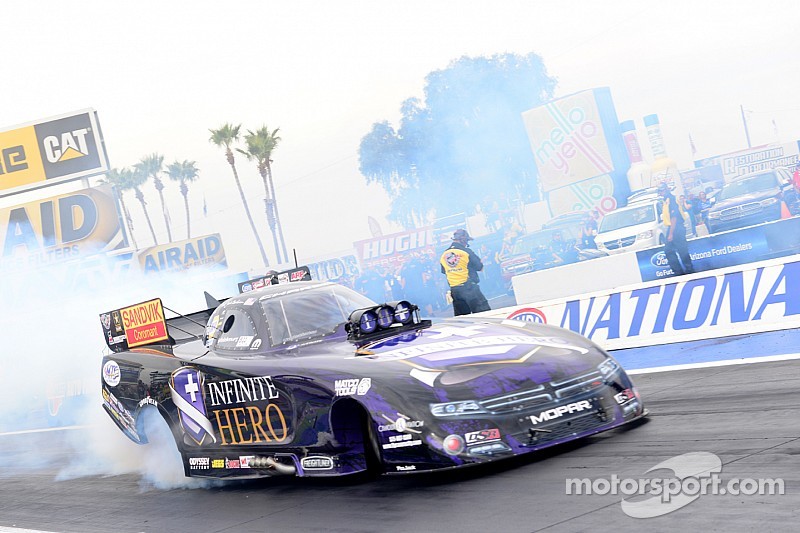 Beckman, the category’s 2012 champion has fought hard for everything he’s got. He’s a military veteran (and his sponsorship, courtesy of Terry Chandler’s largesse is a perfect fit) and a testicular cancer survivor with two beautiful children he was told he’d never be able to conceive with wife Jenna. Plus, Beckman gets to work a job most people would kill to be able to do - drive a 10,000-horsepower NHRA Funny Car and compete for NHRA championships.

But this year - so far - has been a tough one for Jack Beckman. Gifted with the talents of three exemplary tuners before the season began - his Christmas came early, Beckman said - in champion tuners Jimmy Prock and John Medlen, together with Chris Cunningham, Beckman has yet to make it down a 1,000-foot drag strip during competition. He’s tested with great times since pre-season work began and everything has gone well - until it’s time to go racing in earnest.

If it weren’t so sick it would be funny. Parts failures, track difficulties and unexpected mechanical problems with a brand new 2015 Dodge Charger R/T, which is the same as teammates’ Matt Hagan, Ron Capps and Tommy Johnson. Shouldn’t all these problems be spread out over a team, rather than lumped into one undeserving guy’s lap.

It’s hard to maintain a positive attitude when you can’t compete, but Jack Beckman manages to set aside his professional difficulties and be kind and generous with his time for the fans here at Wild Horse Pass Motorsports Park, where he tested right after failing to qualify for the season-starting Winternationals in Pomona.

It’s 10,000-horsepower cars and anytime you pour nitro in the tank all bets are off.

In testing here after Pomona, he had nothing but good times, despite shutting off just past half-track in those tests. His Dodge produced times that would have easily placed him in the top half of the field for P

omona and easily in the field after the first two qualifying sessions Friday here in Phoenix.

But Jack Beckman’s car won’t budge when it’s money time, it appears. His first try produced a 10+ second run with tire smoke billowing over the race track and behind him. His nighttime pass wasn’t any better. So Saturday’s two qualifying sessions - no chance of rain here in the Valley of the Sun - is crunch time for Jack Beckman. Will heads roll if he doesn’t produce a good qualifying time today?

That’s up to team owner Don Schumacher, of course.

it’s what keeps them coming back for more. They are amongst the best in the business: Jack Beckman, Jimmy Prock, John Medlen, Chris Cunningham and their tight group of crew members.

“It’s 10,000-horsepower cars and anytime you pour nitro in the tank all bets are off,” Beckman said. “You just have to look at track records. Jimmy Prock has proven over decades that he will put the fastest car around his drivers and he will always get race wins and challenge for a championship.”

But it is crunch time. Can they make it happen today and make the field of 16 for Sunday’s eliminations? It’s more drama than anyone should have to put up with.

Schumacher, Hagan and Enders-Stevens race to No. 1 qualifying positions at Phoenix

Hagan, Schumacher and Brogdon race to victories in Phoenix