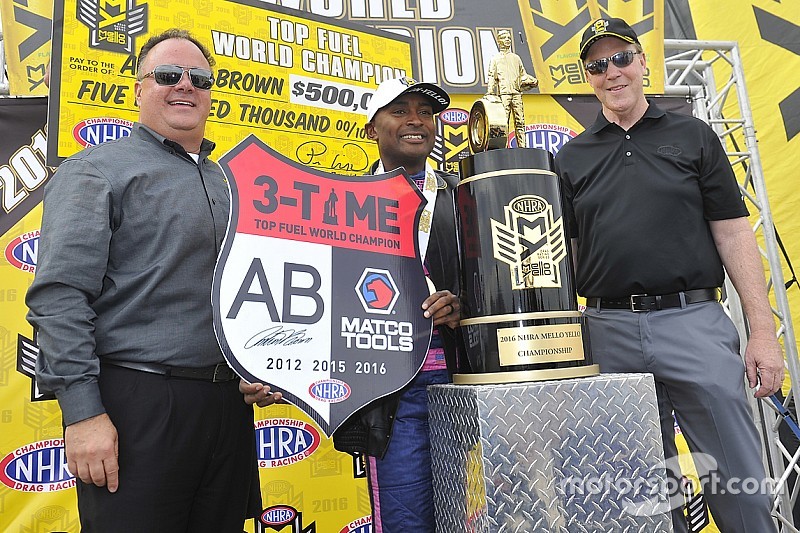 By defeating Wayne Newby in the quarterfinals, Brown outlasted his two closest chasers Top Fuel title challengers to secure the season crown. Doug Kalitta lost in the quarterfinal round to Steve Torrence – who went on to win today’s Toyota Nationals in at the Las Vegas Strip – and Shawn Langdon fell in the first round to J.R. Todd.

It is Brown’s second consecutive championship, and the second time in a row that he’s clinched the Mello Yello Series title in the penultimate round. It is the first time in seven years that a Top Fuel champion has won back-to-back titles.

“Brian [Corradi] and Mark [Oswald] and our entire team has worked so hard and I’m just privileged to drive that racecar for Don Schumacher Racing because Don makes it all happen,” said the elated Brown. “When you come to a sport with all this access it makes dreams like mine, a kid from New Jersey, come true. My dad, uncle, everybody… they instilled it in me at a young age – work hard and you can make great things happen.”

Brown has scored seven wins this year, but was beaten in the semi-finals by Todd, who met Torrence in the Finals. That victory went Torrence’s way, after his Capco Contractors dragster made a 3.734sec pass at 323.81mph to defeat Todd’s 3.762 at 321.96. It was Torrence’s third win of the season, eighth of his career and first in Vegas.

John Force powered his Peak Antifreeze Chevy Camaro to a 3.884 second pass at 327.19 mph to defeat daughter, Courtney Force who raced a 3.906 at 325.85 in her Traxxas Chevy Camaro. It is Force Sr.’s 147th career victory, fourth of the season and sixth in Vegas.

“I’m really excited,” said the 16-time world champion. “We got two wins in the Countdown just a little bit late. It’s pretty exciting when I see the stands packed. The way NHRA and the way our TV deal has really been hopping, sold out crowds, and so many things going on. To be a part of it still at my age is really awesome.”

It was the fifth time father and daughter had faced each other in a race finals, the most recent was in Denver, where John also won. John defeated John Bojec, Chad Head, and Matt Hagan in the earlier round for the win. With the semifinal finish, Hagan moves to second in the points standings, 86 behind Ron Capps who fell to Courtney in the semifinals.

Shane Gray raced his Gray Motorsports Chevy Camaro to a 6.719 pass at 204.76 to defeat teammate Drew Skillman for his first win of the season, fifth of his career and first at The Strip.

“It was a really good weekend for me,” said Gray. “I think I’ve been in nine semis this year but I haven’t won since U.S. Nationals in 2014. It was a great day. I’ve got one more race to run and then my son is getting in the car so I can’t think of a better time to win. Awesome day."

The win moves him into third in points. Jason Line and Anderson remain in the first and second spots, respectively, after they both fell in the semifinals.

Jerry Savoie rode his Savoie’s Alligator Farm Suzuki to a 6.915 at 194.13 to defeat Andrew Hines in the Pro Stock Motorcycle final round for his second win of the season and sixth of his career.

“To do what we did here, we been working hard,” Savoie said. “Tim [Kulungian, crew chief] went back to the shop and looked at a bunch of notes, and got on a dyno and an engine we had back home and did some work. The harder you work, the better you get. It all came together this weekend. No. 1 qualifier every round, and we got a fast motorcycle. It’s going to be very, very interesting when we get to Pomona.”

Savoie defeated Scott Pollacheck, LE Tonglet, and Matt Smith in the early rounds and is now just three points behind Harley-Davidson teammates Hines and Eddie Krawiec who are tied for the points lead.

Joy and drama in Sin City