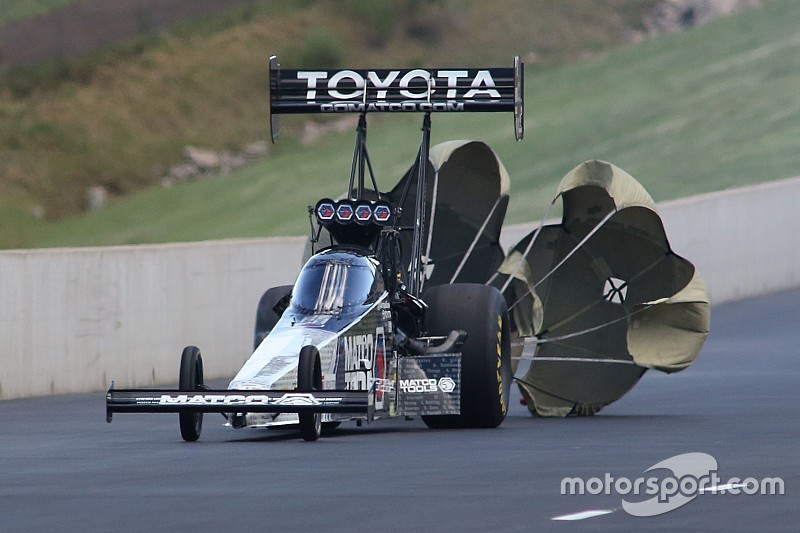 Meanwhile in Pro Stock at zMAX Dragway, NHRA’s strong competitor diversity also was showcased in impressive fashion by Erica Enders, who scored her third consecutive victory, seventh of the season and 19th of her career to pass NHRA legend Shirley Muldowney on NHRA’s all-time wins list.

Brown scored his fifth victory of the season and 36th of his career in Top Fuel and took over the points lead as he works toward a second series title. Brown left the starting line first and sped to a performance of 3.832 seconds at 311.56 mph in his Matco Tools dragster to finish in front of Todd, whose Jimi Hendrix Foundation dragster trailed with a 4.063 at 286.32.

In 2006, Todd became the first African-American to win a race in the Mello Yello Series and in 2012 Brown became the first black driver to win an NHRA world championship title, the first in a major U.S. auto racing series. Today, they met for the first time in a final round race.

“It’s pretty awesome when you look at that,” Brown said. “J.R. has been racing longer in Top Fuel than I have. You never think about things like that. We’ve always talked about (racing each other) it in the final one day. We both threw down on the tree and it was a great race. It just shows you what this NHRA sport is about. When I was a kid I got to come to this sport and was able to see guys like Big Daddy (Don Garlits) and Kenny Bernstein. It gave me that ray of hope because I could see what they’re doing because of all the access this sport offers. To be here racing in this sport so long, it is just a dream.”

Brown raced past Terry McMillen, Steve Torrence and Tony Schumacher to reach the final round. Even though he qualified sixth he put together a string mid-3.80 second runs and had the most consistently quick dragster of the day.

“When you come here, this is one of the racing capitals of the world right here in Charlotte,” Brown said. “This track is a stadium. It reminds me of one of those old, old coliseums, like this is where all the people gather to wait for the battle to go down, like the gladiators.”

He said his semifinal round victory over playoff top seed Schumacher was massive in the grand scheme of the Countdown, and a huge motivational win for his team.

“Once we got to the semifinals here today, we were like, ‘All right, we’ve got to go up against ‘The Sarge,’ our teammate whose a tough competitor,’” Brown said. “We’ve been battling back and forth all year long. The thing about it was if he took us out and he won the race, it would be a 70-point swing, so that was the crucial round for us right there to keep the points close so we could stay in the battle with him.”

In Pro Stock, Enders used a quicker reaction time to defeat the faster car of Vincent Nobile in the final round and took a commanding lead in the Pro Stock points standings as she eyes a second consecutive world championship crown. She also tied female wins leader Angelle Sampey’s record for most wins by a female driver in a single season.

While she has won the last three races relying on her quick reflexes and quicker reaction times at the starting line to get past many rounds, Enders is quick to give most of the credit to her Elite Motorsports Chevy Camaro crew, led by crew chiefs Rick and Rickie Jones and team owner Richard Freeman.

“This is pretty incredible; it’s pretty surreal,” said Enders, who defeated V. Gaines, Chris McGaha and Allen Johnson in the first three rounds. “I feel like I’m in a dream. I don’t know what I’ve done to deserve such a great group of guys. We have fun racing together. When I get in that car and close the door, there is not one single doubt that the car is prepared as well as it can be. It’s just up to me to drive it right.”

Del Worsham (Funny Car) and Andrew Hines (Pro Stock Motorcycle) also were winners at the first of six playoff races in the NHRA Mello Yello Countdown to the Championship.

In Funny Car, Del Worsham earned his first victory of the season and 27th of his career and vaulted into the points lead by outrunning event top qualifier Tommy Johnson Jr. in the final round. Worsham powered his DHL Toyota Camry to a 4.086 at 307.16 to finish in front of Johnson’s Make-A-Wish Dodge Charger, which posted a 4.119 at 300.93.

“Funny Car is extremely competitive right now,” said Worsham, who also won at zMAX in Top Fuel during his 2011 world championship season. “With what the DSR cars have been doing, especially Jimmy Prock and Jack Beckman, leaving Sonoma I was thinking, ‘What are we going to do?’ We’ve made some changes, weren’t complacent and the team has worked hard and we pulled it off. [Team owner] Connie Kalitta has given us the best parts. These are the races we are going to need to win if we’re going to win the championship.”

Worsham entered the playoffs as the fourth seed, but his team’s consistency in the regular season – even though they didn’t earn a victory – was largely overshadowed by the stellar performances of the DSR cars of Jack Beckman, Johnson Jr. and Matt Hagan. He feels his team is ready to make a run for the championship, which if he were successful he would join Kenny Bernstein and Gary Scelzi in a very exclusive club as owners of series titles in both nitro classes.

“I just want to be at Pomona and be in position to be the Funny Car champion,” Worsham said. “I know there’s only a short list of people who have pulled it off. I don’t want to get that far ahead right now. We’re looking forward to St. Louis.”

In Pro Stock Motorcycle, defending world champ Hines won this event for the third time, clocking a winning run of 6.880 at 195.11 on his Screamin’ Eagle Vance & Hines Harley-Davidson to Smith’s losing 6.910 at 192.49 on his Victory Racing Gunner. It was Hines’ 40th career victory in the two-wheel category.

"I won here in the spring at the Four Wide and that was my 39th win and it has taken us all this time go get back and get win No. 40," Hines said. "That tells you how tough it is out here."

Hines outran Chaz Kennedy, veteran rider Steve Johnson and top qualifier Jerry Savoie to advance to the final and get a great start on defending his series crown. He moved into the points lead with the win, and is 20 points head of playoff top seed and teammate Eddie Krawiec heading to round two of the playoffs.

"I’m not quite certain why, but zMax Dragway has been kind to me,” Hines said. “The first three or four times here I never got past the first round. My Harley V-Rod was running straight and true and putting up big speeds and it has done it consistently. We’ve had to figure out how to get a win on a tricky track but everything played out in our favor. We took a chance and changed a bunch of parts on our engine at mid-season looking for more power and consistency and it paid off.”

The NHRA Mello Yello Countdown to the Championship continues next weekend with round two of the playoffs at the AAA Insurance NHRA Midwest Nationals at Gateway Motorsports Park near St. Louis.

Sunday's final results from the Eighth annual NHRA Carolina Nationals at zMax Dragway. The race is the first of six playoff races in the Mello Yello Countdown to the Championship and the 19th of 24 in the NHRA Mello Yello Drag Racing Series:

Millican, Johnson Jr., Anderson and Krawiec are No. 1 qualifiers at Zmax Dragway