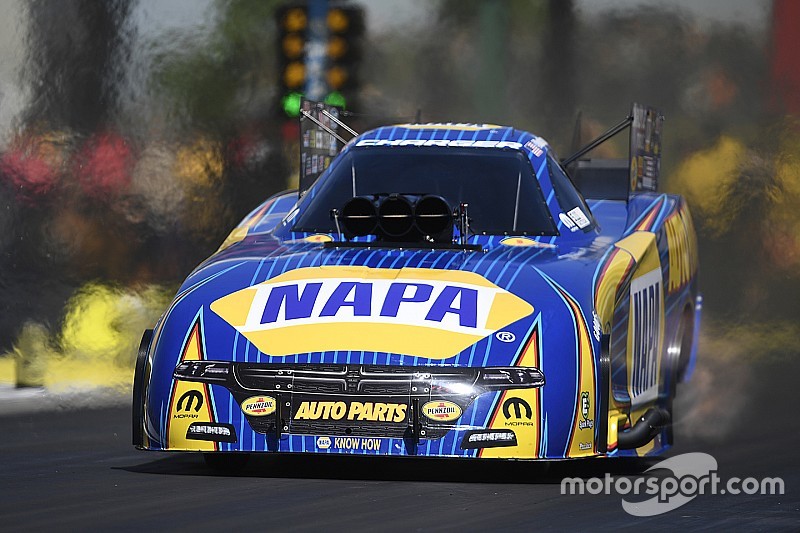 Capps, the reigning, first-time Funny Car titleholder has won the last four 2017 events held by the series and is looking for his fifth consecutive Wally trophy at the New England dragstrip. This race marks the return of Alexis DeJoria to competition after a month-long time-out to tend to family matters.

The weekend begins a grueling four-races-in-four-weeks challenge for the drivers and crews in NHRA as they traverse the East Coast. The New England Nationals are also the midway mark in NHRA’s “regular” season that ends with the vaunted Chevrolet Performance U.S. Nationals on Labor Day weekend. These four contests will definitely separate those that are prepared from those that aren’t, before July sets in.

For Capps, this is an opportunity to advance his desire for a second straight championship after being a bridesmaid for much of his 20-year NHRA Funny Car career. The Californian, and his Don Schumacher Racing Rahn Tobler and Eric Lane-led squad have had their Dodge Charger R/T in excellent form, despite not making many changes from last year to this. Maybe that’s the answer? The yellow-and-blue crew have found their sweet spot and are massaging the car to victory with an ease that belies the amount of work necessary to be victorious.

The last time this team lost in an opening round of eliminations was at the Las Vegas Nationals the first weekend of April. Since that time, they’ve been unstoppable. Capps has earned 15 consecutive round wins during this surge; the last time a pro driver did that was in 2013, when 16-time Funny Car champ John Force ran the table.

Although his DSR teammate Matt Hagan, currently 119 points behind Capps, set the national Funny Car class record at 338+ MPH) during the most recent race at Topeka, “We couldn’t go toe to toe with those guys in qualifying, but no one is better than Rahn Tobler on race days. Those speeds are great,” Capps allows,” they’re great for headlines - but championships are won by E.T.s and especially race wins.”

Capps is looking for his third Epping victory, having claimed the Wally in the second year of competition, 2014 and in last year’s rain-delayed race. He’ll have to contend with a strong John Force Racing Chevrolet Camaro SS squadron that won the initial contest in 2013 (Courtney Force) and two years later, when patriarch John Force went to Victory Lane. He’ll also have to watch out for the very quick and consistent Tim Wilkerson’s Ford Shelby Mustang and the improving Kalitta Motorsports Toyota Camry of JR Todd (currently 8th), together with his returning teammate DeJoria, hungry to return to competition and languishing in 14th place in the standings.

In Top Fuel, the golden DSR dragster of Leah Pritchett, owner of three wins and the points lead over two-time winner Steve Torrence (-30) and ever-consistent three-time reigning champ Antron Brown (-41 points), looks to maintain her hold on first place. This week and next (at Englishtown, New Jersey) she honors Mopar’s 2018 Dodge Challenger SRT Demon, the 840-horsepower street car. Pritchett’s 11,000-HP rocket ship laughs at the Demon but she won’t, having assisted in the street machine’s development.

Although he claims 24 different at-track victories, five-time Pro Stock champion Jeg Coughlin Jr hasn’t been able to hoist a Wally at Epping over the past four years. He’s aiming to change that this weekend in his Chevrolet Camaro door-slammer. Coughlin will have to figure out how to beat Greg Anderson, who has won this event the past two years. Two-time winner Bo Butner has the points lead over Anderson (-26), and rookie Tanner Gray (who has two victories), currently leads Coughlin in third place. Since his Elite Motorsports team returned to the Chevy camp this year, both Coughlin and teammate Erica Enders-Stevens, a two-time Pro Stock champion, have shown the kind of excellence that helped both achieve their titles.

As usual, the weather in the northeast is “iffy” for the weekend, with only 20% chances of rain for qualifying days, Friday and Saturday, but a 50% chance of rain on Sunday - and even more on Monday. In any case, the weather will be cool, under 70 degrees which should make for quick times in time trials and eliminations.