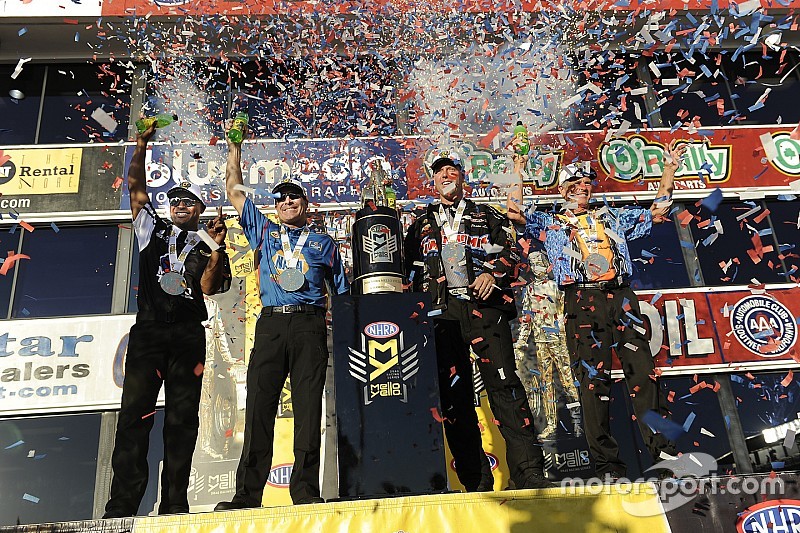 Ron Capps clinched his first NHRA Mello Yello Drag Racing Series world championship on Saturday. The driver of the NAPA Auto Parts Dodge Charger R/T, had a 92-point lead over second-place Matt Hagan when qualifying concluded and needed an 81-point lead to clinch. Before being crowned, Capps was the winningest driver, with 50 victories, to have not won a championship.

“I can’t even tell you how focused [crew chief] Rahn Tobler has been this year,” said Capps, who was the series runner-up in 1998, 2000, ’05 and ’12. “I almost gave up the chance of trying so hard and wishing so hard and just focused on winning races. With all the accolades I got this year – my 50th career win, passing some people I really looked up to in the sport with wins – that’s mind-boggling for me.

“This was the toughest Funny Car class ever and the 50th anniversary of the Funny Car, which was awesome. What a great, great season.”

Johnson notched a 3.918 at 320.51 in his Make-A-Wish Foundation Dodge Charger R/T to outlast John Force’s 3.918 at 321.81 on a holeshot in his Peak Antifreeze Chevy Camaro in the final. Johnson tallied his third win of the season and 15th of his career. Johnson, who posted a runner-up at this event one year ago, finished a career-high second in points. He beat Dave Richards, Robert Hight and Courtney Force in the earlier rounds.

Kalitta powered to a holeshot victory with a 3.745-second pass at 326.63 mph in his Mac Tools dragster to defeat J.R. Todd’s 3.704 at 327.90 in his SealMaster dragster in the Top Fuel final. Kalitta claimed his fourth victory of the season and 42nd of his career. He sprinted past Shawn Reed, eight-time world champ Tony Schumacher and Shawn Langdon in the earlier rounds. The win moved him to second in points, where he will finish for the fourth time in his career.

“I’ve been trying to win this last race for a long time,” said Kalitta, nephew of drag racing legend Connie Kalitta. “The history here, for me, growing up watching Connie race over the years and to be able to win today was huge for me and for everybody on the team. It was very cool that [J.R. Todd] and I were both in the final and got to run for the money there. It will be good momentum for all of our teams and we finished off the season with some good runs.”

Todd, appearing in a career-high sixth final round, knocked down Troy Buff, Richie Crampton and world champion Antron Brown en route to the final round.

Line clinched his third Pro Stock world championship after he raced to victory in his Summit Racing Equipment Chevy Camaro in the semifinal round, putting the points out of reach for second-place teammate Greg Anderson.

“It’s been a great year and thanks to all of our competitors; they kept us honest and made us work hard right to the end,” said Line, who also won the title in 2006 and 2011. “I have to thank all the Summit guys, Ken Black, and all of them. It has been an incredible season and I can’t believe I didn’t actually mess it up.  It is such an honor to be up here.

“We have had a great car all year. Greg [Anderson] and I have had probably the two best cars all year. If it had ended any other way, I would have been disappointed.”

Anderson may have lost the war, but won the weekend’s battle by beating Line on a holeshot in the Pro Stock final round by powering to a 6.580 at 210.24, bettering Line’s 6.570 at 211.43. This is Anderson’s eighth win of the season, 86th of his career and sixth at the Auto Club NHRA Finals. He finished the season second in points.

In Pro Stock Motorcycle, Savoie earned his first career world championship after he advanced to the semifinals while his nearest contenders, Eddie Krawiec and Andrew Hines, were knocked out in the quarterfinals. Savoie, rider of the White Alligator Racing Suzuki, never led the points standings until he secured the title.

“To only dream of winning one race and to come out here and put a deal together with the support of Vance & Hines and my crew and to win the championship is amazing,” said Savoie, who won two races and notched four runner-ups. “I went to church this morning and the word was encouragement and to get encouraged from the people who inspire you. I want to thank everybody, especially the fans. Without these guys, this would not be possible; you make our dreams come true, and those guys are my family.”

However, the final of Pomona’s race saw Matt Smith take victory with only a 8.044sec/117.34mph pass on his Victory Gunner to beat Angelle Sampey, who left the line early to red-light on her Buell. Smith claimed his first win since 2013 with the performance, took sixth in the standings and gave the Victory marque its first win.

Pomona delivers in memories and milestones