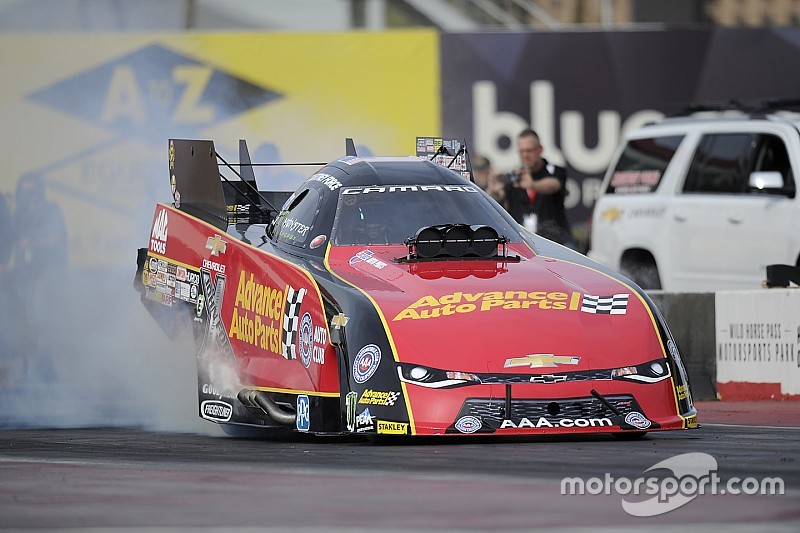 Pritchett had the unofficial quickest run in NHRA history in her Don Schumacher Racing dragster Saturday morning, laying a 3.654-second pass at 331.85 mph, during their first try of the day after they ran the two quickest passes Friday with a 3.677 and a 3.685.

“I have to be totally honest, we didn’t come out here to be the quickest,” said Pritchett, who won her first Top Fuel event at the same venue in 2016. “That wasn’t the goal. The goal was to get the power that we created in the offseason to the track.

“We exceeded our expectations… For it to blast off at .65 on a warmer day today, man I’m stoked for (my team), that’s a lot of hard work and they just put it on the track.”

With a track temp of 104 degrees on Saturday afternoon, Pritchett ran a 3.697 at 327.51 to give her ownership to four of the top five times of the weekend.

Steve Torrence, who holds the official Top Fuel ET national record at 3.671, had the second quickest machine when he ran a 3.691 on Friday. Brittany Force, piloting John Force Racing’s only TF entry, had the third quickest with a 3.695 narrowly out running Doug Kalitta, who finished second in the points standings in 2016, while defending TF champion Antron Brown was fifth.

Rookie Troy Coughlin Jr., who will be racing a full season for Kalitta Motorsports, closed out testing with his best run of the weekend posting a 3.763 at 317.42.

Courtney Force was fastest in Funny Car, and like Pritchett, she set an unofficial record with a 3.804s at 333.33mph in her Chevrolet Camaro SS.

“It was a pretty unbelievable run,” Force said. “It’s all thanks to my crew; I’m just the one piloting the car down to the other end. But it was really exciting hearing them come on the radio and be so excited about it.

“I feel like I had my hands full on multiple runs, but it’s really great being able to make so many great passes just in testing – the 3.84s and then the 3.80 unofficially. It’s a great feeling. I’m proud of my guys; it’s all because of them.”

Defending Funny Car champion Ron Capps’ Dodge Charger R/T was the second quickest Funny Car with a 3.854 pass on Friday while 16-time FC champ John Force nailed a 3.856 in his Camaro to take the third spot from teammate Robert Hight.

Capps ready for title defense in 2017

NHRA season kicks off with the 58th annual Winternationals