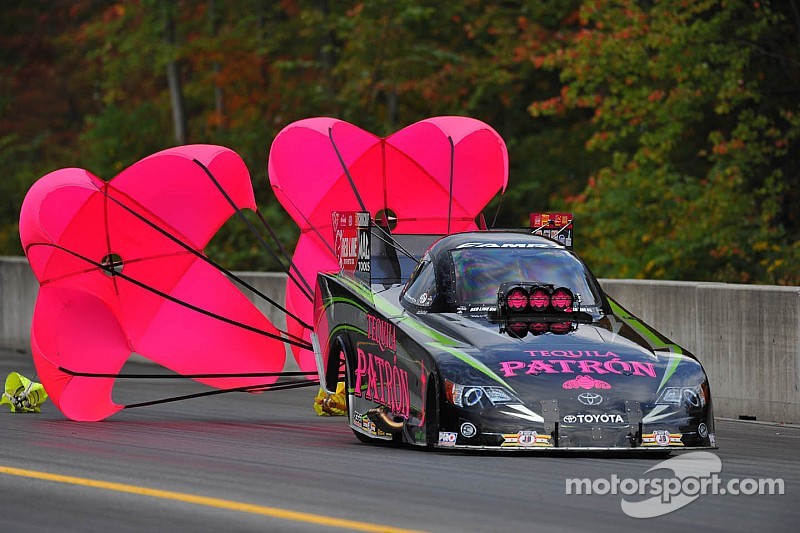 Alexis Dejoria takes out John Force for the biggest win of her career.

DeJoria (in photo) crossed the finish line in 4.038 seconds at 310.34 mph in the Patron XO Cafe Toyota Camry to defeat the current Funny Car points leader, who won the Traxxas Nitro Shootout Sunday. It was the third win of DeJoria’s season and her first at Lucas Oil Raceway at Indianapolis. With the victory, DeJoria became the fourth female winner of the Chevrolet Performance U.S. Nationals and the first female driver to win three Funny Car races in a single season.

“It’s huge [to win the Chevrolet Performance U.S. Nationals],” said DeJoria, wife of noted TV personality Jesse James and daughter of famed entrepreneur John Paul DeJoria. “I was just happy to make it to another semifinal; that was four in a row. To make it past the semifinals, that was huge, but to win this race just builds our confidence even more and in me especially.”

DeJoria will be the fourth seed in Funny Car when the Mello Yello Countdown to the Championship playoffs begins at the NHRA Carolina Nationals in two weeks.

Force was appearing in his sixth consecutive final and ran a 4.039 at 319.67 in the Castrol GTX High Mileage Ford Mustang. Following his Traxxas Nitro Shootout victory on Sunday, Force was strong on Monday, defeating Robert Hight, Matt Hagan and Ron Capps in the first three rounds. Force was appearing in his eighth Chevrolet Performance U.S. Nationals final and was seeking his fifth victory. He finished the regular season as the points leader and will open the Countdown playoffs with a 30 point advantage over teammate Hight.

Rookie Top Fuel driver Crampton, appearing in his first Chevrolet Performance U.S. Nationals, powered past Steve Torrence with a 3.766 at 327.98 in the GEICO/Lucas Oil dragster to claim his second Wally trophy of the season. He was close to sweeping the weekend, as he posted a runner-up finish in the $100,000 Traxxas Nitro Shootout bonus event on Saturday.

“Steve-O (Torrence) is one of my great friends out here and he beat me at the Brainerd race,” said Crampton, who will be seeded eighth in the Countdown. “We said to each other before the run that we were going to go out there and have some fun. It’s pretty awesome that he and I got to share a final round here at the 60th Indy. If I would have been runner-up, I probably would have been almost as happy, because it’s been a fantastic weekend for our team.”

Torrence was appearing in his second consecutive Indianapolis final in his Capco Contractors dragster, posting a 3.799 at 327.82 during the final. The result broke a one year drought from final round appearances for the Kilgore, Texas native. Torrence will be seeded fifth in the Countdown.

Doug Kalitta claimed the Top Fuel Countdown No. 1 seed and will open the playoffs with a 30 point advantage over Antron Brown.

Gray beats teammate to the line

In Pro Stock, Gray drove his Gray Manufacturing Chevy Camaro to his first U.S. Nationals victory, defeating teammate Dave Connolly in the final with a 6.641 at 208.42. It was the fourth career victory for Gray, who finished the regular season sixth in points, and his first win since the Las Vegas race last October.

“I really can’t describe this in words,” said Gray, who beat Shane Tucker, Allen Johnson and brother Jonathan Gray before the final. “If I've learned anything this year, I've learned that it's a lot different to go out and qualify [well] than it is to race on Sunday."

Connolly was appearing in his fifth final round at the Big Go, having collected victories three times. He was also runner-up at the event in 2006. Connolly defeated V Gaines, Erica Enders-Stevens and ended Jason Line’s three-race winning streak on his way to the final round matchup with his Gray Motorsports teammate.

Krawiec took home his first Indy win and third victory of the season with a 6.941 at 192.63 on the Screamin’ Eagle Vance & Hines Harley-Davidson, beating Jerry Savoie. The win was the 25th career victory for Krawiec, a three-time Pro Stock Motorcycle world champ.

“I’ve been fortunate to win three championships and 25 races now and I’ve finally got an Indy win,” said Krawiec, who finished second in regular season points behind teammate Andrew Hines. “I was joking that I could just step off the bike now, announce my retirement, and not run the Countdown [to the Championship]. I think I’ll stick around, though.”

Savoie was appearing in his second consecutive final on his Savoie’s Alligator Farm Suzuki. He beat Chaz Kennedy, John Hall and reigning world champ Matt Smith before posting a 6.987 at 192.58 in the final.

The drag race they call 'The Big Go'