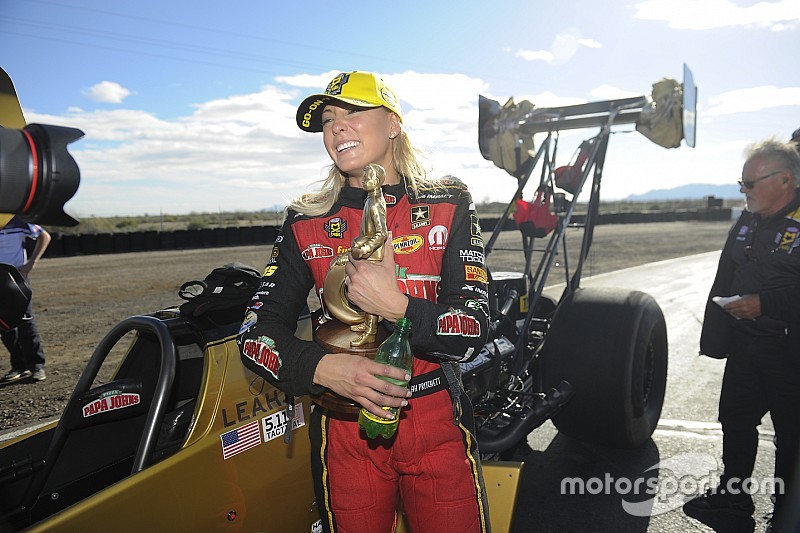 Last weekend's epic final between Top Fuel rising stars Leah Pritchett and Brittany Force was the highlight of the weekend... and we could have been writing a very similar storyline this time last year, as Anne Proffit explains.

Judging by the results at last Sunday’s 33rd NHRA Arizona Nationals at Wild Horse Pass Motorsports Park southeast of Phoenix, you might have thought you were watching instant replay when the two finalists for NHRA’s Mello Yello Drag Racing Series’ Top Fuel category came to the water box for burnouts.

This result not only marked the second time these two racers have met in the Arizona Nationals finals, but the second time Pritchett has beaten Force to the stripe. The big difference this time around was that while Brittany Force was again in the Monster Energy John Force Racing dragster, Pritchett has moved on since this time last year. Her first win came with Bob Vandergriff Racing, but since that operation folded in April last year, she’s become a Don Schumacher Racing employee. A successful one, too.

In fact it’s been a magical month for Pritchett, who unofficially broke the reigning Top Fuel record in her Papa John’s Pizza DSR dragster in testing before the season began (3.654 sec); her sponsorship is renewed and expanded with the Kentucky-based pizza chain, she won from pole at the Circle K Winternationals in Pomona and repeated that success just two weeks later.

Her success in the first two races of a 24-race campaign marks the first time a Top Fuel driver has achieved this feat since Gary Scelzi 20 years ago. Admittedly, Pritchett had a bye in the first round but still turned a 3.69-second run, a feat she would repeat in the second round when she defeated Clay Millican. She slowed to a 3.7 for the final two rounds (beating Shawn Reed in the semifinals) but her success is now real. And heady.

Pritchett admits that adapting from Vandergriff’s open cockpit to the capsule on her DSR dragster took time, as did learning to work with Todd Okuhara and Joe Barlam. Now though, all is running smoothly. “We’re blessed with the equipment, the talent, the capabilities of the people and everyone it takes to make us win,” she remarked, “so I’m happy that I could hold up my end of the bargain.”

For the second consecutive race, Pritchett was joined on the podium by DSR Funny Car teammate Matt Hagan, who secured his second straight flopper victory. Their achievements mark the 30th time that Don Schumacher Racing has won both Top Fuel and Funny Car in one weekend.

Two-time champion Hagan, who had a difficult off-season losing both a grandparent and his younger brother, started race day from the No. 4 position, surviving an all-DSR round when his Sandvik Coromant/Mopar Dodge Charger R/T beat the similar car of reigning Funny Car champion Ron Capps.

He commented: “Dickie Venables [crew chief] is killing it out there and the car’s going down the racetrack every lap. He is putting a real fast car underneath me and my lights are on point right now. I’m just feeling it; feeling this racecar, this race team.

“We’re just digging. Everybody is working hard. It’s just a great feeling to crawl in the car knowing you have the confidence that it’s going to go down the racetrack and run strong. When your lights are good, it’s a real hard combination to beat.”

Pro Stock continues to be a playground for the Summit Racing Equipment Chevrolet Camaros. Reigning champion Jason Line won the first race of the year against teammate Greg Anderson, who came back to win his second Arizona Nationals Wally trophy. To earn that victory and the points that go with it, Anderson defeated Kenny Delco, Shane Gray, 17-year-old rookie Tanner Gray (making his first pro semifinal in only his second Pro Stock race) and Drew Skillman, all of them driving Camaros.

The Anderson/Skillman final was a great race as Anderson laid a 6.547/211.43 run to beat Skillman’s 6.565/210.50. It marked Anderson’s 87th win and 140th final round in a stellar career in which the Mooresville, North Carolina-based driver has secured four Pro Stock titles.

“It was a brutal day,” Anderson said, “but I knew it was going to be. This class is awesome and as strong as it ever was. I think every race I had today was decided by less than a foot - you just can’t get better racing there,” he noted.

With great weather conditions throughout the Phoenix meeting, exceptional racing was the standard on the Wild Horse Pass dragstrip. Both the national record in Top Fuel and numerous WHPMP track records fell during the three days of racing.

And now it’s time to regroup and get ready for the Top Fuel, Funny Car and Pro Stock drivers, who are joined at the Amalie Motor Oil Gatornationals in Gainesville, Florida by Pro Stock Motorcycle and Pro Mod for the start of their campaigns. At this time full fields are expected for all classes save Pro Stock (subject to change) with the Pro Mod contingent of 30 cars leading the way. There are also eight Lucas Oil Sportsman categories, nearly all of them over-subscribed at this race.