Force, Crampton and Enders-Stevens winners at The Strip at Las Vegas Motor Speedway 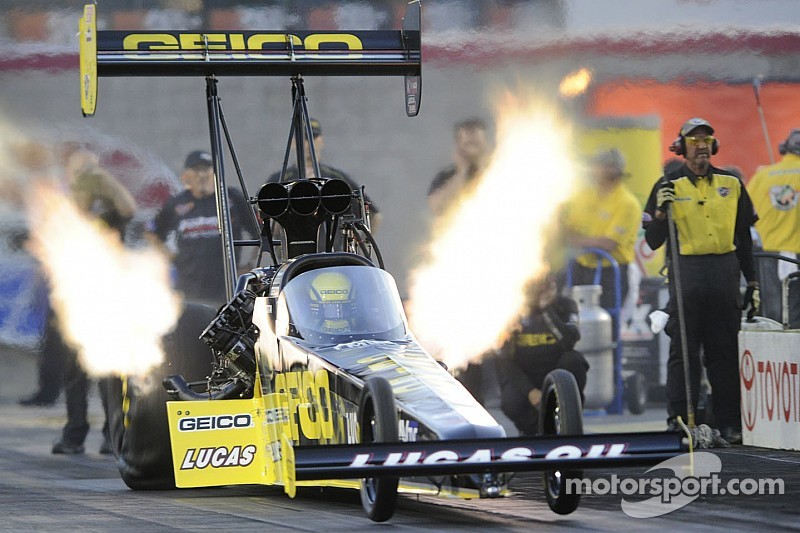 LAS VEGAS – John Force, the winningest driver in NHRA history, raced to the Funny Car victory Sunday in his Peak Antifreeze Chevy Camaro at the SummitRacing.com NHRA Nationals at The Strip at Las Vegas Motor Speedway.

Force, a 16-time Funny Car world champ, clocked a 4.148-second pass at 312.35 mph to defeat teammate Robert Hight in the final round. Hight trailed with a 4.154 at 306.05 in his Auto Club Chevy Camaro. This marks Force’s 142nd career win and fifth career win at The Strip at Las Vegas Motor Speedway.

“Robert is my best team,” Force said. “He’s hot on that Christmas tree so I really got to get after him. The win was good but all that we’ve been through, with financial change, my sponsors promised to keep me competitive, win championships and I could build safety. We were lucky today and I’ll take lucky any day because it buys us some time to learn.”

En route to his first final round appearance and win of the season, Force sprinted past Chad Head, defending world champion Matt Hagan and 2014 event winner Alexis DeJoria in earlier rounds. This is the first win by a Chevy Funny Car since Phoenix 2003. Force, who qualified eighth, is No. 6 in the NHRA Mello Yello Series points standing.

Hight, the 2009 Funny Car world champion and runner-up at this event one year ago, beat Ron Capps, Cruz Pedregon and Tommy Johnson Jr. on his way to the final round. The president of John Force racing moved to third in the points standings with the runner-up finish.

Event top qualifier Matt Hagan moved back into the points lead despite losing in the quarterfinals.

In Top Fuel, Crampton posted a performance of 3.902 at 301.33 in his Lucas Oil dragster to better Larry Dixon’s 4.466 at 201.73 in his C&J Energy dragster. This marks Crampton’s third career victory and first at The Strip.

“It’s huge,” Crampton said. “Obviously, we want to win right out of the gate but that hasn’t always been the case for Morgan Lucas Racing. To win at the fifth event and technically go to the final at the Four-Wide, we’re gathering some good momentum and it’s a huge boost for our entire team. We got a great hot track race car.”

Crampton, the 2014 Rookie of the Year, has never lost a final round and moves to fifth in the points standings. He qualified fifth and raced past Troy Buff, Steve Torrence and No. 1 qualifier, J.R. Todd, before beating Dixon in the final.

Dixon bounced back quickly from a spectacular crash a month ago in Gainesville, Fla. and worked his way up to the final as the No. 15 qualifier. The three-time winner at The Strip at Las Vegas Motor Speedway raced past defending world champ Tony Schumacher, Clay Millican and Spencer Massey to advance to his 109th final round appearance.

Despite a first round exit, Antron Brown held on to his series points lead.

In Pro Stock, Enders-Stevens scored her 13th career victory and first of the season on a holeshot start in the final by posting a 6.674 at 207.24 in her Elite Motorsports Chevy Camaro against Vincent Nobile’s 6.674 at 207.91 in his Mountain View Tire Camaro.

“Just very proud for Elite Motorsports and Elite Performance,” Enders-Stevens said. “My guys work so hard and continue to give me a consistent race car which has been a struggle to start this year. I think we got our hot rod back and I guess we can start saying Vegas is our lucky track. Winning is so dang challenging and to be able to come here and do what we did yesterday and double up again today is certainly a high-pressure situation but my guys thrive on it and perform very well under it. I’m so proud of them and proud of our team.”

As the second qualifier, she outran Matt Hartford, Jimmy Alund and Greg Anderson before her win light against Nobile in the final.

Enders-Stevens had a well-rounded weekend, doubling up on victories by winning the event and the K&N Horsepower Challenge, a Pro Stock specialty race, on Saturday. She defeated Nobile in the final round of the K&N Horsepower Challenge, as well, and pocketed $50,000 for taking the specialty event and an extra $25,000 for doubling up. She is the first driver to sweep both events in consecutive seasons since Bob Glidden accomplished the feat in 1987 and 1988.

Enders-Stevens moved into second place in the points standings, and now trails series leader Jason Line, who lost in the second round via a red-light start.