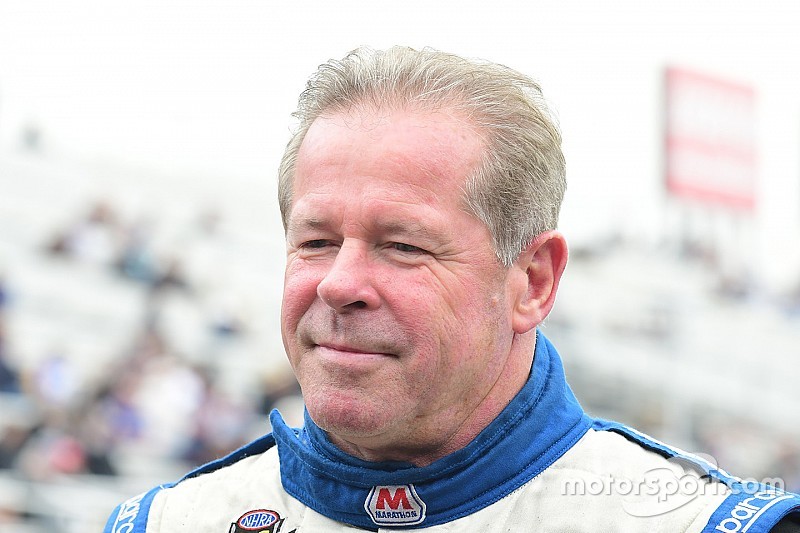 One of Dodge’s star names in NHRA racing, Allen Johnson, is to retire from the sport at the end of this year.

At a time when its Pro Stock Mello Yello class is hurting for participants, NHRA is about to lose one of its few full-time Dodge participants. Allen Johnson is calling it quits at the end of the 2017 season, parking his Johnson & Johnson Marathon Oil-sponsored Dodge Dart.

The decision comes two years after primary sponsor Mopar departed the team run by Johnson’s father Roy, who has been racing Mopar products since his youth, and who is responsible for the team’s engine development. Mopar had been Allen Johnson’s primary sponsor for 20 years, through his 2012 championship season and up to the final races of 2015, when the team wrapped its Dart in a ‘Thank You’ message to Dodge.

Mopar at that time said they wanted to go in a different direction, taking their Pro Stock partnership to Elite Motorsports, at that time in the midst of becoming two-time consecutive champions, with Erica Enders at the helm. The decision to depart Johnson & Johnson came before NHRA changed the playing field by mandating electronic fuel injection (thereby removing the bulbous intakes atop the cars’ hoods), enforcing a 10,500-rpm rev limit and trimming wheelie bars to induce more front-end lift at the hit.

What those changes have done is reduce fields and forced all but a few hardy members into Chevrolet Camaro racecars. It hasn’t been the best move for what was once the factory hot rod class of NHRA, one with great rivalries between manufacturers GM, Ford and Chrysler. Once Johnson retires, there will be few Dodge/Mopar racers left in Pro Stock.

Johnson, who marks his 22nd year racing in NHRA’s Pro Stock class in 2017, was a bit tearful in making his retirement announcement, but did leave the door open to a few appearances as he makes the adjustment from racing 24 times each year. As he thanked his family, business cohorts that keep family enterprises running at home in Tennessee and Mopar for their assistance over the years, Johnson said the end of the 2017 season, “Just felt like the right time. We’ve had a great run and we’re not sure what the future holds.”

The Johnson family’s partnership with Marathon Oil was intended to last only through the 2016 season but the company “was so satisfied they stayed on an extra year,” Allen Johnson explained. That retention allowed the team to continue to race through this year.

Johnson allowed he’s had some interest, both inside the Pro Stock paddock and elsewhere, from entities that could purchase some of the team’s rolling stock and campaign it in 2018. Some of them want to run full-time, others wish to campaign a part-time effort in Pro Stock.

Johnson does not place blame for his retirement on the changes in Pro Stock.

“I think the class will get better as time goes on. Electronic fuel injection became fun for me. Dad always used to tune the carburetors but I took on a lot of those duties when EFI came in. I really enjoy doing that.”

Looking toward this weekend’s Pro Stock “burnout battle” that will incite racers to exercise long burnouts for points and money, Johnson commented, “I might have some fun with that.” Most class racers use testing time to prime their tires for competition; they’ll be able to do that in actual competition during the 63rd Chevrolet Performance U.S. Nationals.

Johnson, whose 2012 championship was life-altering, has 27 NHRA national event wins, good for ninth overall in Pro Stock class history. His 37 No. 1 qualifying positions earn him sixth all-time in class and 22nd overall in NHRA history. Allen and father Roy have raced to 59 final rounds in 497 career races, all using Mopar equipment.

“We’ve celebrated an NHRA World championship, captured wins at historic tracks like Gainesville, Pomona and Bandimere, and basically lived our dream for 22 years.”

When asked if he had any goals left, Allen Johnson replied, “My goal is to win this race; I should have in 2016 but messed up in the finals,” he acknowledged.

With the competitive nature he’s been showing, including a third-place qualifying two weeks ago at Brainerd, that goal isn’t too far off-pace.