Force after 150th win: “The monkey taught me so much” 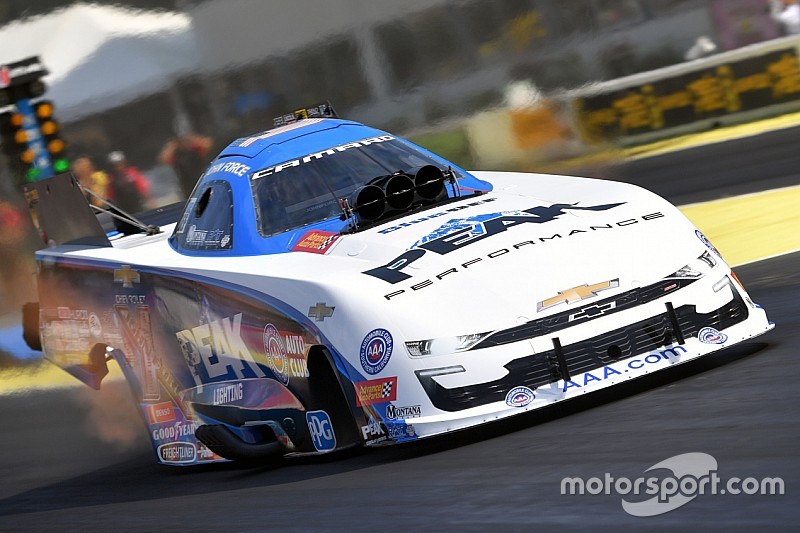 John Force says that waiting 25 races for his 150th NHRA Funny Car triumph was a monkey on his back which “drives you nuts”, after clinching his landmark triumph at Pacific Raceways on Sunday.

Force, who turned 70 in May, beat Jim Campbell with the quickest time of eliminations at 3.895 seconds, produced a 3.909sec run at 327.95 mph to beat teammate and son-in-law Robert Hight and then thwarted Don Schumacher Racing’s Jack Beckman with a 4.014 at 320.97mph.

That set up a meeting with Ron Capps – the driver who lies second in the all-time Funny Car win standings with 62 – who he had raced against 19 times in Finals. Force then rocketed down Pacific Raceways’ 1320ft in 3.971 seconds at 320.58 mph so that he now owns a 12-8 Final win record over Capps.

The typically garrulous Force explained: “Well, it’s been 25 races, Denver last year. [Crew chief] Brian Corradi and Daniel Hood and Tim Fabrisi have had to put up with me all year, not happy with the way the car steered, how I sat in it, not happy with so many things.

“So sometimes you need a slap in the face. And that was the monkey that made me focus to live my car. It’s been fast the last four or five races. Give me a good racecar, I can race. I may not be as young as these kids and a hot shot on that [start-light] tree. But I’m excited [about] the future of our sport. There’s so much potential out here.”

Force, who didn’t score his first NHRA victory until he was 38 years old and whose first 50 races on the NHRA circuit produced no wins and 17 DNQs, has now won at least one race in 32 of the last 33 seasons.

He reflected: “Never thought I’d be lucky enough to get five wins. I remember going to nine finals and somebody says, ‘Hey, is this like winning your first championship or your first final round?’ I said, ‘Don’t put that in my head. It’s too crowded in there!’

“I had to stay away from it, not think about it. TV was setting up special shows about me and then I fail. But I didn’t fail; I was doing the best I could. Failure is part of it and that’s what I told [daughter] Brittany. When you get that gut ache and turn it into a positive – that’s the key.”

On the subject of retirement, Force commented: “I have no complaints. I’m 70 years old and I do it because I love the fans, and God will tell me when it’s time. You’ll know when your old body says you’re done. I’m giving it all I got and I’m glad I got 150.”