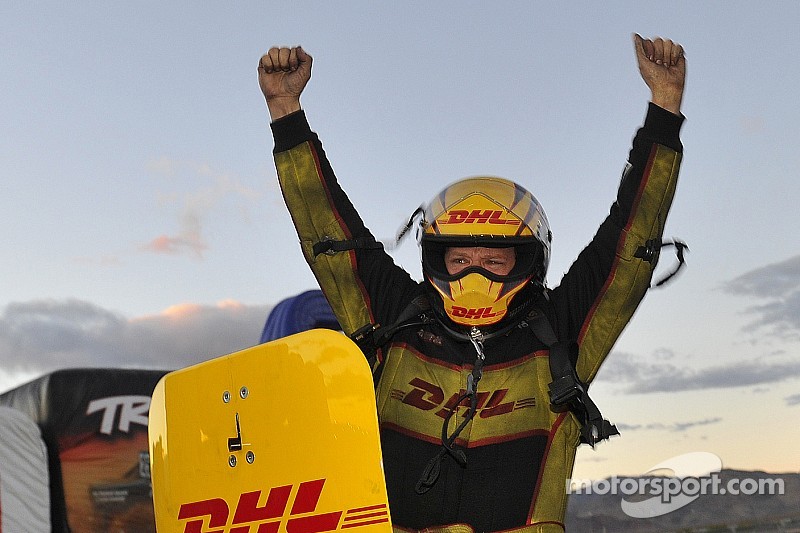 Andrew Hines all but clinches bike title with one race left.

Erica Enders-Stevens reclaimed the Pro Stock points lead with one race remaining by earning a major victory at the NHRA Toyota Nationals at The Strip at Las Vegas Motor Speedway on Saturday.

Enders-Stevens powered her Royal Purple Chevy Camaro to a 6.587-second pass at 209.36 mph to defeat reigning world champ Jeg Coughlin in the final. It was the fifth win of the season for Enders-Stevens and 11th of her career. She dominated at Las Vegas this season, also winning the SummitRacing.com NHRA Nationals in March. She will now head to the Auto Club NHRA Finals with a 17-point lead over Jason Line.

“I wanted to come in with a positive attitude,” said Enders-Stevens, who is trying to become the first female Pro Stock world champion in NHRA history. “When I walked in the gate on Thursday afternoon I had a good feeling. I was a nervous wreck in Reading. I’ve never felt that way in my racing career. I decided I was going to give it to God, keep the faith, do my best and let him do the rest. That quick mental change made everything run so much smoother today.”

Line, driver of the Summit Racing Chevy Camaro, entered the event with a 35-point advantage and reached the semifinals, falling to Enders-Stevens after a red-light start.

In Top Fuel, Massey claimed his third victory of the season by outrunning J.R. Todd in the final round with a 3.756 at 330.88 in his Red Fuel powered by Schumacher dragster. It was Massey’s 17th career victory and third at Las Vegas. With the win, he climbs to second in points, 109 behind series leader Tony Schumacher heading into the season finale.

“The car started off running extremely well,” Massey said. “We started running a new chassis this weekend and we wanted to see where it would lead us. It showed a lot of promise. For [crew chiefs] Phil Schuler and Todd Okahara and my entire team, we’ve been working so hard all season long to finally make good solid runs and be consistent on race day.”

Schumacher came into the NHRA Toyota Nationals with a 136-point lead over Doug Kalitta, but fell in the first round to Billy Torrence.

First for Worsham since 2009

Worsham picked up his first Funny Car win since Richmond 2009 when he drove his Toyota Camry to a performance of 4.064 at 318.39 to take the victory over 16-time world champion John Force. It was Worsham’s first win of the season following runner-up finishes at Englishtown and Dallas. He denied Force a chance to climb within one point of series leader Matt Hagan.

“I think we’ve been to probably four finals and this is the first time we’ve won with Kalitta Motorsports,” said Worsham, who won a world championship in Top Fuel in 2011. “We’ve almost had lane choice and low elapsed time in all those finals and we didn’t bring out a big enough stick. Today, the big bat was out. This was all about the crew chief and the crew and the job they did today.”

Hagan fell to Worsham in the semifinals and holds a 21-point lead over Force heading to Pomona.

In Pro Stock Motorcycle, Hines, who entered Las Vegas with a 25-point advantage over Screamin’ Eagle Vance & Hines Harley-Davidson teammate Eddie Krawiec, raced to the win with a 6.965 at 191.02, defeating reigning world champ Matt Smith. Hines, who claimed his class-leading sixth victory of the season and 38th of his career, holds a 92-point advantage over Krawiec in his bid for a fourth world championship.

“I don’t want to play defense,” Hines said of his preparation for the Auto Club NHRA Finals. “I’m going to go on the offense. I don’t want to give up any bonus points during qualifying. I want to keep it over 80 points so we can roll into Sunday with the championship basically mathematically locked up.”

The NHRA Mello Yello Countdown to the Championship finale is Nov. 13-16 with the 50th annual Auto Club NHRA Finals at historic Auto Club Raceway at Pomona in Southern California.

The race is the 23rd of 24 in the NHRA Mello Yello Drag Racing Series.