Langdon and Morgan make good runs, but come up short in Topeka

TOPEKA, Kan. – It was a frustratingly short Sunday for the Lucas Oil camp at the NHRA Summer Nationals at Heartland Park Topeka. Both Shawn Langdon's Lucas Oil/Speedco Top Fuel dragster and Larry Morgan's Lucas Oil Pro Stock Ford Mustang were eliminated in the first round in close races.

Langdon was the favored No. 5 qualifier and was paired with Terry McMillen in the first round. Langdon's car had been strong during qualifying but things started to fall apart at half track in his Round 1 effort.

"The tires started spinning," Langdon said. "Then I lost a couple of cylinders, it threw off the blower belt and shut off a little early. It was just enough for Terry to squeeze by." 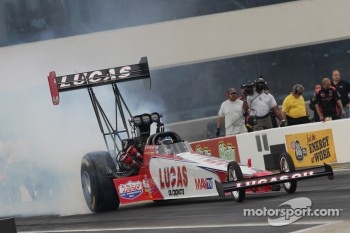 "He made a food run to keep us honest," Langdon said. "It's part of drag racing; Just when you think you have things figured out, the car thinks differently. It's something we're going to have to keep in mind for next time."

Morgan raced Allen Johnson in Pro Stock and his red, white, and blue Ford Mustang made a great run, but Johnson was good enough at the starting line to steal away the win.

"It kicked out of fifth gear on the burnout and I couldn't go across the starting line," Morgan said. "I guess I got all screwed up, and I was just late (at the tree). My fault. I told my guys, 'I didn't know which way the car was going to go when I let the clutch out.'"

"I think we've got a real good direction," Morgan said. "We had some tires that we ran the whole time, and we decided to change them today, and it made for a different car. We'll see. We think our engines are pretty close. We just missed the tune-up here."

Morgan and Langdon will next be in action at the June 3-5 NHRA SuperNationals at Old Bridge Township Raceway in Englishtown, N.J.