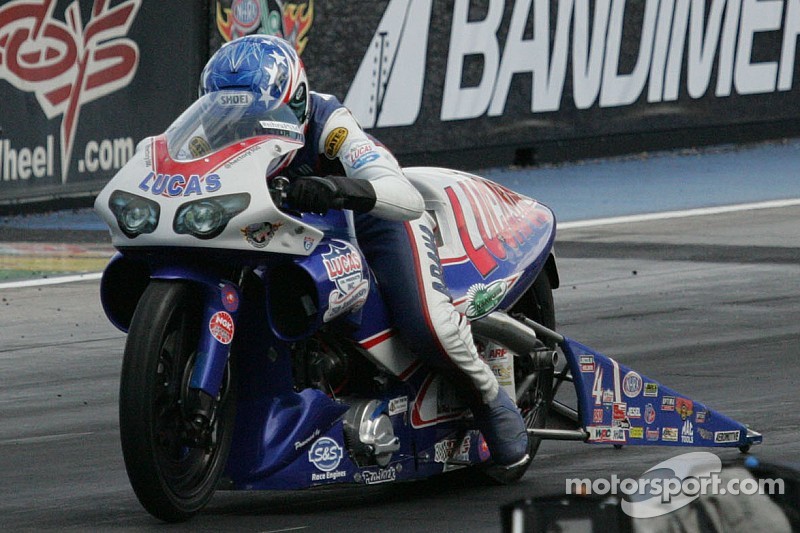 Tony Schumacher has taken command of the Top Fuel class...

MADISON, Ill. — There is built-in pressure of competing for a world title during the NHRA Mello Yello Drag Racing Series Countdown to the Championship. Pro Stock Motorcycle rider Hector Arana Jr. is well aware of that, which means he is going to do everything he can to avoid adding to it.

That includes counting points and worrying about other riders’ performances, especially the three competitors that are ahead of him in the Countdown to the Championship standings.

But that also means Arana Jr. has to take care of his own business during the six-race NHRA playoffs, something he knows he must improve on starting this weekend at Gateway Motorsports Park during the third annual AAA Insurance NHRA Midwest Nationals.

We're doing everything in our power to ensure that we'll have no more failures the rest of this Countdown season.

"If we worry about the points, we're going to stress ourselves out,” Arana Jr. said. “We can't do anything about that. All we can do is do our best and go rounds. If we do that, the rest will take care of itself. That's how we've got to keep our mindset."

Arana Jr., who is currently in fourth place riding his Lucas Oil Buell, knows he needs a breakout performance to keep within striking distance of points leader Andrew Hines, who holds a 125-point advantage over Arana Jr. It also needs to happen soon as only three events remain following the race in St. Louis. Arana Jr. might not be stressing over the situation, but he is aware of the task ahead of him.

"I'm very motivated,” Arana Jr. said. “We're working hard this week, going through everything little thing on our bikes. We're doing everything in our power to ensure that we'll have no more failures the rest of this Countdown season. If we can do that, and I can ride well, then I believe we still have a good shot."

There’s no denying Arana Jr.’s championship capability but it is a matter of getting everything on his Buell to come together at the right time. That hasn’t happened through the first two Countdown races, as Arana Jr. has just one round win and fell in an opening-round matchup to Shawn Gann last weekend in Dallas.

But as Arana Jr., who has eight total wins and one in 2014, readies himself for an improvement in St. Louis he knows there is potential for much more.

"We have more and we have good equipment,” said Arana Jr., who has qualified second at each of the first two Countdown events. “For whatever reason, we're struggling. But we're very motivated to do well, not even thinking about the Countdown, but to get back on top. That's where we want to be, and it's where we're going to strive to be."

Arana Jr. will have to ward off a strong list of challengers in Pro Stock Motorcycle, including defending winner and reigning champion Smith, who is still chasing his first win of 2014. Hines, who won in Dallas, Eddie Krawiec, who is in second after winning the Countdown opener, and Steve Johnson, a finalist at the first two Countdown events, all sit above Arana Jr., while other contenders include Hector Arana, Steve Johnson, Michael Ray, John Hall, Angie Smith and Scotty Pollacheck.

But Arana Jr. plans on making an immediate impression during the first qualifying round and continuing that throughout the weekend in St. Louis.

"St. Louis is a fast track,” Arana Jr. said. “We've got to make sure all our motors are ready. We need to study all our notes and try to gather what's going on with our tune-ups. That way we can nail it from the beginning and then tune it in with the three other qualifying runs and be ready for Sunday."

After winning the first two events of the Countdown, Tony Schumacher has taken command of the Top Fuel class in impressive fashion and currently holds the points lead. Other championship contenders in the Countdown are reigning champion Shawn Langdon, Antron Brown, who has won the past two years in St. Louis, Doug Kalitta, who was the points leader heading into the Countdown, Spencer Massey, Khalid alBalooshi, Steve Torrence, J.R. Todd, rookie Richie Crampton and Brittany Force.

In Funny Car, 16-time and reigning world champ Force used St. Louis as a springboard to his 2013 world championship and has three wins at the facility. Ron Capps also has three St. Louis win and is among a list of challengers trying to unseat Force. Featured in that group is Robert Hight, Courtney Force, who won the most recent event in Dallas, Matt Hagan, who won the first race in the Countdown, Alexis DeJoria, Tommy Johnson Jr., Tim Wilkerson, Cruz Pedregon and Del Worsham.

As always, fans will have the opportunity to interact with their favorite drivers as they’re granted an exclusive pit pass to the most powerful and sensory-filled motorsports attraction on the planet. This unique opportunity in motorsports gives fans direct access to the teams, allowing them to see firsthand the highly-skilled mechanics service their hot rods between rounds, and enjoy some cherished face time and get autographs from their favorite NHRA drivers.

Tony Schumacher doubles up at NHRA in Texas