Seattle finals pushed back to Brainerd and Indy 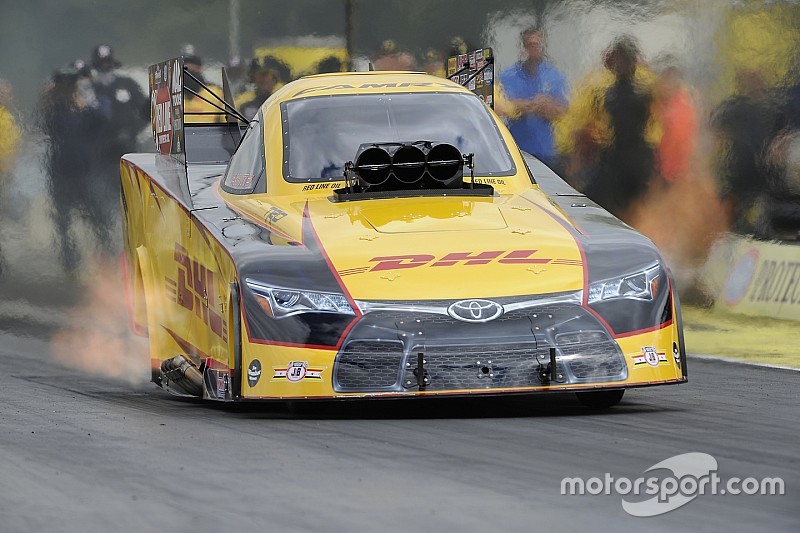 Rain has forced NHRA to reschedule the Top Fuel and Funny Car finals from Seattle’s weekend races for Brainerd, while Pro Stock’s Seattle Final will be held at the US Nationals at Indy.

The NHRA Northwest Nationals held at Pacific Raceways in Kent, Wash. got as far as the final rounds, but the warm Friday temperatures gave way to a cool Saturday – and ultra fast passes for the nitro classes – before rain hit on Sunday. After a delayed start, racing ensued through to the finals when darkness arrived and wouldn’t allow the series to complete its final rounds for Top Fuel, Funny Car and Pro Stock.

Unusually, the series has decided to wait until the U.S. Nationals at Lucas Oil Raceway in Indianapolis to conducts the “Seattle” Pro Stock final between Aaron Strong and Vincent Nobile. Seattle No. 1 qualifier Nobile is looking for his first Wally since 2014; Strong seeks his first professional Wally. Period.

The Sunday delays were also extended by Courtney Force suffering an accident that was a near mirror image to Alexis DeJoria’s pelvis-fracturing shunt a week earlier in Sonoma. Force’s Chevrolet Camaro edged to the center line, she corrected and her car made a left turn to the wall, moving it sufficiently to need mending time.

Force was in pain as she exited the car but after X-rays, CT scans and other investigations at the local hospital, she was released late afternoon to deal with pain in her left elbow, left shoulder and right knee.

At Indy, of course, both of the nitro-fueled classes also have special races within this most prestigious race. The Traxxas Nitro Shootout takes place at the largest gathering of NHRA professional and Lucas Oil sportsman racers.

The manner in which these three final rounds will be run hasn’t been decided yet by NHRA, but it’s this writer’s hope that the Seattle final rounds can occur after the first round of competition at Brainerd and in Indy. That way all six of these competitors will have an idea how the track is responding to their cars and what setup to use to best take advantage of the conditions.