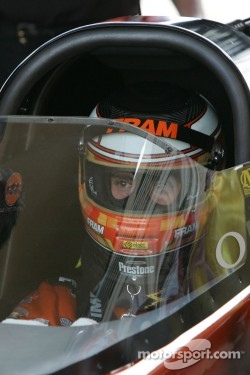 Native Canadian Arend, a 49-year old resident of San Dimas, Calif., has posted four wins in nine final-round appearances in his 18-year Funny Car career. He took over the controls of the DHL Toyota Camry Funny Car for Kalitta Motorsports at the Mac Tools U.S. Nationals in 2008.

Arend was the 7th seed for last weekend’s inaugural Traxxas Shootout in Dallas. Arend took out Robert Hight in the first round. Similar to their race in Charlotte, Arend beat Hight in a pedal-fest. In the second round, Arend lost by mere feet to eventual Traxxas Shootout winner John Force.

The DHL “Yella Fellas” team drives into the midway point of the Countdown to the Championship in the tenth position in points.

Kalitta, a 48-year old resident of Ann Arbor, Mich., is a three-time champion (2004, 2003, and 2001) in St. Louis. He has amassed 32 NHRA Top Fuel title trophies in 64 final-round appearances. He has finished in the top ten in Full Throttle championship points in every season of his 15-year straight-line career. He was the 1994 USAC National Sprint Car champion.

For the second consecutive weekend, Kalitta was able to achieve the top speed in qualifying (322.34 mph) in Dallas. Kalitta left the Lone Star State in the seventh place Countdown to the Championship spot.

St. Louis has been extremely kind to Kalitta. Along with his three wins, he was the 2005 No. 1 qualifier and the Top Fuel runner-up in 2010 eliminations.

Native Australian Grubnic, a 49-year old resident of Bozeman, Mont., is in the Optima Batteries Top Fueler this weekend in St. Louis.

Grubnic is an 18-year Top Fuel veteran and earned his first career Top Fuel victory in Topeka in 2005, becoming the first racer born outside North America to win an NHRA Top Fuel event. Grubnic, known affectionately by his peers and fans as “Grubby”, has three wins in his career, including a second win in Topeka in May, with 16 final-round appearances.

Grubnic also has had past success at Gateway. He was the 2004 St. Louis runner-up to his teammate Kalitta. He was also the No. 1 qualifier in 2008 and heads to the Arch 10th in the standings.

The newest addition to the Kalitta Motorsports nitro-fueled racing stable, the Tequila Patrón Toyota Camry Funny Car driven by Rookie of the Year contender Alexis DeJoria, will also be competing this weekend at the AAA Insurance Midwest NHRA Nationals. With 2011 Top Fuel World Champion Del Worsham at the helm of the Tequila Patrón flopper as crew chief, “Team Green” is currently in 13th place in Full Throttle Funny Car points. DeJoria had an exciting weekend celebrating her first year full-time in the NHRA Full Throttle Funny Car class and her birthday, which was on Monday. John Paul DeJoria, Alexis’s father, and television personality Jesse James were onsite throughout the weekend in Dallas.

DeJoria was able to qualify in the top half of the field for the fourth time in the last six weekends in Dallas. Although DeJoria has never raced at Gateway, she will head their continuing her successful rookie season in the 13th place in points.