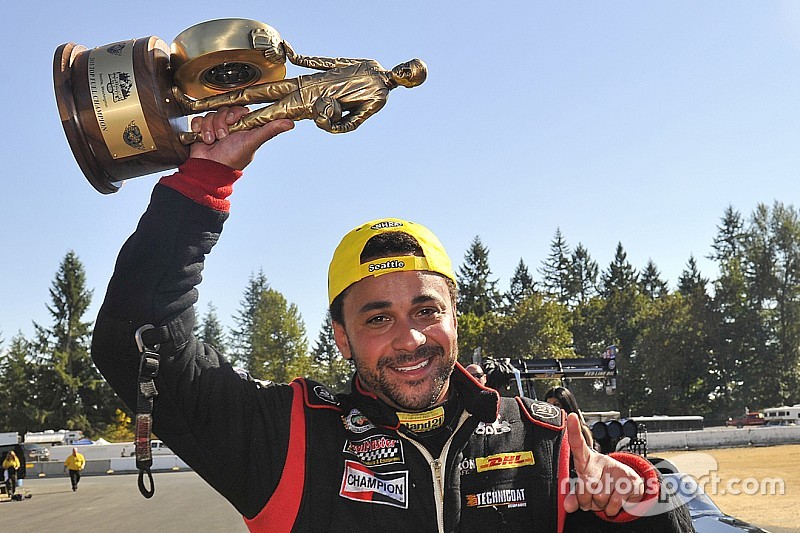 Following Del Worsham’s departure, team owner Connie Kalitta has made significant changes to the format of his team, the most significant of these being Top Fuel winner JR Todd’s switch to the Funny Car category.

Todd will replace Worsham in the DHL Toyota Camry Funny Car which is dedicated to the memory of Connie Kalitta’s son, Scott, who died in 2008. Todd’s move allows Troy Coughlin Jr, a rookie who was originally going to run only a partial schedule for the team, to get a full-time seat in the vacated SealMaster Top Fuel dragster.

Coughlin Jr. will thus partner with 2016 Top Fuel championship runner-up Doug Kalitta, while Todd will be joined by Alexis DeJoria and Paul Lee in the Funny Car ranks. Coughlin, Jr., DeJoria, Kalitta and Todd will all compete full-time with Lee planning a part-time run.

Todd, who finished fourth in the Top Fuel championship this year, said: “Connie told Jim O [Oberhofer, the team’s VP of operations and tuner of Doug Kalitta’s rail] that the DHL Toyota is a special car and I was the right guy for the job, which was a huge compliment to me.

“I am going to miss Del as a teammate. He has always been one of my heroes. I want to also say a huge thanks to SealMaster and their awesome franchisees. They are great people and it was an honor to represent them.”

Todd who has nine wins and has twice placed in the top five in the championship, added: “Ever since I worked with Nicky [Boninfante] and Tommy [DeLago] on a Funny Car, driving one has been in the back of my mind. The DHL Toyota has quite the legacy and it is such a huge honor to be picked to drive it.”

Filling Todd’s shoes in the SealMaster dragster will be a challenge for Coughlin Jr., 26, as he enters the category with such an elite team.

“I am thrilled to be competing full-time for Kalitta Motorsports in 2017 with an incredible backer like SealMaster and their franchise owners,” he said. “The car is one of the best looking machines on the racetrack and it is awesome to know I will have a car that can compete for the title.”

Coughlin Jr. won the 2013 NHRA Super Gas title in Division 3 and is a two-time U.S. Nationals winner. In 2015 he drove in the NHRA J&A Service Pro Mod series and earned Rookie of the Year honors. In his drag racing career, Coughlin Jr. has competed in Junior Dragster, Super Comp, Super Gas, Top Dragster and Pro Mod. He earned his Top Fuel license earlier this year.

The car will be team owner and drag racing legend Connie Kalitta, who massages the car and its 10,000-horsepower-plus engine alongside Rob Flynn, continuing their roles after this outstanding 2016 season.

Jim Oberhofer said: “J.R. is a very motivated driver and continues to be a perfect fit for Kalitta Motorsports. I know he will be a great ambassador for DHL and Toyota and I look forward to see what the season holds.

“I am also thrilled to get Troy into a full-time seat. He proved to be a very precise driver during our test session in Las Vegas [following the late October race] and I know he is going to do a great job.”

With the shuffling of drivers, the Kalitta squad is reorganizing the team’s crew chief roles. Todd’s DHL Toyota Camry Funny Car will continue to have Jon Oberhofer as its leader, but with Todd Smith moving over to be a “Yella Fella” from his previous role as tuner of teammate Paul Lee’s Camry. Former DHL co-crew chief Boninfante joins DeLago on the Tequila Patron Camry driven by DeJoria.