Don Schumacher Racing Funny Car teammates gave it all they could in the season final two events, and at Pomona Jack Beckman took his victory and earned a spot in our 2012 top 20 moments.

NHRA's Full Throttle Drag Racing Series battle for the Funny Car championship seems to always be filled with last-minute melodrama and 2012 was no different. The title came down to a final race battle between Don Schumacher Racing teammates Jack Beckman and Ron Capps.

Beckman, a cancer survivor finished second to DSR teammate Matt Hagan in 2011 and looked, after Capps' win in the penultimate round at Las Vegas like he was going to be a bridesmaid to Capps this year. For his part, fellow Californian Capps was trying to snag his first title after being runner-up three times prior to 2012 (1998, 2000, 2005). 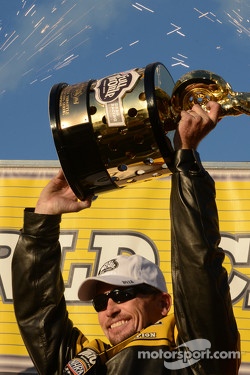 (A quarter of the way through the 23-race season, DSR team owner Don Schumacher shuffled cars and crews in his four-car Funny Car squad, giving Beckman's tuner Rahn Tobler, his car and crew to Capps while Fast Jack got DSR veteran co-crew chief Terry Snyder and new crew chief hire Todd Smith, who'd been working on Top Fuel cars for most of his career, most recently with Kenny Bernstein.)

It all came down to the final race at Pomona where Beckman came in with a four-point advantage. When Capps lost in the second round of the World Finals on the Auto Club Raceway dragstrip at Pomona, the title belonged to Beckman, making Capps a four-time bridesmaid and Beckman a first-time champion. - by only two points!

Earlier in the season I said a monkey could tune Fast Jack and he'd be able to carry the car to the end of a 1000-foot racetrack all by himself. It was Beckman's great driving talent, the efficient duo of co-crew chiefs Smith and Snyder and the new purpose-built DSR chassis/engine combo that got them this title. That Beckman invited his entire crew to celebrate on the victory podium with him showed all the class and grace this true champion has at his disposal.