Who's to blame for NHRA Pro Stock's predicament? 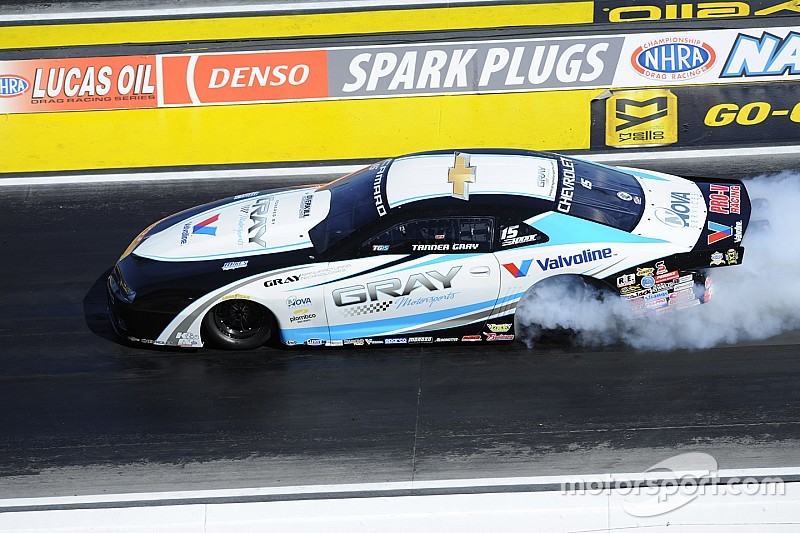 It seems probable that from next year NHRA's struggling Pro Stock category will no longer be part of the full 24-race schedule. That is emphatically not a smart solution for the sanctioning body's self-created problem, argues Anne Proffit.

As NHRA completes the first half of a 24-race weekend with the Summit Racing Equipment NHRA Nationals in Norwalk, Ohio, much talk in the pits concerns the fate of its Mello Yello Drag Racing Series’ Pro Stock category.

The factory hotrod class has been overwhelmed by Chevrolet Camaro racecars, with only a couple of Dodge entries in the mix for each race weekend and only Bowtie drivers have held Wally Trophies.

It’s not often a full field of 16 or more competes to undertake Sunday’s eliminations, making qualifying a simple matter of seeing which Chevy is fastest. As in the recent past, the three giants of the Pro Stock class are KB/Summit Racing, Elite Motorsports and Gray Motorsports. There is young blood in the category, with racers like Tanner Gray, Erica Enders, Vincent Nobile, Drew Skillman mixing it up with the veterans.

So what’s the problem? Why the lack of entries?

Partial blame has to be the change of rules for 2016, which removed carburetors in favor of a low-tech-level electronic fuel injection system, removed the upper body-area induction system for a low air intake, forced a 10,500-rpm rev limit on all cars and shortened the wheelie bars in the hopes of getting more elevation to the front wheels at the hit. At the same time, Goodyear was introducing a new tire spec, thereby making the class pretty much a jumble of new rules.

Significantly, these mechanical and aerodynamic changes were announced in late July 2015, with the updates mandated to begin with the first race of the succeeding season, in February. That’s a very short lead time, and the two results were 1) fewer racers able to heed the bell for the start of the 2016 campaign and 2) a lack of parity between the two manufacturers. Prior to the announcement, two-time and reigning Pro Stock champions Elite Motorsport elected to switch from Chevy to Mopar. Suffice to say it didn’t work out at all for Elite, who went back to wearing bowties this year.

With diminished entries – those entry fees do help pay the bill – NHRA has been at a loss to do anything for Pro Stock. The sanctioning body claimed, when moving to FOX television for its broadcasts, that showcasing the factory hotrods was part of the rationale, but to date the coverage has been spotty at best. It’s very seldom that NHRA does any marketing for Pro Stock and the class has languished without a tiller.

And now there’s talk about removing six races from Pro Stock’s schedule reducing them to 18 events. NHRA claims this would save money, but for the major players, the savings aren’t as great as they might appear because, as in every form of motorsport, it’s the cost of personnel, parts and, to a lesser extent travel fees that take up a great deal of the cost.

Sponsors don’t exactly flock to Pro Stock, because there’s less bang for the buck as FOX dedicates less time to the factory classes than they do for nitro Top Fuel and Funny Car. If NHRA is also giving the impression of paying less attention to Pro Stock, that’s essentially going to tell the fans that’s OK, and put off potential sponsors.

This writer places the onus of responsibility for NHRA’s Pro Stock predicament on the sanctioning body itself. The rule-makers could have announced the technical changes for a later date, allowing smaller teams the opportunity to gather more backing to allow added test runs; last-minute decisions create a bigger gap between the affluent and the rest.

NHRA could also have used its promotional monies to advance the cause of Pro Stock, but not enough attention is given to Pro Stock (nor Pro Stock Motorcycle, with the exception of series partners Harley-Davidson, but that’s another rant) and it shows.

NHRA holds a race within a race for all four of its professional Mello Yello classes: the Traxxas Nitro Shootouts for Top Fuel and Funny Car take place at the Chevrolet Performance U.S. Nationals each year, whereas the Pro Bike Shootout - now with naming rights taken by Mickey Thompson Tires - occurs in Sonoma at the Toyota NHRA Sonoma Nationals, and the K&N Horsepower Challenge for Pro Stock occurs each spring during the Denso Spark Plugs NHRA Nationals on the Strip at Las Vegas Motor Speedway.

That last might have to be changed if NHRA foolishly goes with the rumored decision to lock Pro Stock out of six races next year. It’s been reportedly discussed that the dates chosen for elimination would be at tracks that have two races each year. Those include Pomona, which starts and ends each season, Las Vegas and Charlotte, with three other venues to be named later. This seems ludicrous at best, as Pomona and Las Vegas are always crucial for any championship.

A far better idea than reducing appearances, which diminishes any sponsor’s exposure and ROI, would be to better promote the class, make it more affordable by, perhaps, increasing that rev limit to 11 grand so the Mopar crowd might have a chance (their engines work better at higher revs) and allowing this class to be more open, having the wheelie bars either removed or further shortened so that the cars show more of their bellies. There are many more ideas, most promoted by fans who love Pro Stock.

While many race fans flock to see the flames of the nitro cars and the side-by-side excitement of Pro Stock Motorcycle, the technology in drag racing is in Pro Stock. Getting a naturally aspirated racecar – with doors – to go more than 200mph down the quarter-mile in around 6.5 seconds isn’t a task for the backyard tuner. It’s a serious and exciting game that deserves to continue as a full-season class.

But if technical changes aren't perceived by NHRA as an economically viable option, if reducing the championship's schedule is seen as the only way to steady the decline in the number of participants, then the sanctioning body's prime decision makers need only look in the mirror to see who's to blame.