Who will prevail in the prestigious U.S. Nationals on Labor Day weekend? 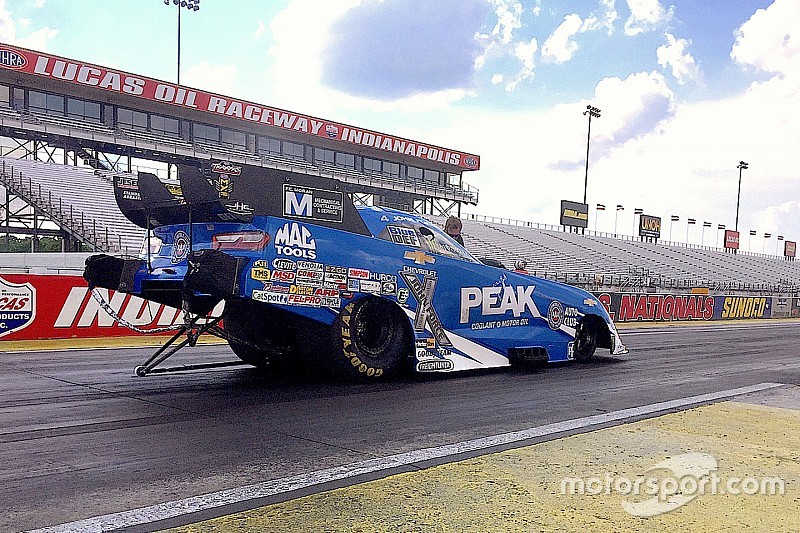 Every major American racing series has a standout event: NASCAR opens each season in February with the Daytona 500 and INDYCAR celebrates Memorial Day weekend at the Indianapolis 500.

Racing for the 63rd U.S. Nationals trophies begins on Wednesday and continues through to Labor Day, Monday, September 4th. The grounds at Lucas Oil Raceway are filled with racers and fans, who plan for months to attend this race, known as the Big Go. In drag racing, doesn’t get any bigger than this.

In the four professional categories, Top Fuel, Funny Car, Pro Stock and Pro Stock Motorcycle, racers get five, rather than the customary four opportunities to qualify. At this race they’ll need it as every single class has more than 16 entries, meaning some teams won’t make the cut and won’t race on Monday. There are 1.5 points given during the U.S. Nationals; current standings could easily change by the time Monday’s Wally trophies are awarded and the six-race Countdown to the Championship playoffs begin.

There was an online fan vote for these two positions, for the past week. Voting ended Tuesday and the top vote-getters were McMillen and Force. All entries received lottery balls, the number of entries commensurate with their fan votes and the finals were held on Wednesday on Indianapolis’ Monument Circle to determine each driver in this competition, which pays $100,000 and bragging rights to the winner.

Thanks to their top numbers in the online voting, both McMillen, last year’s Top Fuel leading vote-getter for this event and 2016’s Funny Car Shootout winner Courtney Force each secured the magic ball and the opportunity to go for the big prize, even though each must meet the top driver in the first round of Traxxas competition, Antron Brown and Ron Capps, respectively.

It might be simplistic to suggest Top Fuel victory at the U.S. Nationals will go to Tony Schumacher. After all, the eight-time dragster champion has won this race 10 times, including 2016 when he also won the Traxxas Nitro Shootout. Schumacher has a single win this year but has qualified for the six-race Countdown to the Championship.

There are 18 Top Fuel cars expected on the massive Lucas Oil Raceway grounds for the Big Go. Among those that don’t compete on a regular basis are Bob Vandergriff Jr., Ike Maier, Pat Dakin, Kyle Wurzel, Kebin Kinsley, Ashley Sanford and Aussie Wayne Newby. With extra points they could throw a wrench into some regulars’ seeding aspirations for the six-race Countdown.

In Funny Car the stakes are even higher. As with Top Fuel, there remain three slots available to earn Countdown status, but there are more drivers vying for those spaces. Six-race winner and reigning champion Ron Capps of DSR is at the top of the standings, followed by John Force Racing’s Robert Hight (2 wins), Capps’ teammates Matt Hagan (winner of this race last year and three races in 2017), Tommy Johnson Jr (1) and Jack Beckman in fifth, thanks to his two wins.

Courtney Force has qualified for the Countdown and holds sixth-place points coming into Indy, followed by her father, 16-time champion John Force (1), who has won this race four times, the most recent win coming in 2002.

The three drivers outside the playoffs but holding Top 10 points are eponymous team owner/driver Tim Wilkerson in eighth, J.R. Todd (1) and Alexis DeJoria (1) from Kalitta Motorsports in ninth and tenth place. DeJoria, winner at Brainerd bumped Cruz Pedregon from 10th place and leads him by a scant 12 points. Jim Dunn Racing’s Jim Campbell is 40 points back, Jim Head Racing’s rookie Jonnie Lindberg is 53 points out of 10th and former Funny Car champ Del Worsham needs to make up 60 points, all of them within range.

Pro Stock has its largest field since 2015, with 21 racers on the entry list. Taking the lead is Summit Racing’s Bo Butner’s Chevrolet Camaro, standing atop the points chase with his three wins. Rookie Tanner Gray of Gray Motorsports (4), Butner’s teammates Greg Anderson with two 2017 wins and six victories at Indy and Jason Line (1), the reigning titleholder. Drew Skillman’s Gray Motorsports Camaro has three wins and is fifth, followed by Elite Motorsports’ Erica Enders (1), her teammates Jeg Coughlin Jr and Vincent Nobile. All eight of these Chevy drivers have made the Countdown.

Behind them are Allen Johnson in his Dodge Dart and last year’s Camaro-driven race winner here, Chris McGaha, who has a single win for the year. Season-long competitors still out of the Countdown 10-spot include Matt Hartford, Deric Kramer and Alan Prusiensky, while part-timers Alex Laughlin, John Gaydosh Jr., Kenny Delco are hoping to make the field. A couple of returnees to the class are Johnny Gray and Larry Morgan, both formidable racers and former winners.

There will be fan participation for this contest to select the best burnout during each of the five qualifying sessions, which will result in the winner earning a set of Goodyear tires and earning 200 points; the runner-up gets 100 points. NHRA’s trio of announcers will select the two best burnouts per round and fans will vote via big-screen instant replay. Crowd participation and applause determines the winner. Following the fifth and final round of qualifying, points are tabulated and the driver with the most points receives a $5,000 grand prize.

Pro Stock Motorcycle has an entry list totaling 22 motorcycles for this biggest race of the season. And they’re the sole category without extra competition this week. Only five racers have qualified for the Countdown thus far, led by WAR Racing’s LE Tonglet, the series’ 2010 champion who leads all comers with five wins in nine races aboard his Suzuki. Tonglet is followed by two-race winners Eddie Krawiec on the Vance & Hines Harley-Davidson Screamin’ Eagle and teammate, reigning champion Jerry Savoie. Only Hector Arana Jr (Buell) and Matt Smith aboard his Victory have qualified.

The enlarged field is comprised of Suzuki riders Andrea Rawlings, Wendell Daniels, Odolph Daniels and James Underdahl. Buell riders in the hunt are Mike Berry and Ryan Oehler, while Mark Maquette will attempt to make the grid with his Victory motorcycle.

While weather in Indianapolis is always volatile, moderate temps and skies with intermittent cloudiness is forecast for the entire race meeting. There is a modest chance for very light rain on Friday and Saturday, and cooler, mid-70 temps for those two days could mean some great runs, in particular for Friday night’s opening salvo.