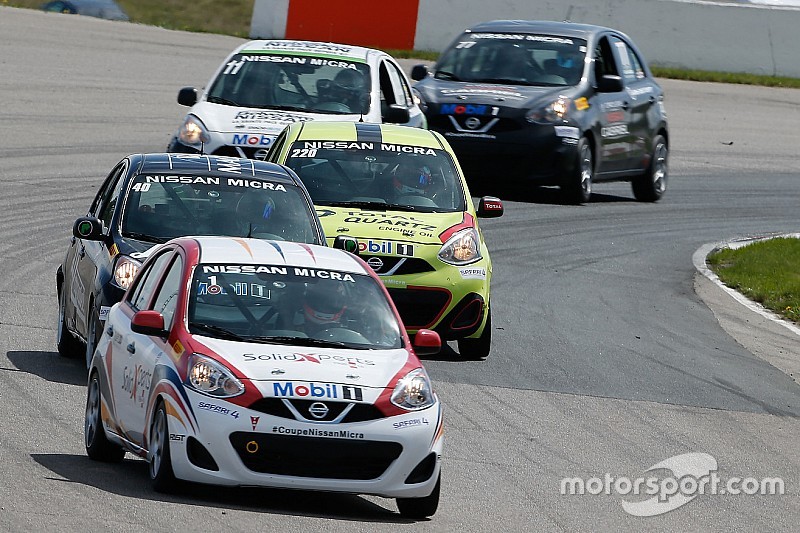 The Canadian Nissan Micra Cup will stage Rounds 5 and 6 of the 2018 season this weekend at the picturesque Mont-Tremblant road course sited north of Montréal.

The 15-turn, 4.26-km rollercoaster has presented the Formula 1 Canadian Grand Prix in 1968 and 1970, and is one of the favourite tracks amongst the Micra Cup competitors.

With three victories in four events, two-time Micra Cup champion Olivier Bédard will be one of the drivers to eatch for this weekend. Bédard still has a challenge ahead though – keeping Kevin King at bay. With his victory at Canadian Tire Motorsport Park in May, King was only driver to prevent Bédard from scoring four wins in the first four races.

“I’m approaching this race like any other one,” Olivier Bédard told Motorsport.com “I’m going to Mont-Tremblant with the clear objective to win both rounds. We just had a long, two-month break and I can really feel it. I want badly to race!

“The Mont-Tremblant track is fast with long straightaways where drafting plays a major role, so I expect to see really close action this weekend. Most competitors know the track really well and appreciate it. The pace is usually pretty fast. No one ever really succeeded to pull away from the rest of the field there. I look forward to some intense battles!”

Third place driver and Senior Class leader Normand Boyer, as well as fourth place driver Valérie Limoges, will also be among drivers to watch vying for victory. Rounding out the overall top-five is Frédéric Bernier, who has been the surprise driver through the start of the season. The Quebec City racer got his start in motorsports through the Nissan Micra Cup and has continued to progress through the ranks in the first four races. Bernier is just one point ahead of Fadi Mourad, the top Novice driver.

Another competitor to follow this weekend is 19-year-old Austin Riley from Uxbridge, Ontario. The young driver with autism made his series debut last year and has had a great start to his second season, battling in each race against much more experienced drivers.

The event will also be the motorsport debut for four rookie competitors. André Lapointe, Frédéric Bouthillier, Perry Wener and Éric Chaput will all contest for the top rookie spot of the weekend.

In addition to the action on the track, fans will also have the chance to get up close to the Nissan Micra Cup drivers and team members in the paddocks at the Mont-Tremblant circuit. Canadian Micra owners can attend the event free of charge - with Nissan offering two entry tickets for each owner - and can also participate in a parade lap on the track on Saturday and Sunday.

To attend the event free of charge, click here.

Kevin King wins Race 2 of the Victoria Speedfest at CTMP