Jimny dominates one of the world's toughest 4x4 events as the RFC teams took on the 15th running of the Malaysian challenge.

A 15th birthday of an event is always a big celebration. Only a select few of the world’s extreme 4x4 competitions can mark a decade and a half of existence and to get there they need one thing; legendary status. With years’ worth of stories of survival, unbelievably extreme terrain and conditions, life-long friendship-forming feats of teamwork, incredible recovery situations and once even a full evacuation by helicopter… Malaysia’s Rainforest Challenge has it all… every year!

24 teams took the start in the historic town of Malacca and although that might not sound such a long entry list they came from as far and wide as the USA, Australia, Poland, China, Brunei, Vietnam and Australia joined the Russians, Venezuelans and the locals, a total of 32 nationalities making the RFC the most internationally represented competition in the world. 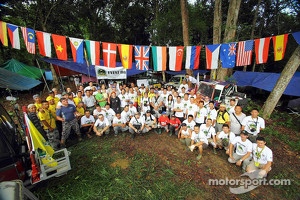 32 nationalities makes the RFC the world's most internationally represented event

In other events the prologue is simply to show off the cars to the spectators and press who won't make the trip out to see the rest of the competition, and perhaps to set the running order for the coming 'real' stages. The RFC though, which constantly takes the word 'extreme' to a different level, has man-made courses of piled rocks, JCB made jumps and holes and all sorts of other unnatural obstacles to test the teams to the absolute limit. And these first tests gave a clear glimpse of what would come in the rest of the event... over a particularly nasty pile of rough granite rocks the diminutive Russian Suzuki of Roman Kulbak and Alexey Konstantinovich bounced straight over to gasps of surprise from the onlookers while defending champion Mervyn Lim had to winch over, ripped-off shock absorber training behind... The Russian newcomer, straight from the snows of Vladivostock to the heat and humidity of Melaka in southern Malaysia, ran against the local defending champ racing in his home state. And surprising everyone at the end of the day’s action it was the foreign rookie on top of the time sheets.

But there is only one place that the RFC is famed for and that's the week-long crawl through the sweltering jungle in the middle of the rainy season. Every off-roader knows about something about mud, water crossings and winching... but clay that sucks in your boots with every step, trees covered in 3cm spikes, PTO winches so fast that the driver's head is knocked back against his seat... and then there's the leeches, mosquitoes and heat and humidity so high that you are soaking wet just standing there, never mind trying to get a car around the insanely technical SSs. Some people understand RFC to mean Rainforest Challenge; those that have tried it know it stands for Really Freakin' Serious! 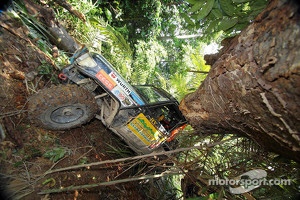 Suzukis 1,2 and 3. The small, nimble cars did well

30 Special Stages (SS) made up this year’s challenge across every obstacle the jungle had to offer… deep mud, impossibly steep winching sections, lots of water and slippery, rocky river banks. Each stage was worth 100 points for the fastest time, 95 for second… and so the only to get a good result is to go flat out, crashing diffs against rocks, whacking the body into trees, stretching the winch rope to break-point… this is why only the best teams in the best cars do well here. You need to know exactly where all the limits of your vehicle are because in almost every section you are just about at all of them.

Over the opening days it was local hero Mervyn Lim in his self-built, turbo-charged Vitara who took a clear lead with 6 wins out of 18, the second Russian team with two wins were their closest rivals, but it’s not just the short, technical SSs that the RFC is renowned for, it’s the now infamous mini-expedition known as the Twilight Zone. This year’s was the shortest at only 12km but although some competitors were laughing about how easy it was going to be, it turned out to be the toughest in the history of the event. The route took the surviving crews over 12 hills inching through foliage so thick that the sky was constantly blocked. Some descents were nearly 70 degrees and constant precision driving was needed as many of the ‘tracks’ were slanted to the side inviting careless teams to slide helplessly to the bottom of the ravine. Supplies of food, water and spare parts had to be carried in on foot by the hardy helpers and the best teams only managed to get through in a staggering 36 hours… For an idea about how tough it is some of the best 4x4s in the world took an average of 3 hours for every kilometre. Event organiser Luis Wee wasn’t too concerned though and laughingly christened it a ‘torture-fest’, although he sat in the camp with the standing-by rescue service listening to the radio should there be a need for assistance. 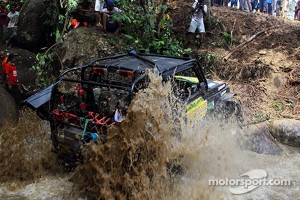 Rocks, water, mud and trees... Some sections had them all

There was some controversy through when the 200 points awarded for getting through the Twilight Zone were annulled. Lim thought that he deserved the points as the two Russians had left their stricken Venezuelan friends behind. But it was deemed that the 12km were so hard that every team had broken the rules in one way or another, either by taking short cuts or letting assistant team members drive the competition cars and so neck and neck it was down to the final 12 SS… and while the Russians had learned a thing or three in the previous 5 days suddenly it seemed like Lim had lost his nerve… Kulbak chalked up an impressive 4 wins against Lim’s 5, but crucially he was constantly in the Top 5 while Lim had a couple of DNFs…

Russians are famed for their never say die attitude and Alex Leonov explains what you have to do when you are in with a chance of victory in one of the world’s most prestigious 4x4 events. “At the end of one SS I wanted to get out to stop the stopwatch but the door was jammed.” So what did he do? “I head-butted the window with my helmet and crawled out,” he shrugged.

Something else the RFC is well known for is welcoming and looking after its foreign teams and this year special praise was given to Nunzio Coffaro and Adolf Chira who made the trek half way around the world from their native Venezuela. They showed great promise in the prologue stages with a win on SS 4 and two 2nd places but their big Toyota Land Cruiser 72 on 40 inch tyres wasn’t best suited to the incredibly tight sections in the jungle. They never gave up though and managed to come away with prizes in two categories, 3rd in the electric winch class and 2nd in the ‘Above 3000cc’ group. But as Luis Wee had no hesitation in saying, it’s not just those with trophies in their hands who deserve the applause, as everyone who took part is a winner. 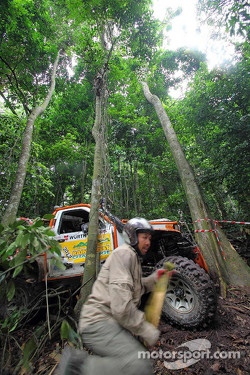 With 3000 points available from the 30 SS it came down to just paltry 53 points between Lim and Kulbak and it was the foreign rookie who came away with a historic win. The only first-timer ever to win, the first foreign team to win since the UK’s Simon Buck in 2002… as well as the fact that it was with an electric winch not one of the locally built ‘God-winches’ (although maybe it’s fair to mention that it was nothing less than a Gigglepin) and in a Suzuki with just a 1.3L engine, all added to the incredible achievement.

The sounds of angry engines and whining winches has been replaced in the jungle with the cries of the animals and after the rains it will be like no one was ever there, but all who were involved in the 2012 RFC will never forget. 15 and counting. The legend continues…

Slawson: King of the Hammers