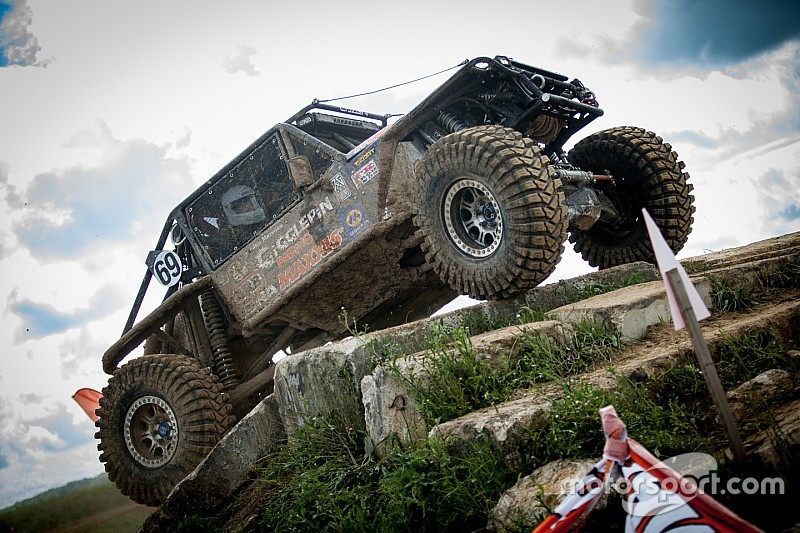 With open cabs and tyres designed for rocks not mud many weren't looking forward to another mud-fest like this race was last year. But although the Vision-X Night Stage took part against a background full of lightning with teams slithering around in the drizzle Saturday dawned bright and clear.

The 8 km long course full of rocks, deep holes, huge jumps, banked turns and long straights was tough for the front-runners, brutal for the mid-fielders and pretty much impossible for the ill-prepared… although that doesn't exactly apply to Rob Butler's sensational new 750 bhp IFS (independent front suspension) single-seater buggy. Last evening's test-drive was half a dozen laps around the workshop car park, which doesn't really compare to an Ultra4 track, and despite looking incredible drifting around the dirt turns he was expecting some teething troubles. They came in the form of the wheel bolts working loose so that the wheel wobbled enough to strip the bolts off the Spidertrax rear axle. An oil leak stopped him for another half an hour. But with the way it handles over the tough parts of the course like the rocks the car is a game-changer. The first of its kind seen in Europe.

From the very first lap though the race was all about Jim Marsden and he'd opened a gap of three minutes at the end of the first lap of 20 and no one else got close to his slowest lap time of the 20. It was a masterful display he was basically in a class of his own, although he was lucky he didn't have to go backwards at all as he lost first gear, something they need to fix before they go back out tomorrow.

The heated battle was for 2nd and 3rd between America's Bailey Cole in the car made famous by being raced by Top Gear recently and France's Nicolas Montador in his new build. The first advantage went to Cole as Montador had a rear tyre go flat and had to limp back to the pits early on, and then the gearbox would only select 1st and 2nd. But a few laps later Cole got stuck in the rock section so badly that he needed the JCB to come and get get him out. That left him and Montador side-by-side but Montador slipped through as he had the inside line the next turn. But a knocking noise was so severe that they decided to come into the pits to check it, but about 200 m away the front right wheel fell off middle of the last rock section… That's where the car stayed.

That let Portugal's Jorge XX, winner of the Night Stage, slip into 3rd Iy was a hard day at the wheel of the 2014 championship winning car though, as he pulled in after the chequered flag he could barely speak. The Tyreballs, air filled plastic packets stuffed inside the tyre, did their job of stopping it running flat even though the front tyre side wall had a fist sized hole in it.

The 18 laps of the Legends class was dominated by the UK's Dan Elias, as was the qualifying and night stage, even though he said he wasn't trying too hard. The LS1 engine has just been fully reconditioned so he's taking it a little easy so he can run it in properly. The set of Maxxis tyres pulled him around so well that he even managed to catch up with some Ultra4 cars in the class ahead. The car is so good that all he needs to do to tomorrow retain his 10 minute lead is put some more fuel in it. And he would like to thank his mum for the cake.

Tomorrow is more of the same. Another 160 km of sheer off-roading brutality. Stay tuned to see who becomes 2017 Maxxis King of France.