Wet and Wild at the Rainforest Challenge 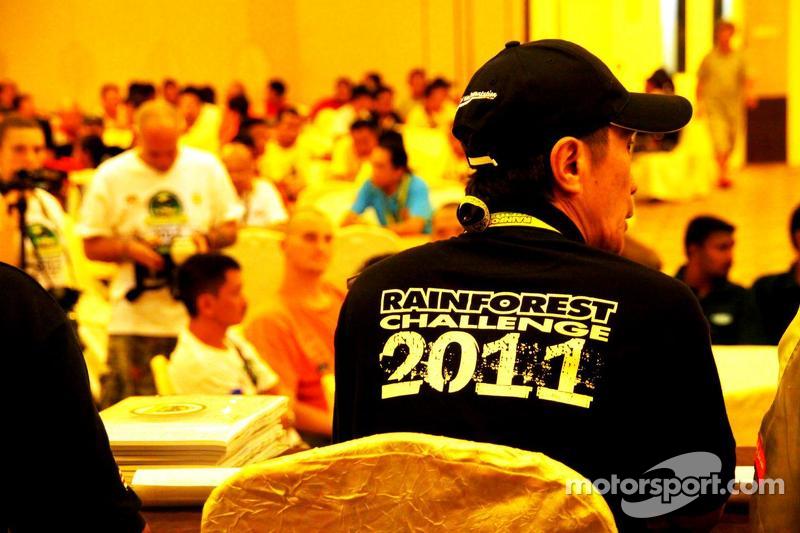 Clear skies on a mid-winter morning... Maybe that brings to mind images of mist and a touch of frost and gentle trails of log-fire smoke? Not for me, the sweat runs in rivulets run down my back and chest and in the infrequent drafts of not so hot air I can feel that the back of my shirt is drenched. This is Malaysia in the middle of the monsoon season and I am at the prologue of the Malaysian Rainforest Challenge, but although the event is infamous for what goes on in the pristine jungles here, on the first day, it's all about getting the spectators to see the action.

The guy with the excavator smirks but if Satan himself had been behind the controls the sections couldn't be any harder! There's a few acres of wasteland on the outskirts of Kualar Terrenganu on the east coast of Malaysia, and what looks like an abandoned building site has had large trenches and holes dug into it with strips of marking tape strung between closely arranged canes. Chief Marshall David Metcalf threatens the competitors with a host of penalties should anyone have any cheeky intentions and then crews look nervously around the six separate course wondering just how they'll get their cars through the obstacles. 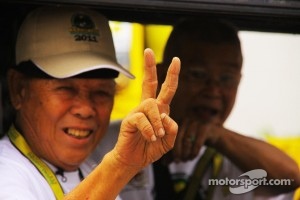 Smiles before 10 challenging days in the jungle.

First around the section in the trees where I have found a little shade is Tan Swee Kand and his co-driver whose name I kid you not, is Ling Ding. But this crew, in their little Suzuki Samurai are notable not for their names, but for the fact that their combined ages add up to about 130! Tan Swee is an effervescent 72 and his co-driver is a sprightly 67! Together they hope to prove that age is no barrier to competing in one of the world's toughest off-road events.

Here on a more serious note are the Land Rover Philippines Team in their bright-yellow 90, it's tuned 3.9L V8 reverberating off the trees. With a big new sponsorship deal from AirAsia they are out to prove a point and the way they tackled the meter-and-a-half deep mud hole, sliding in with fiddle breaks and then sorting the winch out before they dived in earned them respectful applause from the crowd of onlookers.

A little less confident in the first sections was Dima Sokolov from Russia, who has come out to co-drive with a Malaysian team. Maybe he believed the stories we told him about the cucumber-sized leeches or the monitor lizards lurking in the muddy water, but once the PTO winch was engaging properly Dima did Russia proud and hauled the heavy ground anchor through the sections... And they were doing a little bit better than Dennis Stepanenko and his new co-driver who no matter how loud Dennis shouted, couldn't extract the ground anchor from the claggy mud. 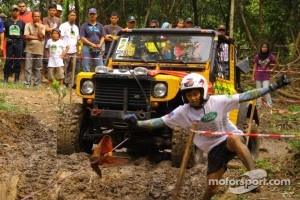 This evening the hotel forecourt has been turned into a bit of an impromptu open-air workshop as unlucky crews try to fix broken transmissions and winches. It seems that there will be a few that won't even make it into the jungle, never mind back out of it again!

It's wet... The organisers are already talking about contingency plans in case the monsoon is even heavier than expected and Dan, event director Luis Wee's Number 2, tells me that we are going into the same jungle that they had to abandon the entire field of cars in a few years ago... the people who came out on boats and helicopters were sent in for the cars. And it goes without saying that there is no internet where I am going... there's no running water, tents or toilets either, just army beds under a plastic sheet in the sweltering forest. So the full story only comes out of the Malaysian Rainforest when I do... in 10 days!