Patrick Long: “I had always hoped that my sports car career would be able to pave the way to drive in other disciplines” 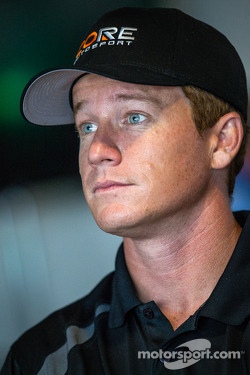 Both the Children’s Tumor Foundation (CTF) Racing4Research (R4R) program and Long will be experiencing the legendary Baja off-road race for the first time. The CTF and the unique R4R initiative is dedicated to improving the health and well-being of individuals and families affected by Neurofibromatosis, a common yet under-recognized genetic disorder that causes tumors to grow on nerves throughout the body. Neurofibromatosis – known as NF – can lead to blindness, bone abnormalities, cancer and excruciating and disabling pain. Donations to CTF/R4R can be made directly at www.Racing4Research.org.

Found in one of every 3,000 children born, NF is a more common disorder than many more widely known illnesses, including cystic fibrosis and Duchenne muscular dystrophy. The CTF/R4R program raises awareness and funds for research in the fight against NF through a busy and diverse racing program that includes annual participation in the prestigious Rolex 24 At Daytona sports car road race and a variety of racing series.

Long, 32, is one of the leading sports car road racers of his generation and the only American factory Porsche race car driver. He has won the Rolex 24 and every other major endurance road race in the world, including the 24 Hours of Le Mans, the 12 Hours of Sebring and Petit Le Mans. He was among the drivers in the No. 73 CTF/R4R Park Place Motorsports Porsche 911 GT3 Cup at this year’s Rolex 24 and has continued to support the CTF with the Park Place team all season co-driving with Patrick Lindsey.

“I had always hoped that my sports car career would be able to pave the way to drive in other disciplines,” Long said. “To be able to win the Rolex 24, and to win Le Mans, Petit and Sebring, the Baja 1000 would be right up there with my big endurance victories. It’s a huge race, it carries a lot of weight, the Baja 1000 has been on my racing bucket list for a long time.”

For his off-road debut, Long will partner with 2011 SCORE Lites Champion Navarro IV –who is better known in racing circles as “Cuatro” or simply “R4” – and Vic Bruckmann. Cuatro and Bruckmann won the Score Lites class in the Baja 500 earlier this year and in 2011, and now hope to add a victory in the legendary 1000 with Long to their list of accomplishments.

“So far, we have got the 500 down, we have got the formula down perfect for the 500,” Navarro said. “For the 1000, we really haven’t got that figured out yet and I am hoping this will be the year. If you had to choose between the 500 and the 1000 I would definitely really want to have both of them on my list of career accomplishments.”

While “Cuatro” is only 20 years old, he and Bruckmann will actually be the ones helping Long through his first off-road race. Bruckmann is actually the senior member of the team and knows what it takes – both in preparation and behind the wheel – to win Baja.

“Having Patrick onboard is really cool, I look up to him, he is kind of my hero,” Navarro said. “He is a Porsche factory driver and it is going to be kind of funny turning around and giving him pointers, but he is going to pick it up real fast. He is going to do a great job and be a key part of team getting the car to the finish in first place.”

Cuatro’s first connection with CTF came last summer when he was competing in his first year of Traxxas TORC Series Pro Lights.

“Racing for CTF is very special,” Navarro said. “The first time a family came out to one of my races, one of the ‘NF Heroes’ Tyler was amazing, it really made an impression on me. It is a great cause to be supporting, and seeing these kids come out to the race and have constant smiles on their faces is just incredible, so touching.”

“It has been an outstanding season on and off the track for the Children’s Tumor Foundation and our Racing4Research partner teams and drivers,” said Children’s Tumor Foundation Racing4Research National Program Director Jill Beck. “Now, to have the chance to end it with yet another endurance racing example for our young ‘NF Heroes’ at a legendary race such as the Baja 1000 with three great drivers and a top team is just fantastic.”

Aptly named for their tireless courage in fighting the disorder, “NF Heroes” are the brave young people battling NF who instantly become an amazing source of inspiration for the teams and drivers racing in their support. Hundreds of “NF Heroes” and their families have attended CTF/R4R supported races this year.

King of Portugal: Between a rock and a hard place

The inside story of the King of the Hammers