Robby Gordon fastest in Formula Off-Road; Paul Tracy back behind the wheel 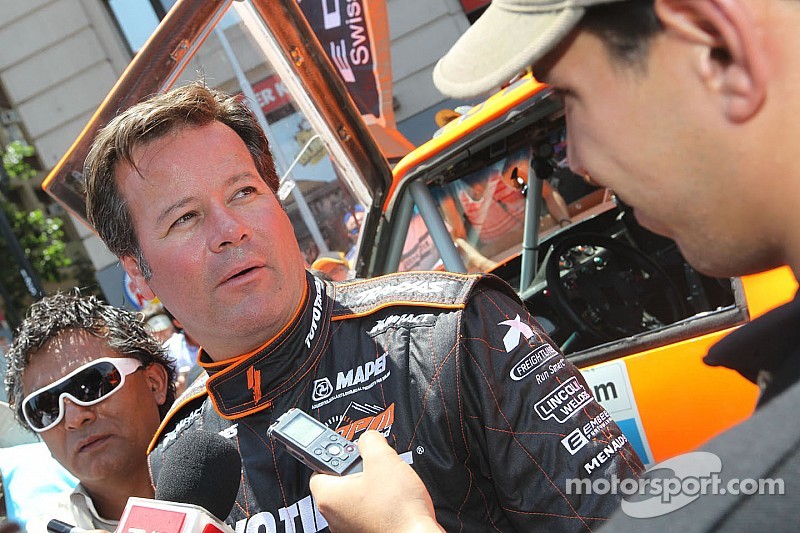 Tracy to return to competition at the Honda Indy Toronto in a TRAXXAS truck.

Robby Gordon (in photo) edged driver Sheldon Creed on the final lap of practice Friday to set the fastest lap in qualifying for Saturday’s first of two Formula Off-Road Presented by TRAXXAS races at the Honda Indy Toronto.

Although Gordon, driving the SPEED Energy/Toyo Tires/TRAXXAS truck, set the quickest time in the session, he will not start on the pole for the 2:20 p.m. race Saturday given that he will draw a number from a hat during tomorrow’s pre-race driver’s meeting to determine how many rows in the eight-truck field will be inverted for the start.  It is guaranteed, however, that he and Creed will start alongside each other when they get the green flag, but it is yet to be determined whether it will be row two, three or four.

Scotty Steele, who like Creed is 16 years old, was third quickest following by Toronto’s Paul Tracy, Aaron Bambach and Bill Hynes.  X Games gold medalist Apdaly Lopez, who also won earlier this year at Indianapolis, crashed in the first corner of the first lap of practice and did not record a lap time.  The final spot in the field will be filled by Long Beach, California’s Nick Vanis who was delayed in his travels to Toronto due to a family illness.

The eight trucks will navigate the same 11-turn 1.755-mile (2.84 km) circuit as the IndyCar series, however, the trucks will also negotiate four man-made metal jumps placed strategically along the circuit’s front stretch.

The Stadium Super Trucks that will race in Toronto will hit huge man-made ramps at more than 100 mph at multiple locations throughout the downtown street circuit hurling drivers nearly 20 feet in the air and 150 feet down course.  The series features identically prepared trucks which are made to resemble their scaled-down Traxxas radio-control-car counterparts.  Like their Traxxas namesake the trucks are designed to take flight.  However, unlike RC trucks, they produce 600 horsepower generating speeds upwards of 130 miles per hour and race on DOT approved Toyo Tires.