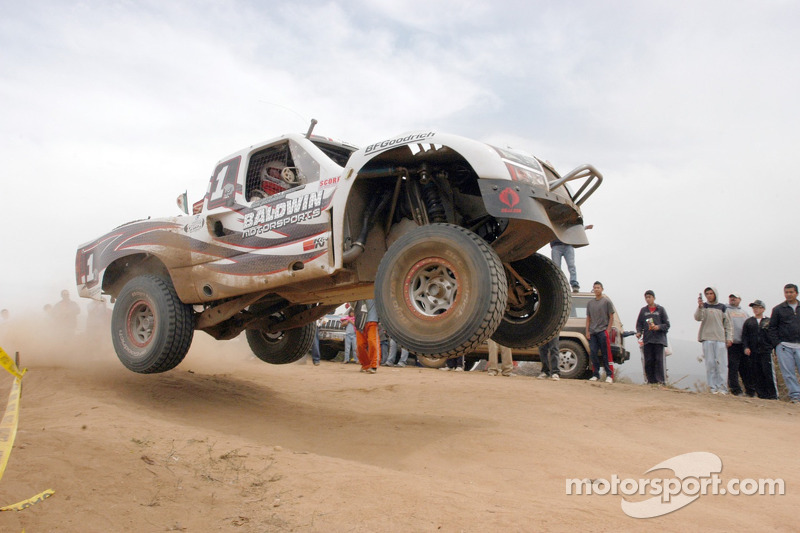 I am in the friendly town of Ensenada ready for my first taste of the legendary motorsport event known as the Baja 1000 but I’m a little at a loss to describe it properly. Coming from Europe I am used to the strict FIA regulations of the Cross Country World Cup which I was comparing this to, so the no-limit, anything-goes attitude out here seems a little strange. Imagine sitting an 8 year old boy down and asking him to describe the perfect off-roading event... he'd say something like the cars had to be as powerful as those in F1, have huge suspensions to be able to race on the toughest terrain and have massive tyres to bounce over big rocks. The race itself would have to go on forever, or at least a thousand kilometres, all over the roughest tracks that are strewn with rocks, ruts and washouts and would last long into the night while the crews are able to change drivers and co-drivers at will. The father who'd been listening intently would then say, “Son, welcome to the Baja 1000!” 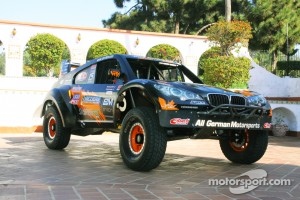 Spaceframe trucks powered by 850bhp V8s and suspension that would make the most extreme rockcrawler jealous are the norm here... on a 705 mile course that snakes back and to across desert mountain ranges. This is a very serious and hardcore event indeed and anyone who has ever sat behind the wheel of a 4x4 and started at an enticing piece of mud has heard of it. The Baja 1000 is simply a legend. Now in its 44th year, with nearly 300 vehicles in more classes than I can actually count, the organisers say 36 pro and 6 amateur, covering cars, pick-ups, quads and bikes... and thousands upon thousands of people crowding the scrutineering bay with souvenir and snack stalls lining the route. It seems more of a festival than a race and that is something that Sal Fish, event director since day one, was keen to voice his thanks for. “We really do come and take over this town and I have to really thank that all the Mexican security departments such as the army, police and especially Baja California Governor Jose Guadalupe Osuna Millan.”

SCORE is my family down here. No one judges me, they just let me race.

Jesse James will be the first Trophy Truck off the line tomorrow morning. “SCORE is my family down here. No one judges me, they just let me race,” he said. “For the past 7 or 8 years the first 40 odd miles are just 'lights out' because of the dust, so it will be good to have a clear road and hopefully I can hang on to the lead for a while... I think I am quite fast, so we'll see!”

Last year's overall winner Gus Vildosola Jnr is going into the 2011 event a bit more relaxed than he has been in previous years. “It's going to be a brutal race, but at least this time we don't have an 800lb gorilla on our backs to be the first Mexican team win the event outright!”

Mark Steele, known as Big Daddy is confident that daughter-in-law Heidi Steele will come away from the race as SCORE champion in Class 6 (trucks that run with V6 engines instead of V8s) but she will only be driving a few yards to get her name on the score sheet... as she is pregnant and can't properly fit in her racing suit. In the team bay behind the San Nicolas hotel the bonnet was off Cameron Steele's amazing GMC truck and I got a good look at the work of art that is the suspension set up of a SCORE Trophy Truck. Big Daddy said that each one stands at a cool $500,000. 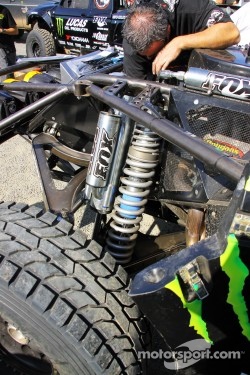 As good as it gets. Desert Assassin's suspension set up

But like any big event near the tail end of the field are some strange vehicles with more of a story to tell than a result to show. After dragging a Range Rover out of a scrap yard the friendly In Search of the Experience team are on the start line in a very standard 1989 Classic... and at number 5150 is an ambulance. “It's like the movie Cannonball Run,” I smiled. “No,” the driver replied. “That was much more organised than this!”

There are no press cars, it's just every man for himself but thanks to Big Daddy of the Desert Assassins I'll be in a chase car. I have no idea what I'll see or when I'll be back in town... but I know that there will be many amazing stories to hear when I do. I'll get some of the best in a couple days!

Wet and Wild at the Rainforest Challenge