Slawson: King of the Hammers

All Hail the King! The Hammers off-road event with 600 or even 700bhp beasts known as Ultra4 cars that are truly unlimited.

Seven short years ago this desert in Eastern California saw 13 friends out for a weekend’s ‘crawlin’’. Nobody noticed. But that day an idea was born, one which in just a few years later would come to be one of the world’s biggest and toughest off-road races. What about the Baja 1000 or the Dakar, I hear you ask. Trophy are trucks rear wheel drive and even if one thing like a front locker fails on these trails you will go no further. A rally-raid car would get off the startline, but no MINI would ever make it to the bottom of the first trail. 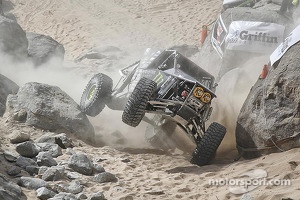 The machines that take on this insane event are purpose built space-framed, 600 or even 700bhp beasts built with no rules. The Ultra4 cars are unlimited and are built especially for this event! For the rocks you need big tyres as 37s will mean you get beached everywhere but too big and you run the risk of getting stuck between some of the bigger rocks and having too much weight at the end of the drivetrain. 40’ or 42’ are the accepted norm. For the desert sections where speeds get up to over a 100mph massive suspension set-ups are need to cope with the constant bumps and undulations. For power, if your transmission can handle it, more horsepower than an F1 car is fine! And this year the route took crews close to the border of the neighbouring military base so there was added emphasis on co-driving as a mistake on the map won’t just cost time, it might also get you shot!!

Event organiser Dave Cole promised nothing but toughness for the 2013 running and before the start said, “This is really the hardest course ever. Last year we went down a lot of the harder trails, this year we’ll be going up them!” And if the 170 mile course wasn’t a hard enough challenge Mother Nature came to add to the extreme element whipping up a 60mph gale and even threatening snow.

At the start line there were two rock-crawling specialists at the front with 2009 KoH winner Jason Scherer next to the only two-time champion Shannon Campbell, followed by two drivers known more for their desert driving skills, 3-time Baja 1000 winner Robby Gordon and TJ Flores… but the KoH course tests both skill sets to the limit. A pair of cars were flagged off every 30 seconds and so as well as battling each other wheel to wheel out in the desert and rocky trails competitors have their own race with the clock. Flagging away the whole field of 129 starters took nearly an hour and it was Campbell who blasted off into an immediate lead.

3 loops took crews across stretches of rough desert and then up extreme gullies and trails with glorious names like Outer Limits, Aftershock and Chocolate Thunder (which I guess is what happens in your race-suit when you try and drive up it) with one trail called Backdoor near the start of each lap needed to be done once. While the others blasted off on the desert section Randy Slawson headed up on the first lap and got over the 2 ½ meter sheer cliff without having to wait for any of the slower, lapped vehicles. By the time he’d scrambled through the others where far away in the distance… but his decision to get this section out of the way first would come back into play later. 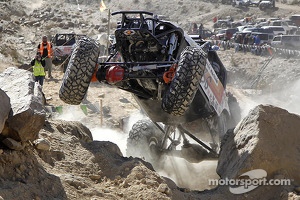 The time limit to get around the course is 14 hours. 14 hours of this!

Probably one of the biggest names in the race was Robby Gordon. Fresh from his exploits in the fabled Dakar just a few weeks ago he was back at the Hammers for his second attempt. Last year the engine died after just a few miles but after qualifying a highly creditable 4th he was ready for a serious try with experienced rock-crawling co-driver Lance Clifford. “We had a great run through the desert and passed Shannon and then we got to the rocks. He’s never done rocks before, only from qualifying last year. “Are we going up there?!” he asked and then when we got to the top he said, “That was cool!” But then we broke a tooth on the steering and eventually ended up stripping it out. We tried to carry on up Wrecking Ball but that wasn’t the best idea. We followed Shannon’s track up the side but it went a bit haywire and we slipped off the ledge and landed on the roof…” Two races in two months ended with a bright orange car lying prone upside down…

There are plenty of mind-boggling things to see on the dry lakebed of Hammertown but there was one guy that really caught my attention. A 650bhp Ultra4 car scrabbling up the rocks isn’t too unbelievable here yet only one is driven by a 17 year old! I cannot think of any other event in the world where someone so young is behind the wheel of something so powerful on a course so rough. Being the son of Shannon Campbell helps of course, but Wayland really impressed in his own right. “I started driving when I was 14, but just crawling, nothing fast and the goal here is just to finish as not too many people do. Anything after that will be a bonus,” he said before the race.

Everything looked to be going well… until the power steering pump failed and they had to spend an hour and a half on the course fixing it. “But by the time we’d got going again we’d been passed by so many people that we got stuck in trails which were backed up with like 15 cars. That took forever, but we got through all that and it was going smoothly until the third lap when in Spooners the car fell off a rock and the tires got wedged so tight that we had to winch out. That took forever too and then we realised that if we didn’t hurry up we’d miss the cut off time as you only have 14 hours to get around. At the end of the last trail we had 21 minutes to get 16 miles and I was pretty sure the car was about to fall apart! We finished with 20 seconds left until the course closed!” In a race where the likes of Gordon and Baja 1000 champions past and present failed he got home 23rd. “I am one proud mama,” said mum Tammy. 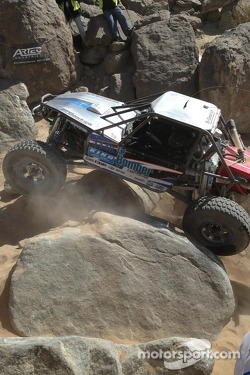 Randy Slawson on the way to a popular victory

Up ahead the leader Campell and pole man Scherer had to do the obligatory run up Backdoor which by now had been dug out by the spinning wheels of dozens of vehicles as well as being clogged up with slower runners… and this is what allowed Slawson back into the fight… until all of the Top 4 runners got caught up together in the appropriately named Spooners. It was Slawson who got through first and pulled out about 15 minutes on Campbell… but Campbell was clearly in hunting mode and with dust and rocks flying the times came down to 10 minutes and then 6… and then they were through the toughest trails and only had one called Elvis to go. Slawson came up on a slower car that was stopped in the middle of the track, tried to go up the bank but slid into it. There was only one thing to do. He drove right over the top of it. A few minutes later Campbell faced the same obstacle and tried the same technique… but wasn’t quite as successful as the leader…

At the finish Slawson was remarkably fresh looking considering what’d he’d just been through for the last 7 ½ hours and was also full of humour. “It was pretty uneventful,” he shrugged on the finish ramp. “We never got out of the car and that’s the way it’s supposed to be!”

Some twenty minutes later Campbell came belting over the jumps before the finish and was all smiles on the finish ramp. “I pushed a bit hard and cut a brake line and then got to Elvis and saw some people in the way. I knew that if I waited I’d loose the race so I tried to go around but rolled in front of them.” But that wasn’t Campbell’s only mishap. He drives alone so has to navigate as well as drive, but perhaps does one slightly better than the other. “I got lost and went off somewhere. I looked at the GPS, pressed some buttons and it went off, so I lost my cool and the second time there was another trail off the top of Wrecking Ball and I took it thinking wow, it must be a new trail or something. I turned around but must have got lost in my own dust or something as I went down the trail until I saw another truck head-on and he was pointing back up the trail behind me. I turned around and realised that I’d done this bit before! But Randy is a good person to loose to!”

So the dust settles and stories are told, ones of glory and ones of what went wrong. Only 27 of the 129 starters made it back, which is a grand total of 22%! And unfortunately the trail claimed a grand total of 100% of the foreign teams. Axel Burmann, Jim Marsden and Pier Acerni all saw pieces of broken metal rather than the chequered flag. But every single crew that lined up at the start of this amazing event will have stories to tell forever.

KoH is partnered with the Croatia Trophy in May, so teams are welcome to come and take part on a course laid out by Dave Cole. Then in September King of Portugal is another new event overseen by Dave that is surely not to be missed!