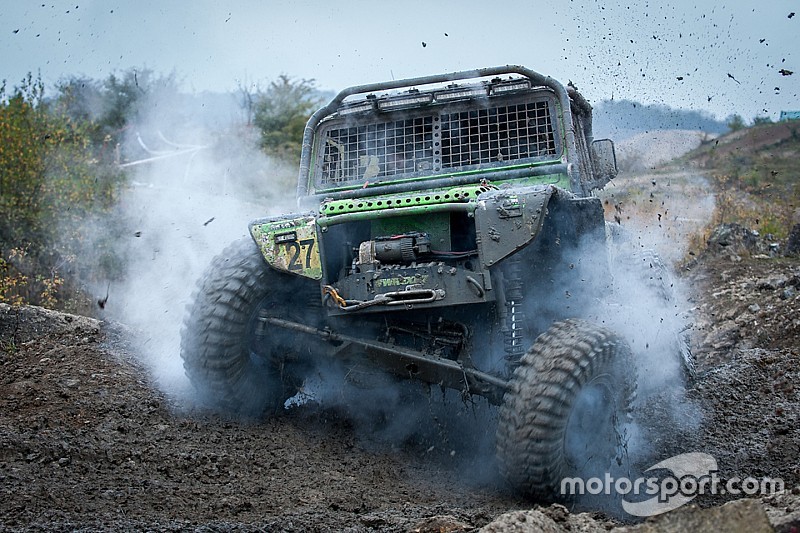 The ultimate form of off-roading in Europe is undoubtedly the Ultra4 Europe series. The rules allow for unlimited builds so machines with massive power are unleashed into the forest tracks but they are also built with insane rock crawling abilities so that they tackle courses that no other 4x4s could manage. The 2017 season saw events in France, Wales and Portugal and the climax was the King of Britain at the famous Kirton Off-Road Centre.

At first glance the 4 km circuit didn't look the most inspiring track in the world, especially compared to the last race in Portugal, but put 15 of the continents best 4x4's together in a rolling start and let them off to do battle and the spectacle creates itself… and the weekend of racing had the added benefit of having a grand total of four drivers in the fight for the overall title. At the top of the table was Jelle Janssens, who is known for driving with a maturity that belies his 21 years, a few points in front of the UK's Jim Marsden… who often drives with a style diametrically opposed to the young Jelle. Son of Ultra4 boss Dave Cole, Bailey, who won in France was lying in third but really needed to win if he was to have a chance at the win. He in turn was just a few points ahead of Rob Butler, who is still driving out the teething issues in his stunning IFS single seater.

Blasting around the qualifying course in a manor that harks back to the glory days of Group B rallying the Off-Road Armoury man duly took the fastest time by a full 8 seconds, which was no mean feat seeing as he was wearing orange tinted goggles and so couldn't tell the difference between the white prologue course arrows and the orange race track ones… That netted him pole position for Saturday's rolling start.

A whole field of Ultra4 racers blasting off at the same time is a sight and sound to savour. More than a dozen big V8s, most putting out close to 500bhp, feet flat to the floor, side-by-side, sliding around the first few corners together. The rocks on the track might have been artificial ones but course designer Chris Bowler knows how to create maximum pain with a lorry load of spare masonry and many crews struggled to get through the tricky sections, especially as the mud from the clay pit was dragged up them. Drivers found out that no lap was the same and with such a short course it wasn't long before backmarkers struggling along came into play meaning that new lines had to be found all the time…

Because of the shortness of the course and the size of the field all four classes were run in a new format where the Ultra4 cars had the track to themselves for an hour then had time in the pits for repairs while the Legends, Modified and Stock classes were let loose to battle it out for their class honours. (For more on these slightly lesser, bit no less spectacular, beasts please see the official website at www.ultra4europe.com)

The first round belonged to Marsden who drove masterfully to go from last to first to be where he needed to be for the championship but Butler was right on his tail looking for a way to get by on the fast track. Blinded by Marsden's dust though her went wide into one corner and took out two tyres. He needed to be recovered from the Euro4x4parts rock section and by the time he got back to the pits was actually running on three flats.

In the afternoon's heat the Gigglepin gremlins came back though and they lost time fixing the dreaded belt problems that have plagued them all year. Starting from 5th Butler was leading again… until the last lap when his front prop shaft exploded, dropping him down 9th place… but it wasn't all bad for the Off-Road Armoury team as at the end of Saturday it was Axel Burmann at the top of the timesheets. The Belgium has been an Ultra4 Stalwart for many years but with previous cars over the previous years has had the worst lack of anyone with mechanical failures plaguing his races. Finally in a real beast that can handle what he throws it at his Butler-built ORA IFS car took him to top. Cole was in 2nd, a place down from where he needed to be to have any hope of title, with France's Julien Guerton was doing well in 3rd in his aggressive-looking buggy.

But a few places back, after fixing a fuel system problem that made them nervous before the start, driving only as fast as he needed to was Janssens, totally in control, finishing 7th in the first heat and 5th in the next, keeping his and his car together while many around him had troubles. Just 8th place would net him the championship if Bailey won so he knew what he needed to do.

Sunday was the last gasp of the championship and all four contenders were still in the fight… although not for too long as first to fail was Marsden who ground to a halt at the top of the rock climb. Following close behind and going too fast to do anything about it Guerton slammed into the back of him… followed by Cole. As an indication of how tight the racing was they were followed by the two ORA IFS cars, Burmann hit Cole's car so hard that it bent the spare tyre holder so much that later Cole complained that Burmann had shortened his car by 40cm. No one could move until Butler, at the back of the pack, backed up. But this time Butler took the heat win, also granting him pole position for the final race… which he duly led, and managed to build up a lead of over two minutes. But after a pit stop he caught up with Burmann who was struggling in two wheel drive after the driveshaft CV joint had failed. To help his team mate finish Butler pushed the sister car over the rocks and put him on tow rope to get through the mud section. Cole, who had made up the deficit, saw what was happening and let Butler finish helping before resuming the battle once again… But it was one Butler drove away from to take a convincing win. However his 5th and 9th places on Saturday put him out of contention unless something happened to Cole or Janssens.

Not the first to cross the line all weekend it was however that consistent driving of Cole that won him the event, his second of the year, but apart from winning his championship chances weren't in his hands… 2nd place went to French driver Guerton, a driver we will undoubtedly see more of next year, while a fine 3rd went to the beaming Axel Burmann who has finally found a machine he can match the best in, and the popular Belgian will surely be another one to watch next year.

But consistent over the whole season was Janssens who with two 5th places on Sunday came in 5th overall, three places higher than he needed, and so became the 2017 Maxxis Ultra4 Europe championship.