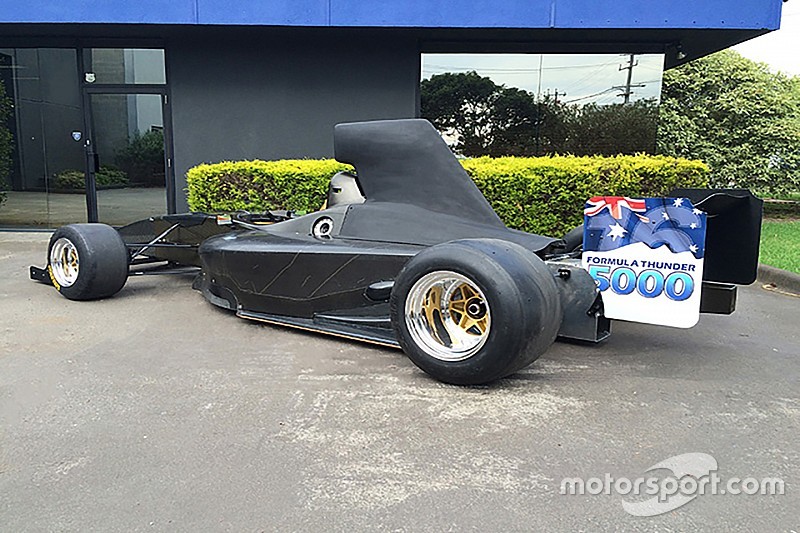 Big-banger open-wheeler racing could be returning to Australia and New Zealand thanks to the launch of the brand new Formula Thunder 5000 category.

Led by former Australian Touring Car Championship privateer Chris Lambden, the category is aiming to re-create a summer Tasman Series, with a seven-round championship, part in New Zealand, part in Australia, to run over December and January.

The prototype, which has been put together by open-wheeler builder Mike Borland in Melbourne, is based on a Swift Formula Nippon chassis powered by a five-litre, 570 horsepower V8 engine, with a total weight of around 680 kilograms.

“This has been quietly evolving for two years,” said Lambden, “ever since I had the opportunity to race a historic F5000 car myself.

“Everywhere we went, the reaction was the same – that is, that this was the best thing ever in Australian motorsport and what a shame there wasn’t something like it now.

“I eventually started to take that on board and decided to see if there was any way a sensibly cost-controlled, modern version of the greatest open-wheeler formula in Australia’s motorsport history, outside of F1, might be possible – and that’s what I believe we’ve come up with.

“Hopefully, a new generation of talented young drivers will get to experience the kind of mind-blowing performance that Alan Jones, Kevin Bartlett, Spencer Martin, Warwick Brown and the other stars of that 1970s generation did ... and which motorsport fans loved.

“The FT5000 car will be a seriously challenging, powerful, fast, open-wheeler race car to drive, and the sight and sound of a grid full of them getting off the line should be awesome.”

Apart from the original chassis, much of the prototype is Australian made. The quad-cam engine has been developed by InnoV8 in Brisbane, the chassis modifications done by ex-McLaren composites engineer Lee Cason in Melbourne, the six-speed sequential gearbox coming from Holinger, and the control damper package being designed by SupaShock in South Australia.

Three-piece wheels have been sourced from New Zealand company Arrow, while the FT5000 will run Chinese-made Giti tyres as there were no suitable options in Oz or NZ.

Further chassis will also be manufactured in Australia, FT5000 organisers having purchased the tools and moulds from Swift.

“The over-riding aim has been to keep the costs – both of initial car and then running costs – as reasonable and controlled as possible, to make FT5000 as accessible to as many teams and drivers as possible,” added Lambden.

“So, the chassis, engine, gearbox, wheels, brakes, tyres and shock absorbers are all single-brand – but packaged into a car which will have spectacular on-track performance. The overall car spec will also be frozen for a minimum of four years.

“We’ve been able to assemble a group of highly talented and skilled Australian and NZ companies and individuals who are, between them, supplying most of the components and expertise going into the car, which, we expect, will be a great advertisement for the Australian motorsport industry.”

The fate of the series now rests on competitors putting in orders.