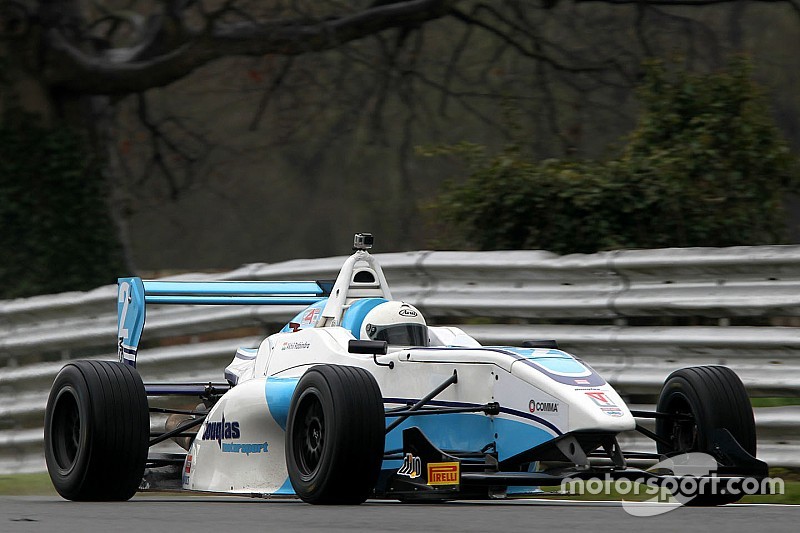 Rabindra driving for Douglas Motorsport and Vaidyanathan driving for Hillspeed had a mixed weekend in the fifth round as they continued their learning curve in their career.

Starting off the weekend with four practice sessions; Rabindra finished 12th, 11th, 15th and again 15th respectively. This was the first time, he was driving at this circuit.

Vaidyanathan, on the other hand, finished 10th, eighth, 11th and 13th respectively.

Moving on to qualifying on Saturday, Vaidyanathan finished 12th with a time of 1m26.537s which was 1.852s off the polesitter Will Palmer of HHC Motorsport.

Rabindra was 13th behind the fellow Indian; 1.912s off Palmer. He had a spin at the end of the session which brought out the red flag. Harri Newey was second while Ciaran Haggerty (Ecurie Ecosse) slotted in at third.

Race one didn't go as per Vaidyanathan's plan as he crashed out at Druids when he made contact with Lanan Racing's Jack Bartholomew, on the first lap of the race.

After the race, Vaidyanathan spoke to Motorsport.com and said that he was hit by Bartholomew but was confident that the car will be fixed for Sunday's race.

Meanwhile, Rabindra had a relatively quite race finishing 11th as he was stuck behind Rodrigo Fonseca (Lanan Racing) for the better part of the race.

The race was won by Palmer while Haggerty was second and Tom Jackson (Chris Dittmann Racing) completed the podium.

It was an eventful race two on Sunday which was interrupted by two safety car periods. Rabindra was all set to finish ninth and score points until the final lap when he was taken out by Sisa Negebulana at Paddock.

While Vaidyanathan, having started from last, finished 12th in the race which was won by Jordan Albert with Newey second and Jackson third.

For race three, Rabindra started 12th and scored points finishing a quite 10th. On the other hand, Vaidyanathan who started 13th was penalised for a jump start which dropped him down the field and eventually he finished 14th.

Vaidyanathan lamented the jump start but was "happy" with the weekend. He feels it is a "step forward" in the championship and hopes for another podium.

Rabindra is 11th in the standing with 135 points while Vaidyanathan is 17th with 111 points; the championship moves to Snetterton in the third week of August.

Newey Jr: "My name doesn't give me much advantage"

Sophia Floersch: The 14-year-old girl worth watching for