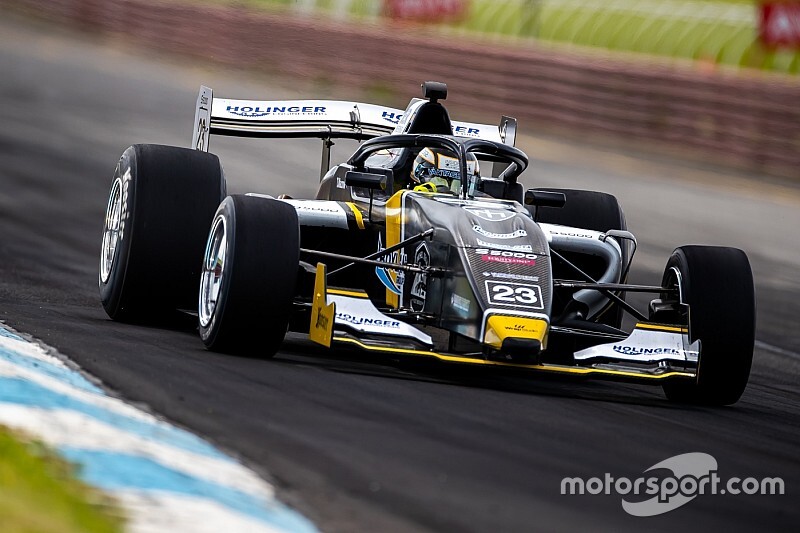 Macrow had to hold off a hard-charging John Martin in the closing stages of the race, the margin of his history-making victory just 0.4s.

He'll head into the second heat, which he'll start from ninth, as the qualifying points leader.

Star signing Barrichello, meanwhile, had his race compromised by a first-lap whack from Bart Mawer at Turn 1.

The Brazilian fought back to finish seventh.

Starting from the outside of the front row, Macrow took an early lead after out-dragging polesitter Martin to the first corner.

A blistering opening lap was wasted by a mistake into Turn 2 on the second lap, which let Martin get side-by-side and James Golding right on his gearbox for the run up the long back straight.

The trio staged an epic battle through the fast Turn 6, Macrow holding onto the lead as Golding ran Martin wide to grab second.

Macrow momentarily broke the field, getting more than 1.5s clear out front.

But Martin, who re-passed Golding at Turn 6 on Lap 4, came home strong, closing to within half of a second at the flag.

Golding rounded out the podium, followed by big mover Matt Brabham who came all the way from ninth on the grid. Will Brown did equally well, turning 10th into fifth, he and Brabham set to start tomorrow's second heat from the front row.

Alex Davison came home sixth ahead of Barrichello, who dropped all the way to ninth thanks to that first-lap contact before passing Mawer and Ricky Capo.

Tomorrow's second qualifying heat will determine the grid for the feature race.