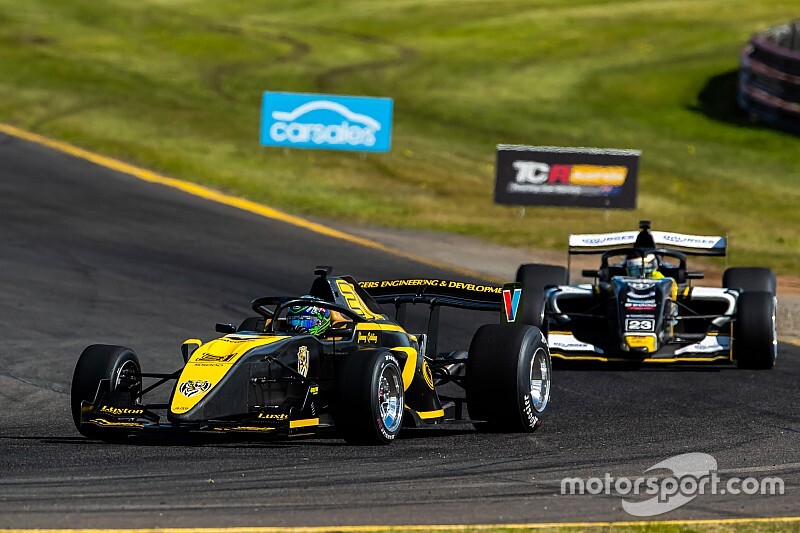 The Garry Rogers Motorsport Supercars regular made a fast start from seventh on the grid, tucking in behind early leader Brabham, who started from second.

While Brabham had control of the early phase of the race, his campaign unravelled on Lap 5 when he locked up into Turn 9.

The resulting trip into the wall left his car with a broken right-rear wishbone, his race effectively over on the spot.

That was good news for Golding, who took over the lead ahead of Race 1 winner Tim Macrow.

Macrow kept the pressure on Golding across the remainder of the 16-lap journey, but was unable to find a way past, Golding taking the win by four tenths.

"I got an awesome start there," said Golding. "I's really tricky to get these things off the line so it shows when you nail it, it makes a difference."

Macrow added: "I sat behind Jimmy and I thought I'd try and keep the pressure on and see if he made a mistake, and he didn't, to his credit. He did a really good job."

John Martin was electric on his way to third place. Starting 10th thanks to the convoluted qualifying system, the AGI Sport driver pulled the move of the race when he went around the outside of Alex Davison at Turn 6 to grab third spot.

Davison came home fourth, while Rubens Barrichello won out of a battle with Will Brown over fifth.

The Brazilian was forced to recover from a slow start thanks to his engine cutting out on the run to the first turn.

The V8 unit came back to life once around the corner, Barrichello able to rescue a decent result.

Macrow and Martin will share the front row for the feature race, followed by Golding and Barrichello.

Brabham, meanwhile, will start down in 10th thanks to that costly mistake.

"These cars are quite difficult to drive and I’ve just been trying to learn so quickly in a short amount of time," he said.

"I was in the lead and felt comfortable and I was just trying a few things differently.

"I just need that last bit of time out of it. I was pushing a little bit too hard and went to deep, and once you lose it in these thing it is so hard to gather it back up."