At Silverstone this afternoon, 16-year old American Connor de Phillippi (Team USA Scholarship) completed an impressive weekend by winning the 2009 Walter Hayes Trophy despite coming under tremendous pressure from Robert Barrable and Felix Fisher, both veterans of this event. The American had started the event as one of the likely favourites, and didn't disappoint, following in the footsteps of last year's winner, Connor Daly, even down to driving the same car. 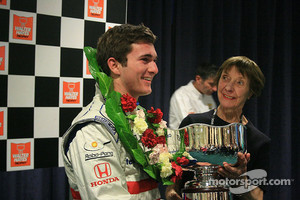 A brief explanation of the format may prove helpful before we start. From each of the heats, the first 11 drivers were guaranteed a place in one of the two semi-finals. Anyone finishing 12th to 16th would go into the Last Chance Race and the top six from that race would get a semi-final place. Anyone finishing 17th or further back would go into the Progression Race, from which the top six would be promoted to the Last Chance race. Confused? Hopefully not!

Heat 1: Noel Dunne made a good start from pole and held the lead all the way to the flag, trailed by David Grady, the pair of them dropping Patrick McKenna as they tore into Copse for the first time. McKenna fought back, eventually reclaiming 2nd just before the end, but not before he'd had to fend off both Mark Donnelly, and Julian Westwood, the latter proving a particularly tough proposition until he was sidelined by an electrical failure one lap from the end. Meanwhile behind the front runners, there was mayhem. The track was proving incredibly treacherous, with an oil slick occupying most of the inside line at Luffield. One wrong move and you were off in the gravel, from where, if luck was on your side, the burly marshals would extract you and send you on your way.

Heat 2: This time all eyes were on Josef Newgarden, the youngster having qualified on pole by a massive margin. However, it was Tom Bradshaw who snatched the lead at the start. Newgarden set about trying to reclaim the lead, getting his van Diemen RF92 all crossed up as he went on the attack. On lap 4 it all went pear-shaped though. The pair of them got very sideways, and spun out of contention, letting Adam Quatermain through into the lead. Bradshaw was out now, while Newgarden was rescued by the stalwart marshals and was able to set off in pursuit of the rapidly vanishing pack. He would end up 16th, a long way back from what anyone would have expected. Quartermain, meanwhile, was under pressure from Barrable, and would eventually have to concede, finishing 2nd ahead of Jonathan Hoad.

Heat 3: With conditions steadily improving, life was a lot pleasanter for all. Stuart Gough claimed the lead at the start, and would emerge as the winner 8 laps later, despite the best efforts of Glynn Geddie and Marcus Allen, the latter proving mightily impressive given his youth and inexperience. Geddie got ahead for a while, but Gough wasn't having it and barged back through, while Allen went out at the halfway mark, handing 3rd to Scott Fraser. Further back there was a storming fight for positions 12th, which resolved itself when Stuart Kestenbaum fell off on the last lap. 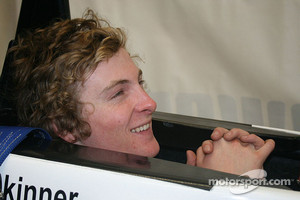 Heat 4: Bret Smrz (Team USA Scholarship) was the runaway winner of this heat, the young American getting ahead at the start and never being seriously challenged. Morgan Dempsey gave it a go, but ended up crashing out instead, and Oliver Bull (Wayne Pool Racing) Mike Bennett, and Jordan Skinner were so busy fighting each other that Smrz was able to streak away into the distance. The battle for 2nd eventually involved a whole gaggle of cars, but it was Skinner who came out on top, the impressive young Australian setting the fastest lap as well. Bennett was later disqualified for a yellow flag infringement, promoting Bull back up to 3rd.

Heat 5: At the top of the order de Phillippi and Rory Butcher fought it out for 8 laps. Setting a furious pace, and swapping positions frequently, the pair of them took less than three laps to catch up with the man at the other extreme of the talent spectrum, Kaiser Razzaq, who was 30 seconds off the pace in qualifying and should probably not have been allowed to start the race. It was lucky for the front runners that he did at least seem to understand the importance of looking in his mirrors... De Phillippi missed out on a win after a quick trip through the gravel, finally beating off Matthew Parr, while the Fisher brothers, Josh and Felix, finished 4th and 5th respectively, Josh claiming fastest lap into the bargain.

Heat 6: Potential front runner and firm WHT favourite Joey Foster surprised everyone by pulling into the pits as the rest of the pack lined up on the grid. He would start last as a result. While the Cornish man played catch up, at the front Neville Smyth, Ivor McCullough, Benji Hetherington and Peter Barrable fought for the lead. Smythe (who was described as incredibly unlucky - as in "if he became an undertaker, people would stop dying") was the eventual winner, after the others all lost ground. Foster, meanwhile, fought his way back to 11th, thus ensuring that he would go straight through to the semi-finals.

Progression Race: The progression race contained a number of drivers who had been unlucky in the heats, mostly lined up behind a handful of drivers who were just plain slow. This explained how it was that Allen came charging up from the mid-field to claim the lead early on, where he immediately came under enormous pressure from Westwood and Bradshaw, the team-mates following him through. Bradshaw led briefly but Allen came back at him, and he then had to concentrate on holding off Westwood. He was given some respite when Westwood decided he'd better not try anything too robust on the grounds that Bradshaw's family had helped him to get into the race. However, "if we both get to the semi-final, then all bets are off". The remaining places in the top 6 went to Nelson Rowe, who had missed Saturday's heats altogether, Cormac O'Neill and Ed Moore. 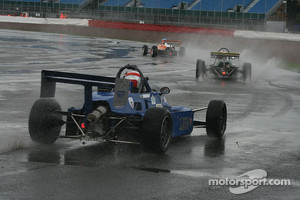 The line through Luffield was awash

Last Chance Race: 36 cars and only 6 of them would go through. This had the potential for being great fun! And so it was. Starting from row 13 was Newgarden, who was definitely one to watch, and so it proved. By the end of lap 1, Newgarden was in front, clearing 26 places in less than a minute, and he wasn't the only one to get a rocket-powered start. Westwood and Bradshaw were right up there too, as was Rowe. While Westwood set the fastest lap, Newgarden simply pulled ahead anyway, and was never challenged in what he deemed a very dull race. The other two going though were Jonathan McMullan and Moore, after Allen's impressive run came to an abrupt halt on lap 5.

Semi-Final 1: After a relatively incident-free morning, this was a race of attrition, the trouble starting early on when a host of drivers ended up in the gravel, among them Westwood. Foster was involved but managed - as he did last year - to drive back out again, though he was almost last as a result. Avoiding it all was Newgarden, the American beginning his second recovery drive of the day by finding himself 15th when the dust settled. At the front it was all change too with Smrz, Robert Barrable, Neville Smyth, McCullough and Skinner all scrapping for the lead, Smyth snatching it from the American teenager, only to have Barrable come past both of them before the end after McCullough went off. Newgarden continued to push hard, meanwhile, eventually ending up 5th after he got the better of Quartermain a lap from the end. He wasn't the only one to managed a last ditch charge - Foster had recovered from his gravely moment and was pushing hard, knowing he had a lot to do if he wasn't going home early, a prospect he really didn't care for. A couple of mistakes by other drivers finally promoted him to 15th, just enough for him to go through. It wouldn't really seem right for the three times winner of this event to go out before the final, after all.

Semi Final 2: Taking a lead from Semi-Final 1, there was trouble at the start again in this race when de Phillippi and Gough tangled and Gough was launched into a terrifying roll, ending up upside down on his roll bar deep in the gravel trap. The marshals sprang into action and soon had him out of the car, and he looked OK but shaken as he was ushered into the medical car and taken away for a quick check up. What followed once the yellow flags were taken back in was a titanic battle for 3rd. While de Philippi edged away by degrees from Butcher, behind him the Fisher boys, Grady, Parr and Dunne were trading places, the pack only breaking apart a little towards the end when Butcher went out, leaving Felix Fisher to claim 2nd, from Grady, Parr, Josh Fisher and Dunne. Meanwhile, Bradshaw was another who was out of the event, despite a great run to get as far as the semis. 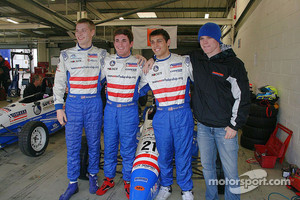 Final: Having got the hooliganism out of their systems, the main event was still fiercely fought but apart from two retirements all the drivers finished. De Phillippi got away well, but Barrable and Felix Fisher went with him, and when he made a mistake at Luffield they both went through. The youngster kept his calm though and set about regaining the lost places, driving with a maturity beyond his years to get back ahead of the more experienced pair. Behind them initially, but soon on their tails, were Smyth and Grady, the battle intensifying as more people got involved. Smrz, meanwhile, had a small flying lesson that left him with damaged suspension and a less than perfect car and meant he ended up a somewhat disappointed 9th. That helped Newgarden and Skinner, the two of them having a race long fight for 6th, swapping places over and over again. Eventually they too found a friend to join them, in this case Ben Norton, but in the end it was all about the two of them. Newgarden finally came out ahead, but Skinner appears to be equally talented. Certainly anyone who can give Newgarden a run for his money in Fords should be taken very seriously indeed. The day, however, belonged to de Phillippi, the youngster taking an impressive win from Robert Barrable and Felix Fisher. Whoever is responsible for choosing the Team USA drivers clearly recognizes talent when they see it.