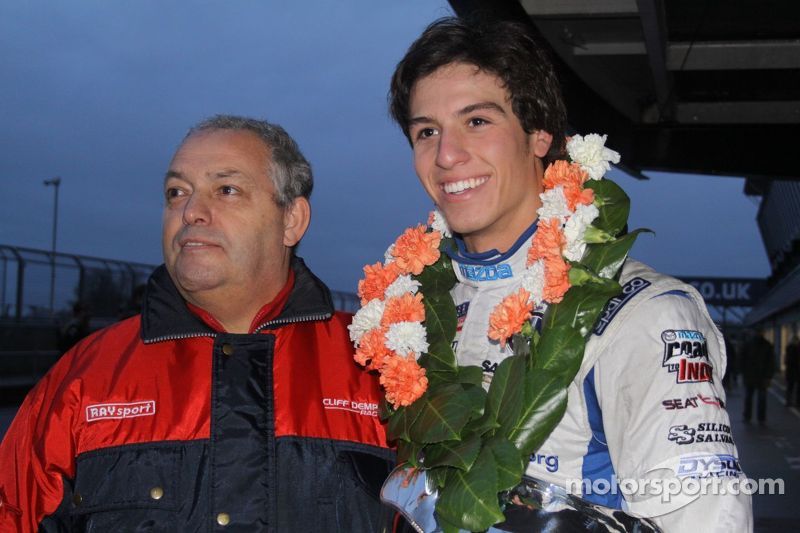 Team USA brought home a surprise victory at Silverstone this afternoon when the twelfth Walter Hayes Trophy again provided thrills and spills galore, the title eventually going to Tristan Nunez and Cliff Dempsey Racing, the youngster proving himself a match for three times winners Peter Dempsey and Joey Foster and seeing off Ivor McCullough and John Martin (Mark Bailey Racing) in a tense final that had to be shortened to 12 laps after weather seriously delayed the events of Sunday. It would have been a brave person who would have bet on Nunez in that sort of company, given his inexperience. 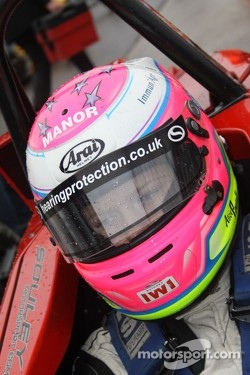 However, we should first turn our attention to Saturday’s events, and the six heats that would see the first 9 drivers go straight through to one of Sunday’s semi-finals with the rest getting a second (or even third) chance in the regression race on Sunday morning from which six drivers would make it into the last chance race. The top 18 drivers from that would make up the back rows of the semi finals grid and thus get a chance of making it to the final if bad luck struck on Saturday.

In freezing cold, slippery conditions, the first race of the weekend saw Robert Hall get the drop on Callum McLeod, who then spent the rest of the race locked in a four-way scrap with Alice Powell in her first ever Formula Ford race, and WHT regulars Felix Fisher and Robert Barrable. The more experienced runners eventually got the better of Powell and she finished 5th, though not without putting up a superb fight. Fisher ended up 4th while Barrable battled his way up to 3rd, and McLeod briefly broke away to challenge Hall for the lead, only to have Hall come back in the later stages to claim victory, leaving McLeod 2nd.

With the sun now out – though the wind was bitter – McCullough was the man to beat in the 2nd heat, streaking away from what became a somewhat processional queue that eventually saw Oliver White claim 2nd from Luke Cooper, and Nunez in 4th, the latter learning fast and managing to hold off David Quinn in the closing stages of the race, Behind them Josh Barnett tried to progress up the order but managed to slide off and undo all his good work, just hanging on to 6th place.

Heat 3 was a cracker of a race with a ding-dong battle between Neville Smyth, Graham Carroll and Ben Mitchell. Smyth emerged the winner, from Carroll and Jack Mitchell Jr (the other Team USA driver this weekend) also got into the mix. Mitchell was the one to run into trouble in this race, clashing with Carroll while leading. Mitchell ran wide and limped home in a disappointed 12th, and Carroll struggled to hold on to 2nd after Smyth saw his chance and nipped through to take the win while Mitchell finished a respectable 3rd, a good effort form the 16-year old. 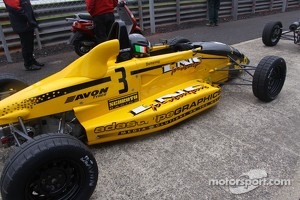 The surprise result of the day was in this heat when Peter Dempsey, who will race in 2013 in the Indy Lights series, was beaten to the flag by Ben Norton in an unexpected turn of events. Dempsey didn’t make it easy for him and in fact led the race for the first half, while Norton had his hands full holding off Martin, the Australian stepping down from the FIA World Endurance Championship where he currently runs to have a little fun on a rare weekend off. Norton forced his way into the lead at Brooklands and spent the closing laps with Dempsey looming large in his mirrors in what looked like a major upset to the formbook.

There was drama aplenty in the fifth and penultimate heat. It started on lap one when Josh Fisher started from 11th and was up to 6th by the end of that lap. Meanwhile Noel Robinson was leading by a whisker from Stuart Gough, despite yellow flags at Becketts after Tom McArthur went off. A lap later and Fisher was 3rd and all over Gough, and it didn’t take him long to find a way past. He was soon challenging Robinson for the lead, taking it shortly thereafter. Robinson fought back, the pair clashed and Robinson went off, eventually recovering to finish a distant 19th. Michael Moyers took advantage of the chaos to nab 2nd, from Gough and Orgee but man of the race was Fisher, making up 11 places in 8 fast and furious laps.

With the sun dropping rapidly towards the horizon this was going to be a tricky race. As it turned out it was more than slight dramatic too. Neil Winn was the early stage leader but he couldn’t hold off Noel Dunne, or Joey Foster, the latter determined to wrestle a somewhat recalcitrant car as high up the order as he could. He couldn’t match Dunne though he did snatch the lead for a couple of corners even though he knew he wouldn’t be able to hold onto it. So it proved and he slipped back to 2nd and a huge battle with Winn, Kevin O’Hara, and young Canadian Garett Grist and Doug Crosbie. It all went wrong a lap from the end though when Winn and Foster clashed, dropping them to 5th and 6th respectively. 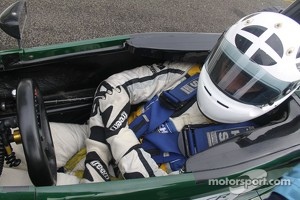 Sunday’s events were badly delayed after a deluge in the morning (with added snowstorm) after what seemed to be Hurricane Sandy’s little brother hit the Silverstone area. With the track deep in water and the temperature hovering just above freezing, the race officials had no choice but to hold off running the first races until they could pump some water out of the deeper lagoons littering the track. Eventually, nearly three hours late, things kicked off with each race curtailed by a handful of laps in an effort to get through before it got too dark or the spectators collectively succumbed to hypothermia.

The first semi final saw 35 cars line up in the sodden conditions. Ben Norton was on pole but it soon became clear that this was all about Peter Dempsey. Robert Hall was also in the mix, but it didn’t take Dempsey long to battle his way up to 2nd, while further back Joey Foster was battling with John Martin for 4th. A lap later and Dempsey had the lead, and he then simply drove away from the squabbling pack, leaving Hall, Foster and Martin to claim the next three places in what eventually became a very strung out race. A late comeback from Hall kept Dempsey honest but he was never really threatened and was a comfortable winner, though Hall set the fastest lap. Robert Barrable was 5th, from Garett Grist, Falco Wauer, Noel Dunne, Norton and Neil Winn. It looked like we were set for an exciting Final. 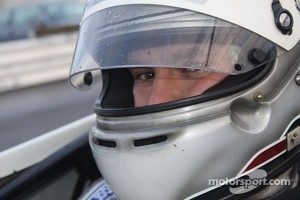 The second of the semi-finals, with 36 drivers on the grid, was equally exciting. With lots of wheelspin at the start, Neville Smyth and Ivor McCullough were slugging it out for the lead, but so was Josh Fisher who was up to 3rd very quickly indeed despite Luke Cooper’s best efforts and despite the fact that he only entered the event on the Friday night. Certainly Foster was running strongly before a clash with Graham Carroll pitched him off. His only consolation was that Carroll ended up dead last, whilst he was able to drag the car home in 9th, just behind Jack Mitchell Jr. Meanwhile Tristan Nunez had held his nerve and was up to 4th, a fine result for the youngster given the calibre of the competition he was up against. McCullough, meanwhile, had now broken away and was opening an every increasing gap to Oliver White and Michael Moyers, while Nunez held off Stuart Gough to the flag. Roger Orgee was 6th from Smyth, while Mitchell Jr ended the race in 8th, and Fisher and Cooper rounded out the top ten.

And so we came to the Grand Final, with the light going fast, and McCullough on pole alongside Dempsey. It was bound to be a fiercely fought race, but no one could have guessed how fiercely it would be contested. McCullough once again had issues with wheelspin, and that was all the invitation Dempsey needed to push past into the lead, White going with him. Meanwhile Foster also got a good start, and was up to 3rd by the time they reached Becketts for the first time.

Dempsey, White, Foster, McCullough, Hall and Nunez occupied the first 6 places and the battle there was a heated one. Dempsey was mostly immune for the first lap or two, while White was having to fend off Foster, while Nunez had found a was past Hall and was setting about trying to find a way past McCullough. The youngster was clearly not intimidated by the reputations of those he was battling with, although McCullough might have wished he had been.

Three laps later and Foster was through to 2nd and catching Dempsey at an alarming rate. Not only that, but Nunez was now 3rd having beaten McCullough to the draw at Becketts. Martin was now in 5th having battled his way past Hall and Moyers and Mitchell Jr were also looking seriously threatening in 5th and 6th, or at least they were until Moyers went off. That left Martin to charge past Hall and start reeling in McCullough. Meanwhile Foster was all over Dempsey, and making repeated attempts to wrest the lead from him. If anyone was going to become a four-time winner of this event, Foster was determined it would be him and not Dempsey. The trouble was that it was no longer just Dempsey and Foster. Nunez had caught up with them and seemed keen to join in the fun.

Dempsey was thus aided in his efforts to hold off Foster by the young American in 3rd, while Martin was now right with McCullough and looking for a way past to claim 4th. Hall was in 6th ahead of Wauer, while Moyers had recovered from his wobbly moment to settle into 8th. He was ahead of Grist, while Barrable and Orgee where involved in a stand off with Mitchell Jr. Things were now really hotting up at the front though, as Foster made a series of challenges for the lead that didn’t quite stick, and Nunez nearly got through as a result, However, finally the Cornishman was through into the lead. Needless to say Dempsey met the challenge, only to have it all turn to dross when Foster went wide and they tangled. By the time they had sorted themselves out and limped into retirement, Nunez was through into the lead. 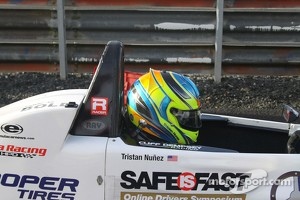 That promoted McCullough to 2nd, from Martin, Hall, Wauer, (Moyers, Barrable, Grist, Orgee and Mitchell Jr. It still wasn’t over though. A lap later and McCullough was ahead of the youngster. However, he still wouldn’t give up and he fought back, battling his way past McCullough and towing Martin with him. As the light faded and the chequered flag was unfurled, it was Nunez who came out of the final corner first, with Martin breathing down his neck, and McCullough in 3rd. 4th was Hall from Wauer, Moyers, Barrable, Grist, Orgee and Mitchell Jr. 11th was Smyth, ahead of Alice Powell, Noel Dunne, Felix Fisher, James Raven, Winn, Josh Fisher, Ben Norton, Cooper and Nathan Ward. The last 10 places went to Jonny McMullan, Adam Higgins, Ben Mitchell, Sam McLeod, Austin Kimberly, David McCullough, David Quinn, Josh Barnett, Richard Higgins and Dan Headlam.

The fastest lap of the race was set by Nunez.

Hulkenberg “more at home” in second GP with Racing Point