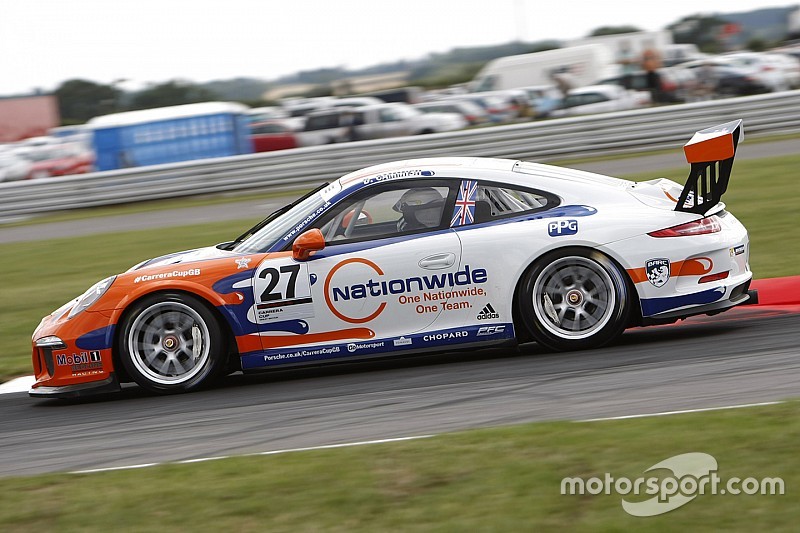 Dan Cammish led every lap of the first Porsche Carrera Cup GB race at Snetterton en route to a seventh win in nine starts so far in 2015.

From pole position, Cammish led away at the start from fellow front-row starter Josh Webster, who was immediately on the defensive against Tom Sharp after a slow getaway.

The reigning champion resisted as the pack headed into the Montreal hairpin to hang on to second, but James Sutton was less fortunate, forced to retire after contact with Stephen Jelley.

Cammish quickly established a cushion of two seconds over Webster out front, with Sharp unable to shake off Michael Meadows in the battle for third.

Double champion Meadows made the move at one-third distance and had Sharp in his mirrors for much of the remaining distance.

Meanwhile, Cammish extended his lead out front to over 2.5s before Webster began to edge closer in the latter stages, taking the chequered flag 1.4s down on the former Formula Ford champion.

Meadows hung on for third from Sharp, who missed out on a first podium finish of the year, with ex-BTCC racer Jelley making his way up to fifth after the first-lap clash with Sutton.

Dino Zamparelli and Jayde Kruger were engaged in a close tussle for sixth in the closing stages, but the latter spun out as he lunged to the inside at Williams in his bid to pass.